Learn Japanese with Tako is an Android app that, as you've probably guessed helps people of all ages learn how to speak and write Japanese. With a distinctive slant towards writing Japanese, which happens to be one of the hardest things about Japanese, Learn Japanese with Tako can teach users to use Hiragana, Katakana and Kanji up to the N5 level of the Japanese Language Proficiency Test (JLPT). Put together with the help of native Japanese speakers, this is an app that is serious about teaching users of all ages how to read and write Japanese. There's a simple to follow study plan, with lessons that are engaging and fun, as well as challenges and minigames which really help drill the subject matter home in a fun way. Let's take a closer look, shall we?

In order to get started, you'll need to download Learn Japanese with Tako from the Play Store. once you've done that, you'll be asked to input your name before moving on. 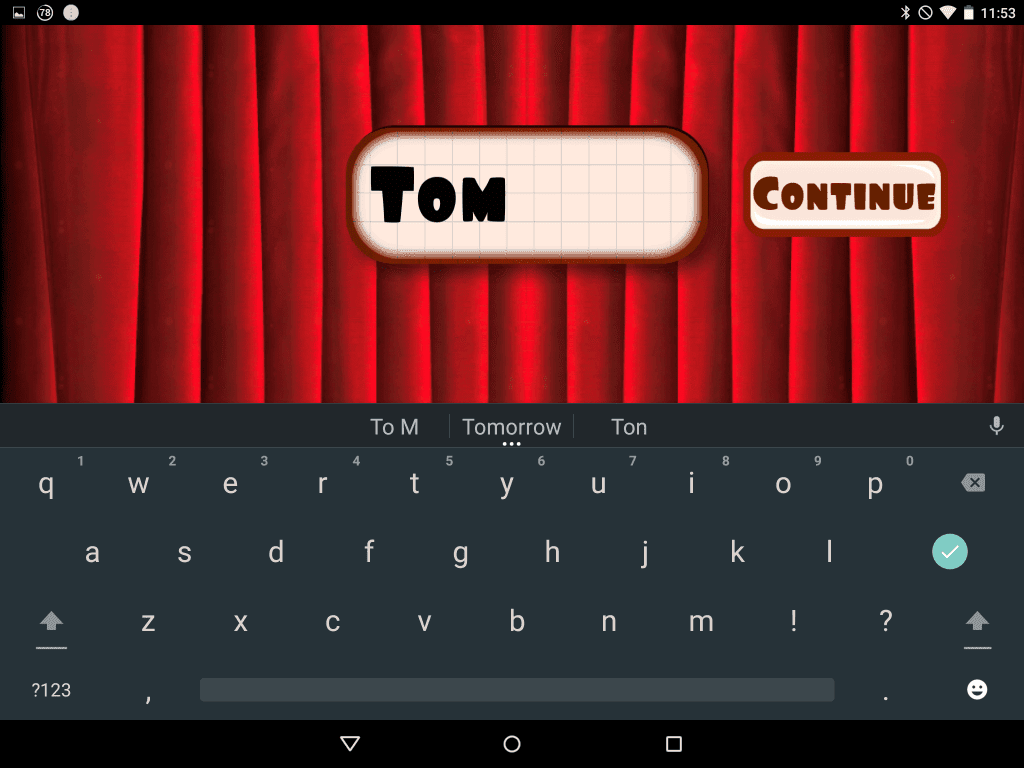 You can have multiple profiles with just one app, allowing teachers to use this on a shared tablet around the classroom or to share throughout the house. Each profile has their own history and how well they're doing. 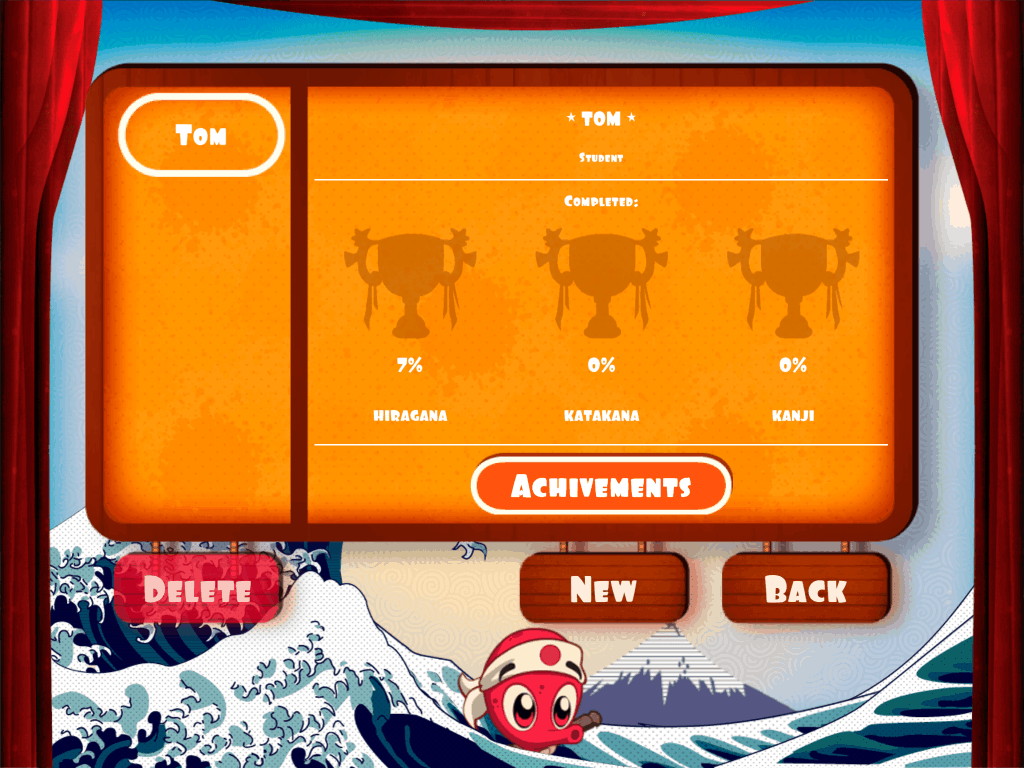 The Octopus Sensei will introduce you to many elements of Japanese that you'll learn throughout your time with the app and everything is easy to follow. 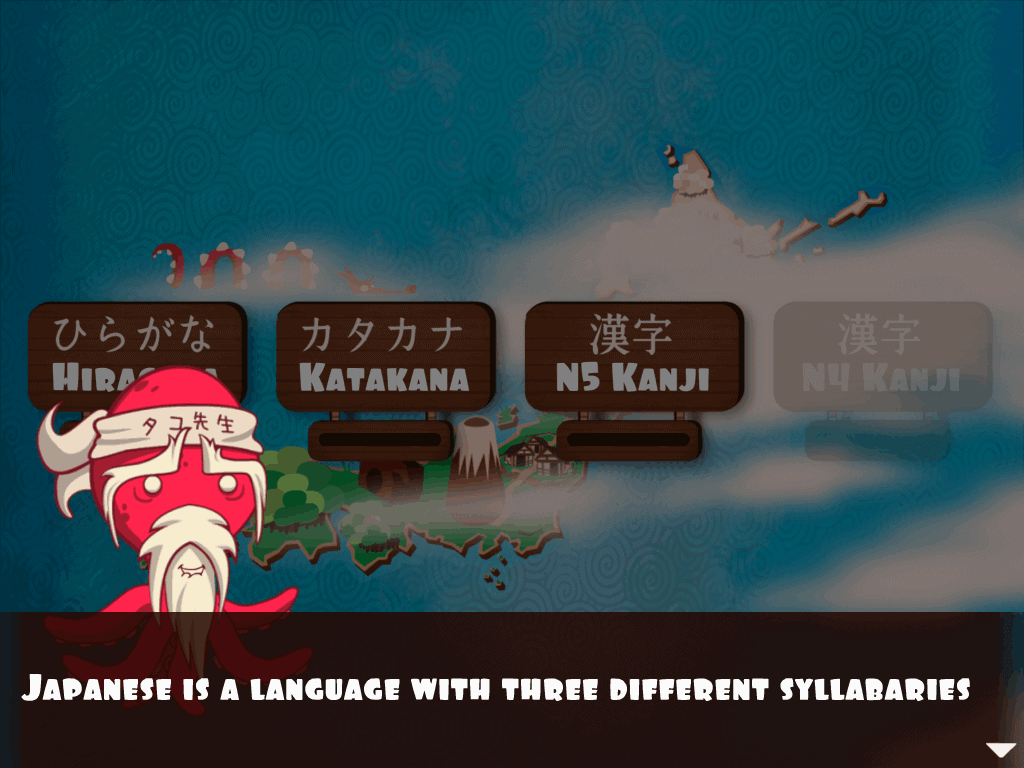 Right away, Learn Japanese with Tako gets off to the right start, teaching pupils how to learn Hiragana, which is the basis of everyday Japanese, and then moving them on to Katakana – traditionally used for Western words – and then Kanji which are traditional characters used for things like the data and other important aspects of Japanese. Kanji are extremely difficult to learn, so I'm glad to see that these have been saved 'til last. 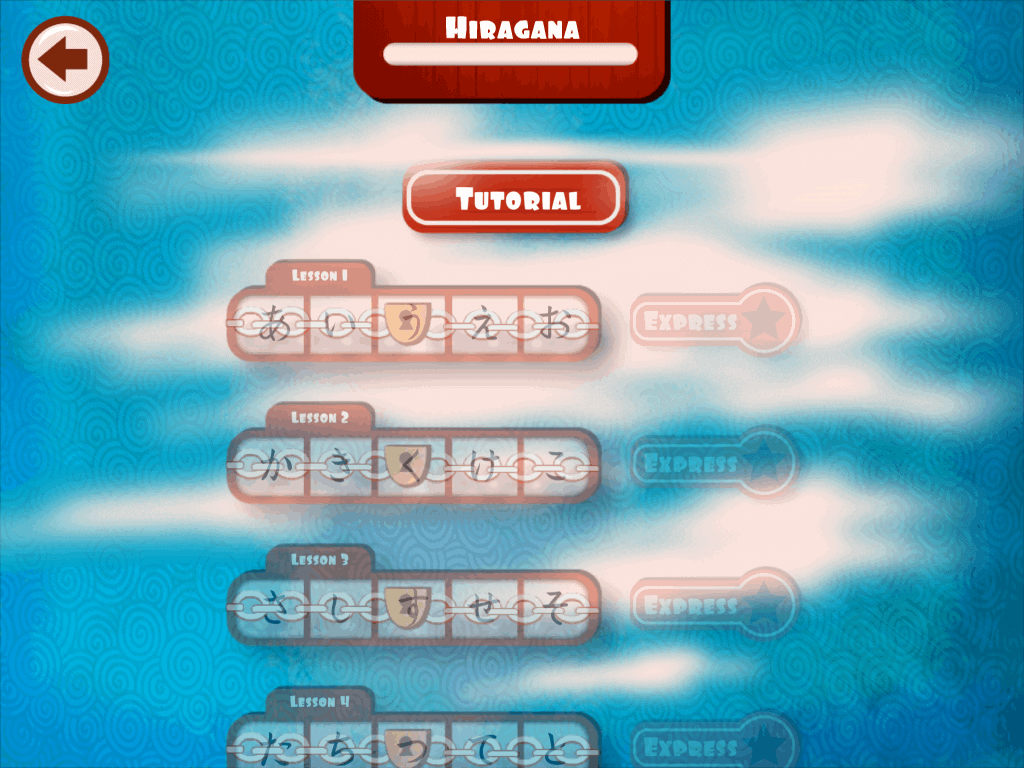 In each section for each Alphabet, lessons are broken up into different chunks of syllables. There's a tutorial on hand to help guide users, too. 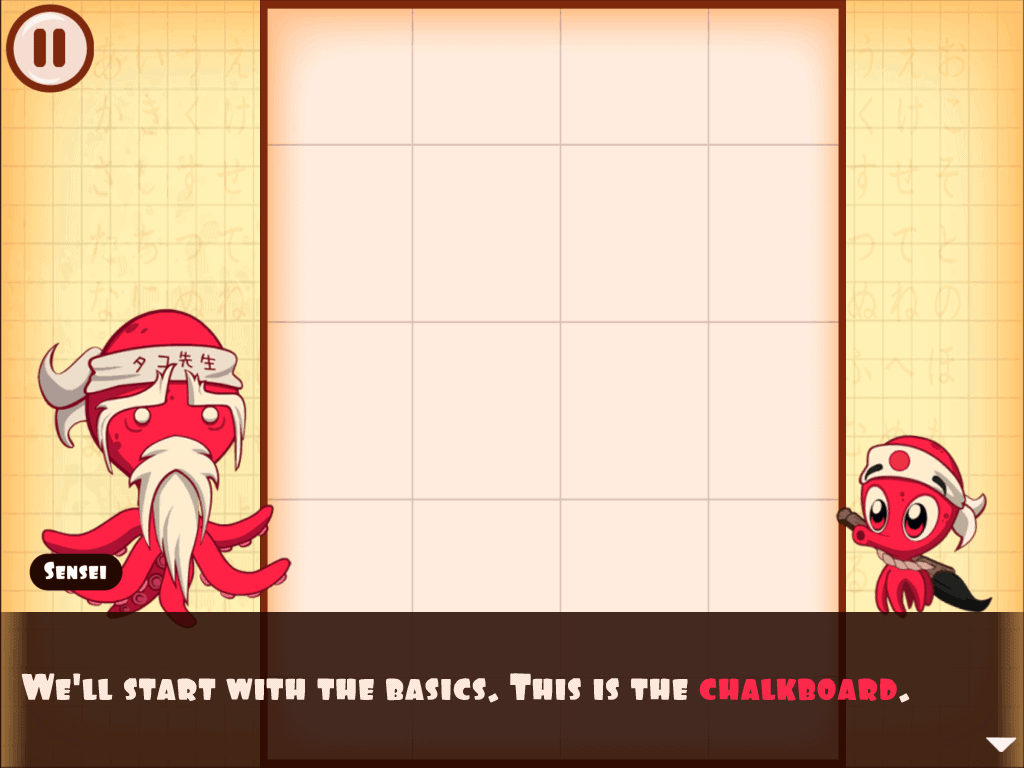 The Chalkboard is where you'll be spending most of your time, and thankfully, characters are mapped out in such a way that they're easy to follow along with. Here's my attempt at 'a' 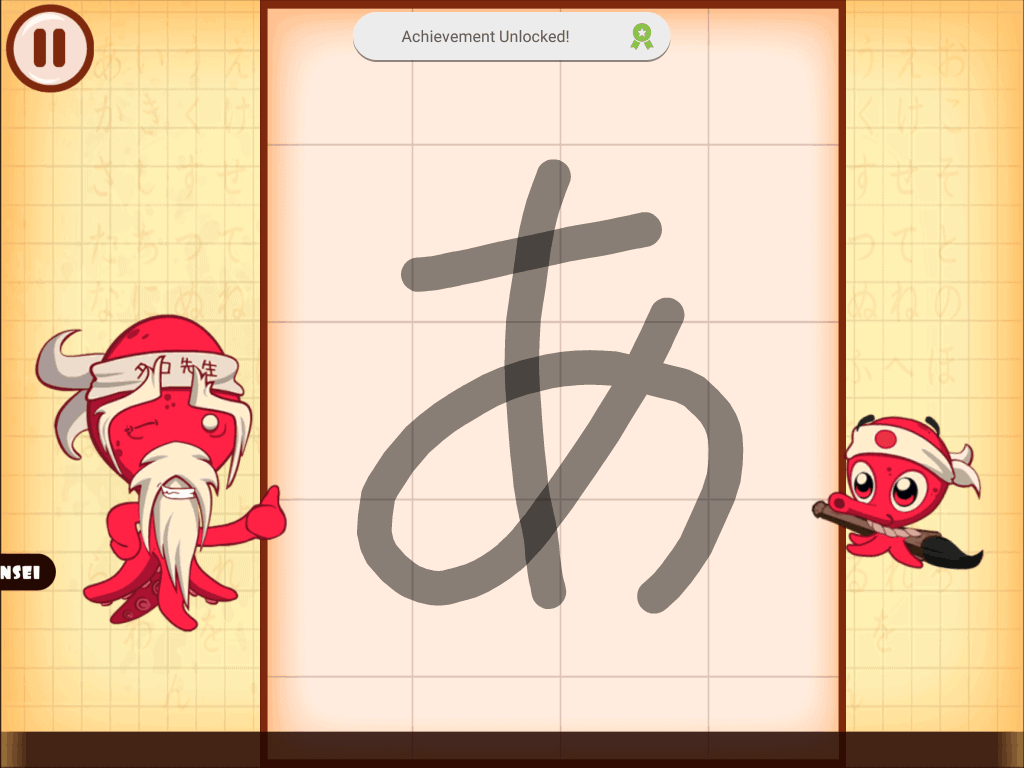 Much of the game goes on like this, you're asked to trace a letter or syllable and steadily you're given less and less help to remember them. This mechanic works fine, and the fact that the characters are read out fairly clearly in Japanese helps as well. What I really liked however, was the minigames. 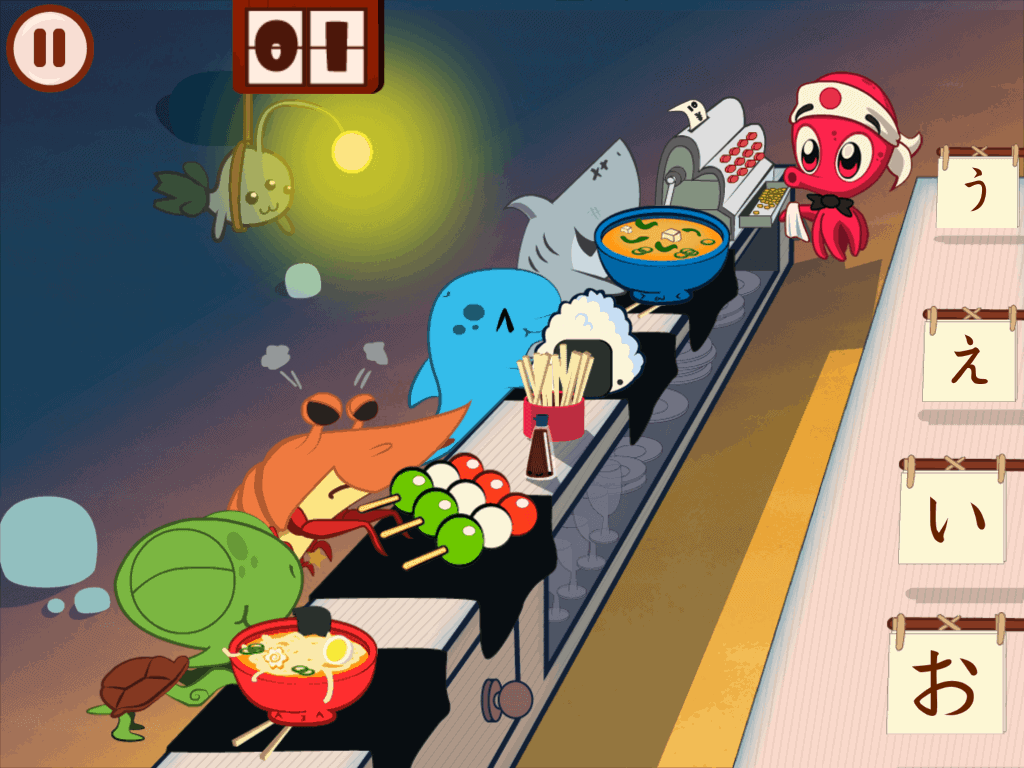 These minigames are excellent, and varied, too. Not only are they good fun, but they quickly and efficiently drill home the characters looks and which sound they represent. It makes picking up all these different characters a lot of fun, and if you just want to practice, you can choose to play the minigames at any time for the main menu. At the end of each lesson there's a quiz of sorts, and if you don't get the question right, you'll annoy your Sensei. 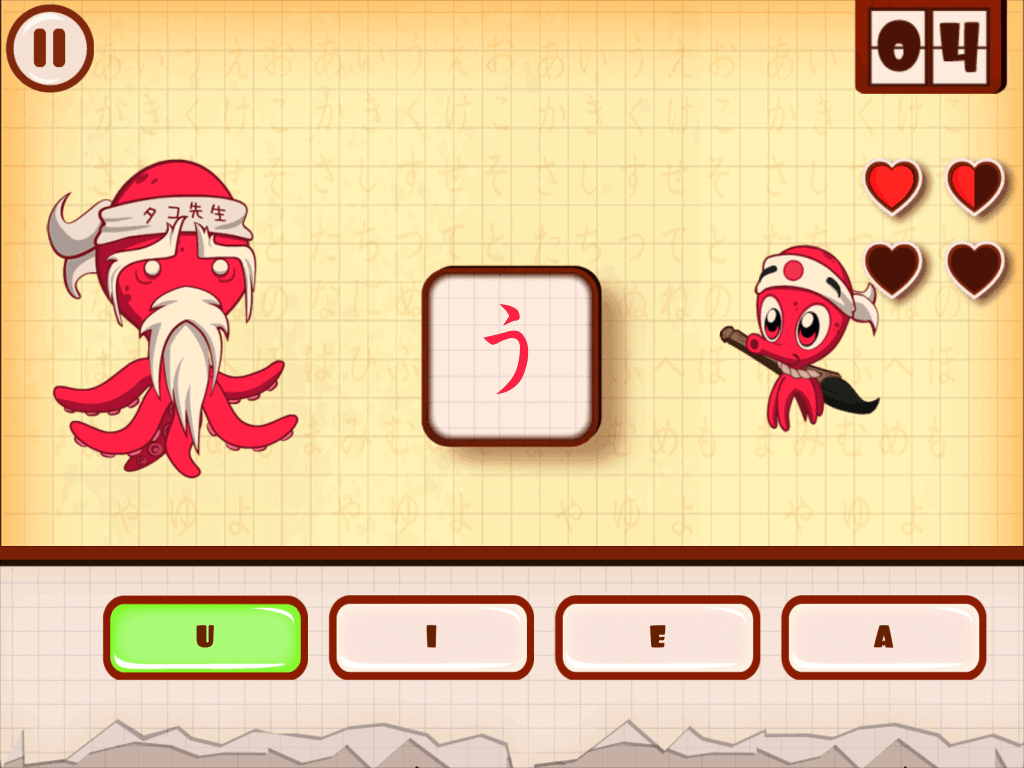 You're given a sort of report card toward the end of each lesson letting you know how well you know each character. Clearly, I've gotten quite good at this, and I'll go into why a little later in the review, 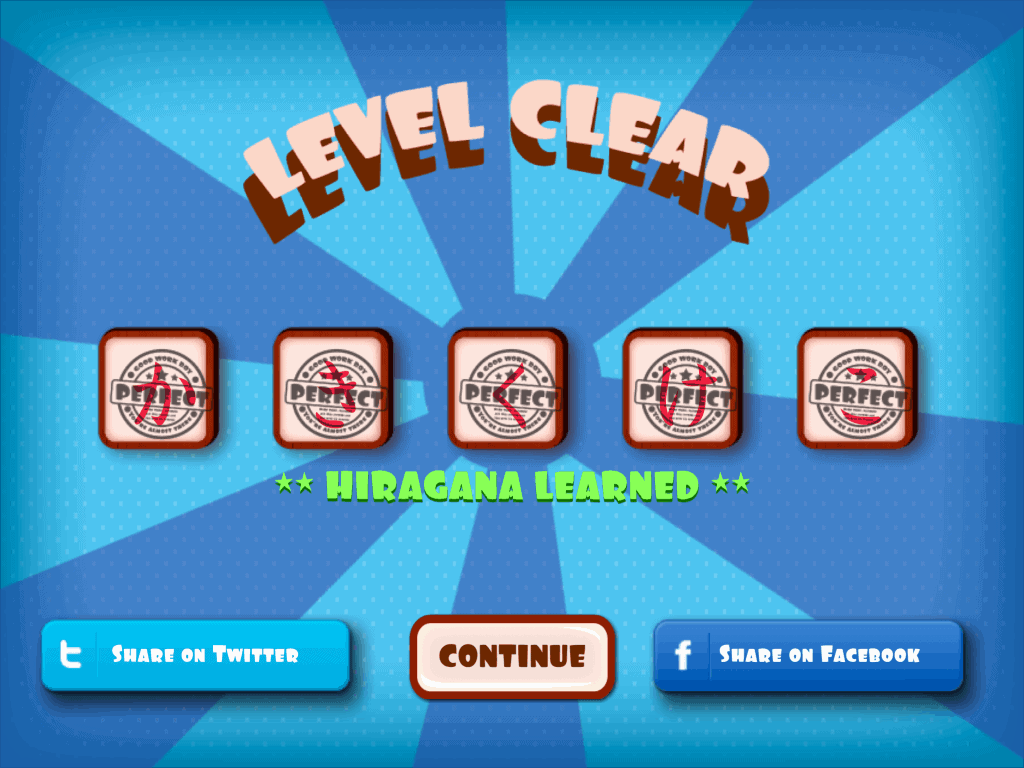 For those that need a little extra help, or just want to perfect a certain character they're struggling with, you can open the 'Study' mode from the main menu. This enables you to study just the characters on their own, be them Hiragana, Katakana or Kanji. 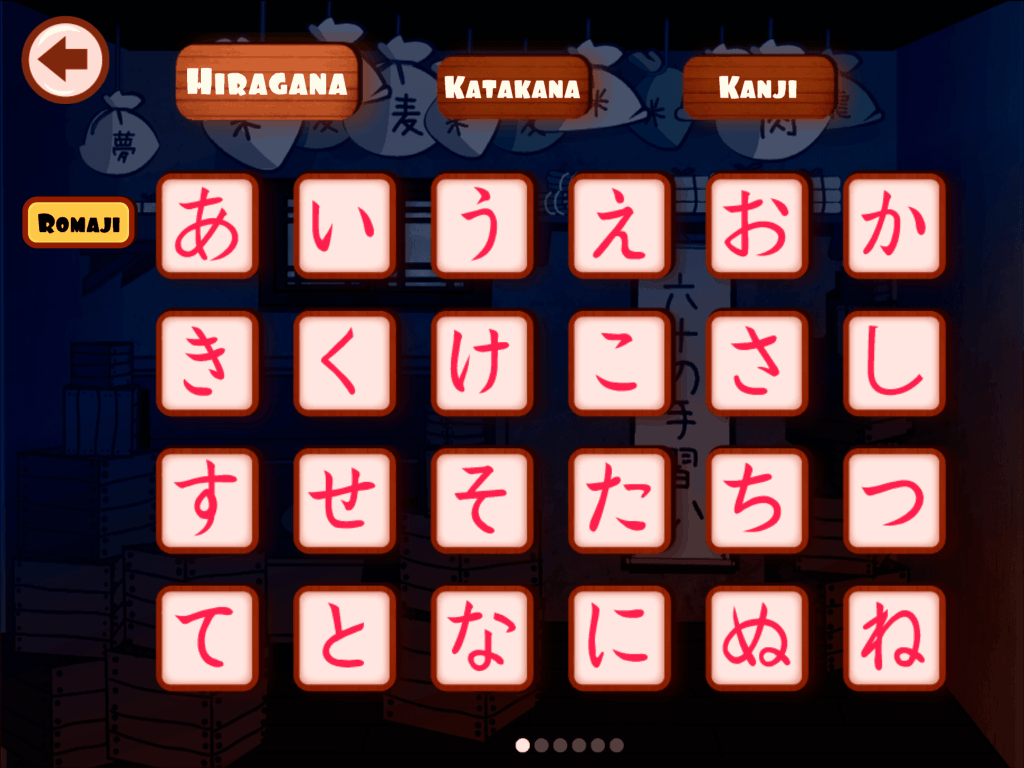 Let's take the letter 'e', this is something I've been struggling with a little bit, I can easily hear it over and over again as well as study the shape of it and practice writing it. 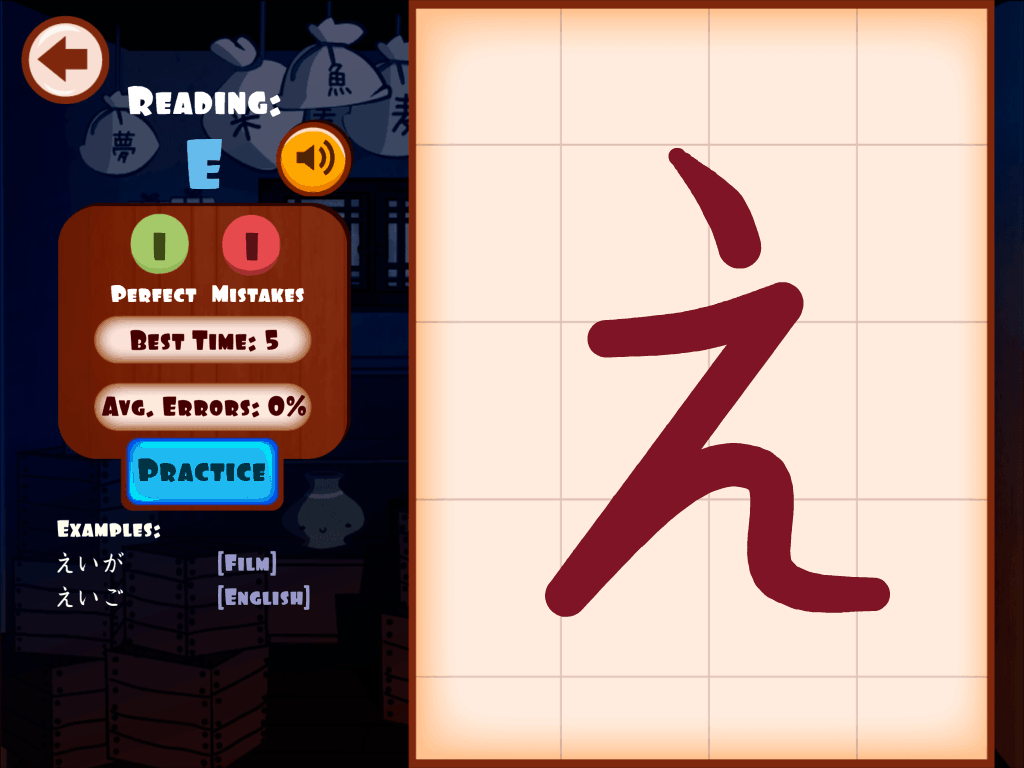 The reason I can score perfects like this when learning the Hiragana characters is that I actually spent two years learning Japanese. This was only at GCSE level in the UK (15 – 16) and of course now I'm 24 not much has stayed with me. I do remember struggling with writing characters outside the Hiragana alphabet though, Katakana I was okay with but boy, do I wish I had this to help me learn Kanji. Learn Japanese with Tako is not only fun, but it's accurate, there's a lot on offer here and the use of a touchscreen works wonders. I used a stylus with the game, and found to be the best way to pick up strokes and such. Throughout the whole game though, I could tell that this had been developed to a high standard. Working with native Japanese speakers and perfecting a system that will appeal to kids and adults alike makes this an excellent jumping-on point, no matter how old you are. The Japanese styling is also a great environment to learn in and overall, this is a great way for people to get started with Japanese.

While Learn Japanese with Tako might be considered a little expensive, it's certainly worth it. It's comprehensive enough to satisfy those seriously looking to learn the language as well as easy enough to get kids started. It's a game that I can see lots of people using to get started in Japanese, or like me, refreshing their memory. It's hard to explain without using it, but this is one title that makes learning a new language fun, interactive and there's never a boring moment as with sitting in classroom.