Softcard has not had the easiest of lives. The NFC mobile payment solution was the collective brainchild of AT&T, T-Mobile and Verizon. With a backing of three major U.S. carriers, it would have been thought that the option would have been more successful than it actually was. However, in 2011 along came Google Wallet and although Wallet has had its own issues, the two co-existing in the same time and space seemed to somewhat affect each other's growth possibility. While carriers opted to back their option, Google opted to back their option and thus a status quo came about. What's more, Softcard used to go under the name 'ISIS' which became a little unfortunate in more recent times which is what forced the company to change their name to the 'Softcard' in the first place.

Following on from all of this and fast forwarding to very recent times, back towards the end of last month, the news emerged that Google ended the status quo between the two, by snapping up some of Softcard's technology. This was not too surprising as Google had been working behind the scenes to reinvent Google Wallet and part of the reinvention involved getting carriers and manufacturers on board at the ground level. With AT&T, Verizon and T-Mobile all reported to be involved in the new Wallet, there was of course, no more need for them to hold on to Softcard. This was largely assumed to be the first step in a slow death for the Softcard service.

Well, the latest is that the death of Softcard looks to be happening much faster than anyone might have thought. It seems current Softcard users are now receiving emails stating that the Softcard app will be shutting down on March 31st. The email also seem to quite unceremoniously state that user accounts will be closed at the same time. It is also being reported that in anticipation of the app closure, the app no longer allows for new customers to sign up and the app will actually be pulled from the Play Store by March 16th. So all in all, it looks like this is officially the last few days and weeks of Softcard. Are you a Softcard user? Will you miss the service? Let us know 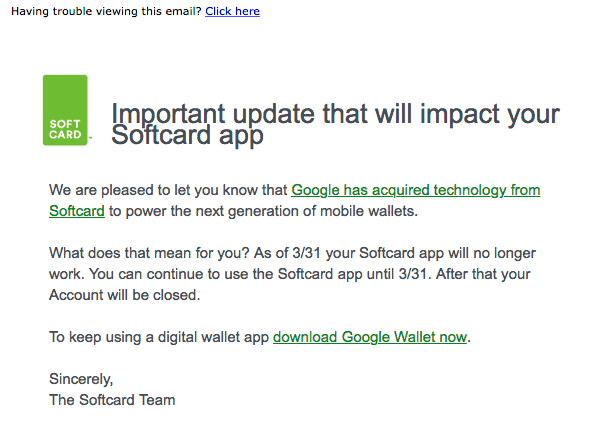