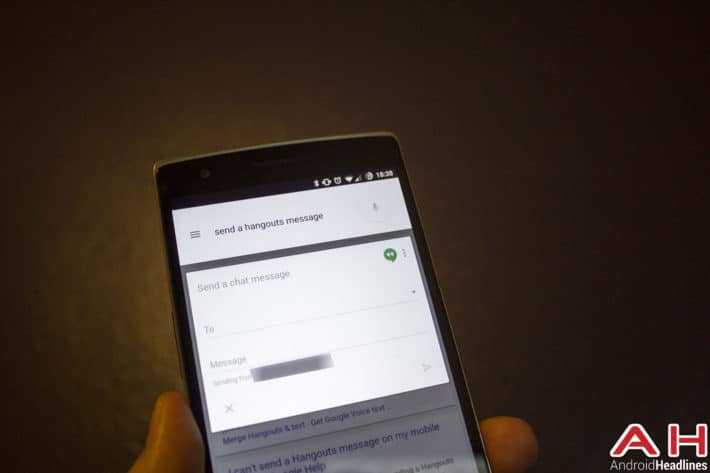 Google is a very strange company.  On one hand they’re usually at the forefront of innovation, always pushing what truly seems to be the next big thing in many respects.  Flying Internet balloons, self-driving cars, missions to Mars and who knows what else is going on behind the secret doors of Google’s labs.  There’s one thing that’s absolutely for certain though: Google’s many organizational branches never seem to talk to themselves.  We’ve seen this time and time again with products that have new features yet another product has a similar feature or doesn’t work with the new product.  Take Google Now for instance, which has been expanded to do a number of things but was never able to send a message via Hangouts, Google’s primary messaging app.

Saying ‘OK Google, send a message’ always resulted in sending an antiquated SMS message instead of asking if you wanted to send a message through Google’s Hangouts service.  Now it appears that Google is slowly rolling out an update to Google Now on the back-end that does exactly this.  All you need to do is prompt Google Now’s voice recognition with ‘OK Google’ or the touch of your finger and speak the words ‘send a Hangouts message.’  In practice this will bring up the dialog you see above and ask you who you want to send it to in addition to what the message body should be.  You should also be able to say the long string of ‘send a hangouts message to x’ followed by your message as you can with an SMS message.

In true Google fashion this doesn’t seem to be working with Android Wear yet, which is likely the biggest reason to even want to have this feature in the first place.  There’s supposed to be a big Android Wear update around the corner but there’s no telling if this will be included or if it’s just another thing Google has to roll out on the back-end.  It’s not working on all of my devices yet, so it’s definitely a staged rollout as Google usually does these things, so if it doesn’t work for you keep trying it throughout the day.  More than likely Google will have this rolled out to everyone by the end of the week.