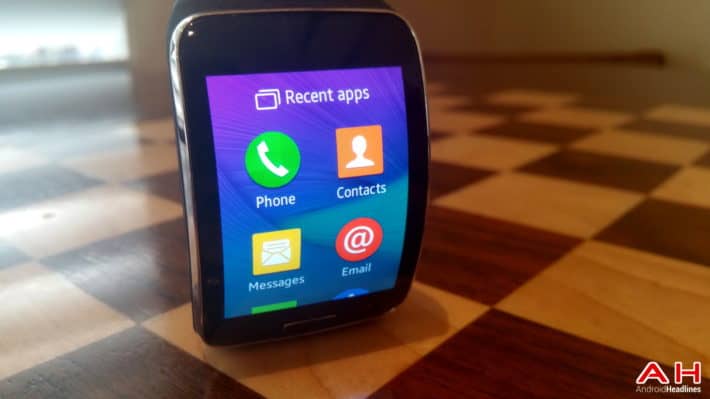 Samsung's Gear S was a pretty big deal when it came to wearable technology, because it was one of the first to utilize a curved display as well as one of the first that was able to function on its own. While it was best used in conjunction with a smartphone, it could also stand on its own two feet, so to speak. Compared to other watch designs however, Samsung's Gear line of smartwatches is missing one important member; a round smartwatch. We've been hearing reports of a round smartwatch coming from Samsung for some time, and we've even seen patents of its design. Now, it looks like we have a little more information about the upcoming 'Orbis' smartwatch.

There are now reports coming out of Korea that Samsung could utilize the Exynos 7420 CPU inside of 'Orbis'. While this is the same chip powering the new Galaxy S6, it's produced using a 14nm process, which results in a much smaller CPU which in turn uses much less power and therefore delivers much better battery life. In fact, Samsung is so confident in the battery life of the new Galaxy S6 that there's no longer a removable battery included. If Samsung were to use the Exynos 7420 it would probably be limited to either a dual-core or single-core mode, rather than the full octa-core mode.

As for when Samsung might feel ready to take wraps off their luxury smartwatch, it's now rumored that CTIA, held towards the end of Summer could be when Samsung will hold their launch event for their new watch. The Gear S was launched last year during IFA 2014 in Berlin, so a similar timeframe for this year's big smartwatch from Samsung would make some sense, especially considering that smartwatches will surely be big sellers this holiday season. Samsung now has a lot more competition in this space as well, with Pebble releasing the Pebble Time smartwatch, new Android Wear devices like the Watch Urbane and of course, the Apple Watch. Only time will tell if Samsung's latest smartwatch has what it takes to keep them on top of the smartwatch market.