Skip to content
Trusted By Millions
Independent, Expert Android News You Can Trust, Since 2010
Publishing More Android Than Anyone Else
11
Today
61
This Week
749
This Month
6472
This Year
116444
All Time Well, if that is the case then you might want to think about picking up a special edition of the Galaxy S6 Edge which is being released. This is the chef’s version and as such comes with the sharpest edge you will find on any Samsung smartphone. In fact, this is so edgy that Samsung have opted to announce the device as the world first smart knife instead of an actual smartphone. According to the information “Samsung is taking its commitment to culinary expertise and cutting-edge technology even further” and this is evident due to the inclusion of all the tech you would expect in the Galaxy S6 coupled with the ability for the device to be used as a chef’s knife.

The Galaxy BLADE Edge smart knife is designed with a diamond ethos and as such the knife is shaped to be almost diamond-like in its appearance. Not to mention, the handle is foldable, offering the ability to take your smart knife on the road with you. As well as the more standard S6 features you can expect, the BLADE Edge Chef’s Edition comes loaded with a number of sensors to help monitor your grip, chopping performance and general chef maneuvers to make sure you are utilizing the best of your chef skills. For those new to cutting and chopping, the BLADE Edge Chef’s Edition also comes equipped with Samsung’s Knox security suite ensuring “you’ll never cut yourself again“. This is utilized by the inbuilt fingerprint security which scans your fingerprints and retracts the blade when an imminent finger/knife collision are sensed. Not to mention the inbuilt antivirus solution will instantly make you aware of any germ threats noted on any of your cutting surfaces.

Of course, a Samsung device would not be a Samsung device without a range of accessories and as such Samsung have also announced ‘custom accessories’ to match the Chef’s Edition BLADE Edge as “coming soon”. Not to mention, you can also customize the handle by opting for the mammoth tusk version which is manufactured by 100% genuine mammoth tusk obtained beneath the North Sea. Some of the other ‘coming soon’ accessories include the Blade cover as well as wireless charging chopping block to make sure your device is always good-to-go and ready to chop and text. You will need to be quick to pick up your Galaxy BLADE Edge Chef’s Edition though, as it will only be available tomorrow, on April Fools Day. 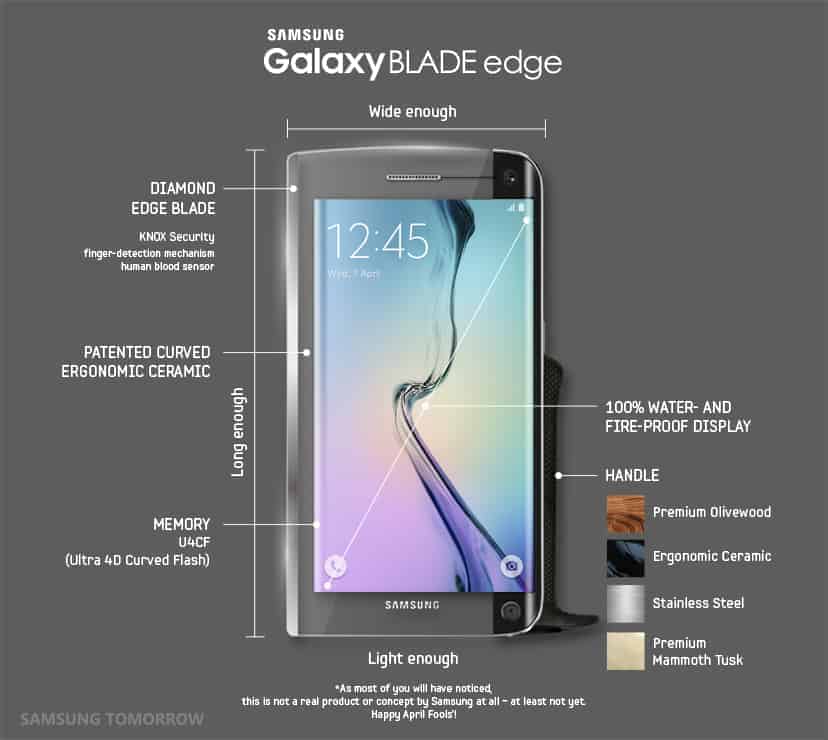