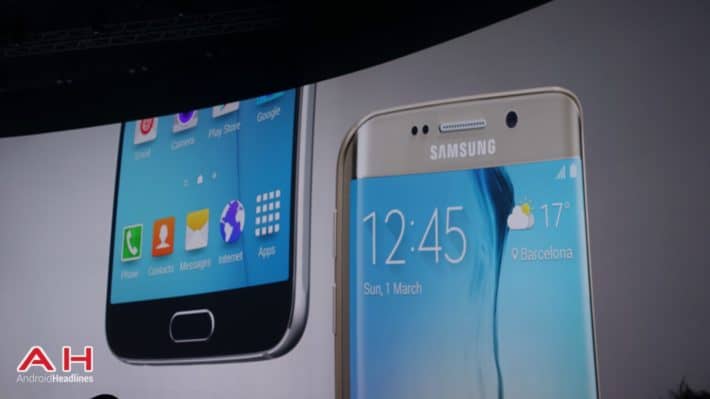 Samsung Galaxy S6 handset was one of the most expected devices of the year, and Samsung just unveiled it. We've seen a ton of rumors, leaks and reports in the last couple of months, and Samsung also joined the party with official teasers which they've been releasing intensively in the last couple of weeks. We've already covered the main announcement of Samsung's new Galaxy S6 flagship, and are now here to take a look at its specifications. As you might have expected, Samsung equipped this device with the latest and greatest hardware parts available, so let's check out what it has to offer.

The Galaxy S6 sports a 5.1-inch QuadHD (2560 x 1440, 577ppi) Super AMOLED display on the front, while it ships with 3GB of LPDDR4 RAM and multiple storage options, you can choose between 32GB, 64GB and 128GB models. The flash memory that Samsung used here are actually the company's newest UFS 2.0 units which allegedly work 2.7 times faster than the regular eMMC 5.0 units used in today's smartphones. Samsung's very own Exynos 7420 processor (quad-core 2.1GHz + quad-core 1.5GHz) is powering on this beast, a 64-bit octa-core processor built using 14nm process. This chip handles power consumption like a champ according to Samsung, it has 30-35% better battery life compared to 20nm chips that are currently out in the market. Mali T760 MP8 GPU ships with this SoC and is in charge of graphics processing. 2,550mAh battery (quick charging technology included) ships with the Galaxy S6 and should be enough to last you through the day in combination with Samsung's newest chip.

The device sports metal unibody construction this time around, compared to Galaxy S5's polycarbonate build. You don't get a removable battery option this time around, nor do you get the microSD slot. 16-megapixel camera is located on the back of this device (f/1.9 aperture, OIS included), and is flanked by a dual LED flash. On the front side of the device, you'll find a 5-megapixel snapper for your selfie and video call needs. This handset comes with Android 5.0.2 Lollipop pre-installed with Samsung's TouchWiz UI on top of it. The Samsung Galaxy S6 measures 143.4 x 70.5 x 6.8mm and weighs 138 grams.