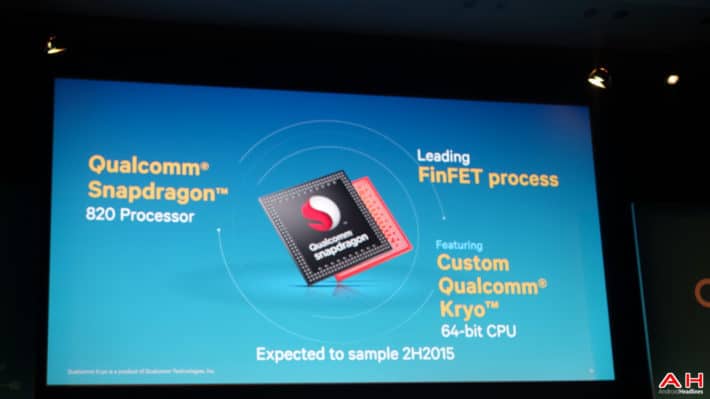 Qualcomm has held their press conference as part of the Mobile World Congress (MWC) in Barcelona today. The company has announced their Sense ID fingerprint scanning technology, along with the Zeroth Computing Platform. These two technologies are rather futuristic, and it will be interesting to see whether they will work as Qualcomm thinks they will. Either way, we've already covered the announcement of these two, so click here to check this out.

The company has also announced their upcoming Snapdragon 820 processor along with the aforementioned tech. The Snapdragon 820 will support Zeroth Computing Platform, but we won't be seeing it launch anytime soon. Qualcomm has said that they'll be shipping samples of the new processor to companies in the second half of this year, so who knows when they'll mass produce these chips, and when we'll start seeing first devices sporting this chip.

That being said, the Snapdragon 810 is an extremely powerful processor which is rather new, so there's no need for the Snapdragon 820 yet either way. The company has said that the new Snapdragon 820 will be a 64-bit chip based on Qualcomm's custom CPU core called Kryo, and that the whole chip will be build using the non-planar FinFET architecture. What does this mean? Well, in the end, it means that TSMC's 16nm or Samsung's 14nm factories are the two possible candidates who will manufacture these chips for Qualcomm.

Qualcomm didn't exactly release all that much details about the chip itself, which was to be expected considering they won't be launching it anytime soon. When we get ahold of some additional details, we'll let you know. Until then, check out the previously released article where we detail Qualcomm's new futuristic technologies which the company introduced. When you do that, let us know what you think about all this. Do you think that the new fingerprint scanning technology and Zeroth Computing Platform will be worthy additions to the smartphones of the future? Let us know what you think in the comments, we'd love to hear from you, as usual.