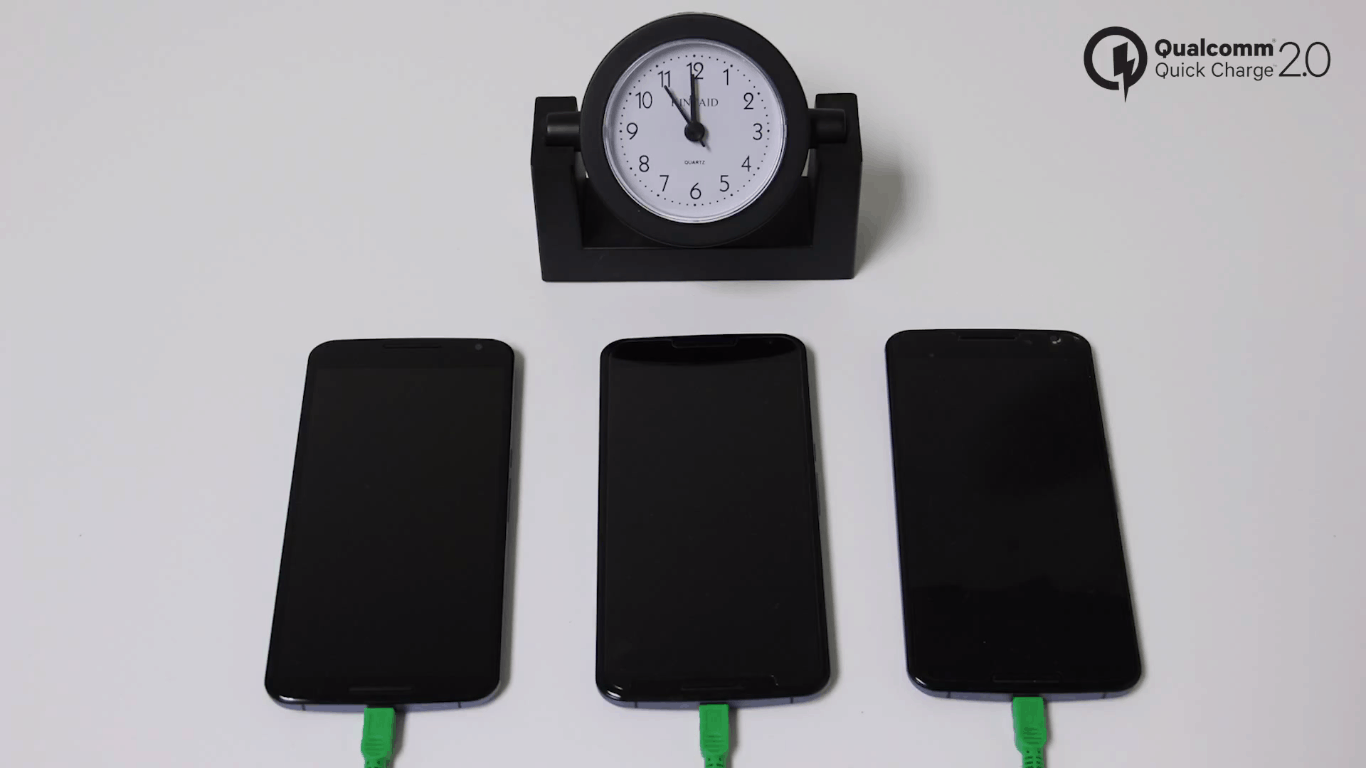 Battery life is one of the most common factors for many users in choosing a new smartphone, whether it’s all about long lasting battery life or the ability to receive a charge in a relatively short amount of time. While you can’t always be guaranteed that a bigger battery is going to solve all your battery life woes and concerns, you can attempt to attack this issue by choosing something that has Qualcomm’s Quick Charge 2.0 embedded in the CPU, allowing for hours of battery life in sometimes 30 minutes or less. In a recent report, Qualcomm highlights some of the differences between chargers that support Quick charge 2.0 and the use of conventional chargers that charge devices at a standard rate of time.

They detail these differences in a video which we have posted below, and it’s worth noting that all three devices being used are the exact same device, a Nexus 6 which comes equipped with a 3,220mAh battery inside, but also comes with Quick Charge 2.0. Each device uses a different charger rated for different amperage. The left most Nexus 6 is connected with a 5 volt charger that’s rated for pumping out 1 amp of current to the battery, the middle Nexus 6 is connected to a 5 volt charger that’s rated for pumping out 2 amps of current to the battery, and the last Nexus 6, the one on the right is connected to a charger that supports Qualcomm’s Quick Charge 2.0 standard.

To demonstrate the differences Qualcomm takes each phone up to 50% battery life so consumers can see just how long it takes for each charger, highlighting the benefits of using a charger with Quick Charge 2.0, provided your device supports this feature. This can come in especially handy if you’re in a hurry and don’t have a lot of time to waste sitting around while your phone charges up to at least 50%. After just 10 minutes, the Nexus 6 connected to the charger with Quick Charge 2.0 is up to 14% battery life, while the one in the middle is at 9%, and the one on the left is at merely 6%. After each 10 minute interval, the Nexus 6 connected to the Quick Charge 2.0 charger gets a larger and larger gap between its battery life percentage and the other two, gaining 50% battery life in just 40 minutes while the phone in the middle is at only 32%, and the Nexus 6 on the left with the 1 amp 5 volt charger is at 22%. If you’ve ever been in doubt about why a phone and a charger that support the Quick Charge 2.0 standard is something to seriously consider, perhaps this will clear things up.