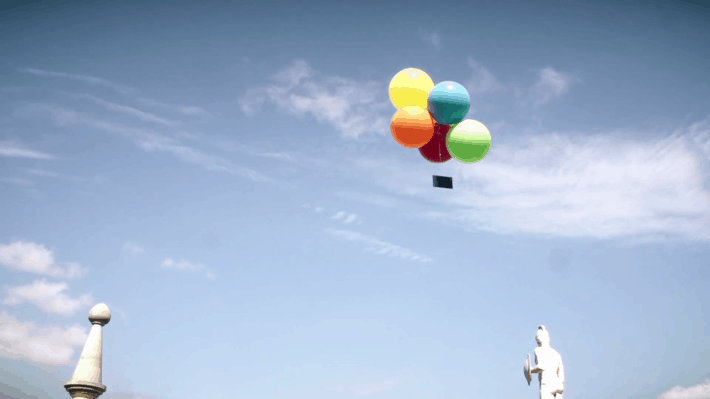 Sony didn't announce their latest smartphone in Barcelona like many were expecting them to, but they certainly weren't short on things to show off. There was the Xperia M4 Aqua, a fine example of what a more affordable smartphone could be, as well as the super-thin and super-light Xperia Z4 Tablet. Their latest and greatest tablet has been an unsung hit of the show this past week, and it's a welcome upgrade over the Xperia Z2 Tablet from this time last year. The 2K display and Snapdragon 810 make this one of the best specced tablets out there, and it also just happens to weigh just 389g and is just 6.1mm thick.

What do you do to prove your latest and greatest tablet is thin and light? Well naturally, you attach to some helium-filled balloons and set it loose in the skies above Barcelona. Naturally. This is a little bit of fun from Sony, rather than a scientific experiment, and as you'll see in the video below, Sony have a fair amount of helium balloons keeping their precious tablet afloat. Nevertheless, it's an interesting and fun way of showing off how portable and light your latest tablet is, even if it's not that difficult to lift roughly 400g of weight by way of helium balloons.

The Xperia Z4 Tablet is a seriously thin and light tablet, and in many ways it bests the iPad Air 2 which comes in at 6.1mm thick and weighs more at 437g. It'd seem that those looking for crazily thin gadgets have an Android option in town now. The Xperia Z4 Tablet will be on sale a little later this year, and there's going to be a keyboard case on offer from Sony themselves, too. A pretty complete package from Sony, it's nice to see Android tablets get a little shot in the arm as 2015 really starts to get moving with new products and announcements. Take a look at the video below and let us know what you think in the comments.