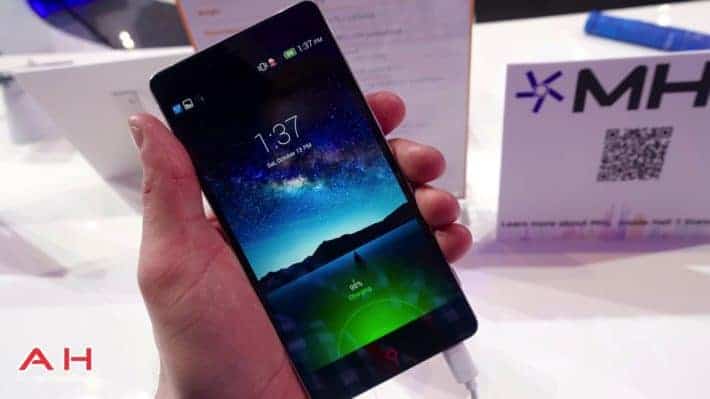 Like basically every other major smartphone OEM in the world, ZTE is also attending this year's Mobile World Congress in Barcelona. This China-based smartphone manufacturer has introduced their Grand S3 with the new EyePrint ID functionality at MWC, in case you're interested in checking that out, click here. We're not here to talk about the Grand S3 though, but about another ZTE-branded handset, their current flagship as the matter a fact, the Nubia Z7. This handset has launched in July last year and is still ZTE's prime device. We managed to get some hands-on time with this device at ZTE's booth at MWC, and shoot a couple of images to share with you, which are located in the gallery down below.

Let's check out this device's specifications real quick, the ZTE Nubia Z7 features a 5.5-inch Quad HD (2560 x 1440) display along with 3GB of RAM and 32GB of internal storage. This thing is powered by Qualcomm's Snapdragon 801 quad-core processor clocked at 2.5GHz along with an Adreno 330 GPU. 13-megapixel OIS camera (dual LED included) can be found on the back of this device, and a 5-megapixel snapper is available up front. Android 4.4.2 KitKat comes pre-installed on this handset with ZTE's Nubia UI on top of Google's operating system. The Nubia Z7 measures 153.2 x 75.7 x 8.9mm and ships with a 3,000mAh battery. This device is available in Black and White color options for a premium price (depending where you get it).

That's it, this is the Nubia Z7 in the flesh. It's successor, the Nubia Z9 (for some reason they seem to be ready to skip the Z8, at least according to reports) is expected to launch in a couple of months, though ZTE was rather quiet when it comes to that, they didn't share any info with us thus far. Make sure to leave a comment and say what you think about this handset.