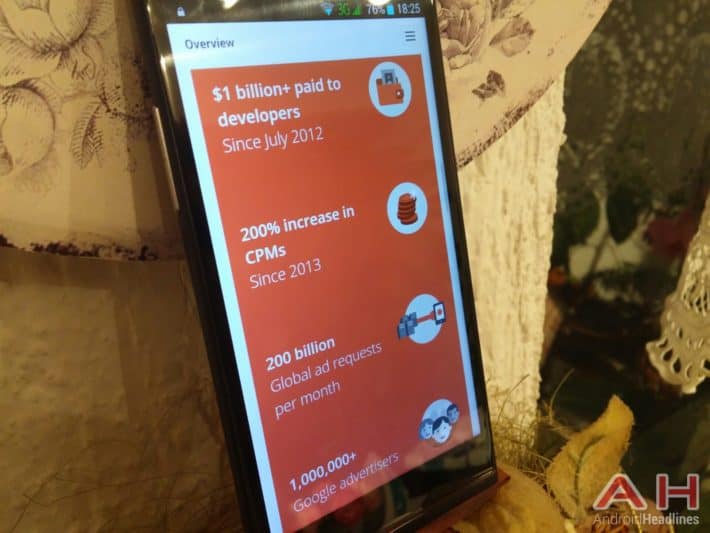 Advertising is a huge business, no doubt about it. Mobile advertising hasn't been doing all that well lately, the last couple of years in fact. As a direct consequence to low revenue in mobile advertising, many companies have been having issues keep turning profits. That being said, there's always a solution for such problems, or at least options. In this case, you can always try one of the many advertising networks that are currently available out there. Each of these networks offers a number of monetization models which can help mobile developers maximize their revenue. We're here to take a look at A bunch of advertising networks, many of which are rather unknown, but can be useful if you're a mobile developer. Anyhow, let's get started.

AdMob is an advertising platform that many of you probably know about. This is Google's advertising network and the most used one out there, this is also the first platform that you consider when you think of advertising, that's for sure. AdMob's SDK basically let you advertise across multiple mobile platforms, including the three biggest mobile platforms today: Android, iOS and Windows Phone. AdMob offers a huge variety of ad formats and this is a pretty straightforward platform at that. What's the problem with AdMob? Well, the revenue is very low and support is hard to reach unfortunately. Chartboost is a solid advertising network for displaying ads on your game titles, which usual advertising networks might not be so good at doing, mainly because they target general audiences. Chartboost is specializing in gaming ads and is targeting game developers. This platform also optimizes your eCPM, and you need only 5 lines of code in order to fire up Chartboost. The majority of the ads Chartboost deals with are ads for other games which are displayed while you're playing a certain game. Similar to what you see in regular apps actually, but game-orientated.

Millennial Media is one of those more popular advertising networks. If you're a developer, chances are you've heard of them already. This platform offers a number of advertising features which can help you promote your applications in various ways. Millennial Media also allows you to display advertisement from other advertising networks, and a nicely designed dashboard gives you a lot of data and access to all Millennial Media functions. Allocating traffic across networks by percentage, location and ad revenue based on eCPM is also available here. Tapjoy is an interesting advertising network. This service specializes in earning virtual currency by performing real-world actions basically. We all hate in-game purchases, right? Well, Tapjoy specializes in a somewhat different in-game purchase model. For example, if you download an advertised game, you'll get in-game currency in the game you're currently playing. At least you don't have to pay real money for it, right? 20,000+ games are supported by Tapjoy at the moment, and the service has over 77 million monthly active users.

Aditic is owned by Sofialys, which is a very well-known marketing and technology company. Aditic is a very straightforward and simple network which supports Android, iOS, Blackberry, Samsung Bada and even Java. This platform also offers a variety of ad formats in order to suit your needs as best possible and supports CPI model. The Admoda mobile advertising network is actually paying CPM, CPC and Flat Rates to its publisher, which is quite interesting. The company actually promises unbeaten fill rates and eCMPs, and offers a rather simple integration. The support is also rather good, so you shouldn't have any problems using Admoda. Keep in mind that this is an Android only advertising network though.Ä'

Flurry has a large app data set on consumer usage, they collected data from more than 700 million mobile smartphones and tablets. Flurry is very proud of this fact and thus rather confident that they can offer great analytics. This solution is also very easy to integrate, you can be up and running in no time, and it also supports a large variety of platforms (Android, iOS and Windows Phone). CPC (Pay Per Click) and CPM (Cost Per Impression) are offered here. Over 2 billion users use HUNT mobile ads network. HUNT offers SDK, reporting tools and reporting API in order to help you promote your content the best. HUNT is available for Android, iOS, Windows Phone and Blackberry, and it also rather painless to set up. This platform is mainly used in the Spanish-speaking markets (mainly Latin America), but it also has the presence in the U.S.

InMobi is an India-based company, but is used all over the world. They're used in 165 countries and have 578 million consumers. This company is constantly growing and keeps on offering more features for developers. They cover both apps and games, but are used more in the gaming department it seems. InMobi also offers a lightweight SDK, and supports Android, iOS and Windows Phone platforms. Kiip has a rather interesting business model, what the company calls the "rewarding" model. This gives you the opportunity to redeem real products, like snacks for example. Kiip offers nice API and SDK, which seem really professional. Check out the link above for more information about Kiip. CPI (Cost Per Impression) model is available here.

There are a number of other advertising platforms you can check out also, like Madvertise, MobFox, MobPartner, MoPub, Mojiva, PlayHaven, RevMob and Smaato. Each of these advertising networks has something unique about it. As you can see, there are a lot of options out in the market at the moment. If you'd like to get more information about each of these, you can visit their respective websites by clicking on either of the link above. Speaking of app advertisements, you can also check out our paid app review service.