The road to Samsung Galaxy S5 owners in Canada waiting for their Android 5.0 Lollipop update has not been a smooth ride by any stretch of the imagination.  It was early in March when we reported "Canadians that own a Samsung Galaxy S5 can jump for joy today," as they would receiving their long-awaited 5.0 Lollipop update.  Bell was the first one formally announcing the upgrade, but Rogers was close behind and others soon followed.  Things appeared to be going okay with the upgrade and most people seemed happy and things were working as they should.

A couple weeks later, it was discovered that Galaxy S5 owner's "jump for joy" was short lived as troubles began to creep up with the upgrade and the OTAs grounded to a screeching halt as Samsung tried to find out what was wrong.  Many that upgraded had no issues, but others experienced issues and some even figured out what was wrong as one person wrote, "Galaxy S5 user here, I am located in Canada and carrier locked to Rogers.  It would appear that either Samsung or Rogers had halted further push of the Android 5.0 Lollipop upgrade for the Samsung Galaxy S5 due to some minor bugs and issues."  They had upgraded 2 weeks prior and everything was going well until their Galaxy S5 went into the infamous "endless boot loop." But he narrowed it down to a data issue with one of his apps, as the device would not reboot in 'airplane mode.'

One of our sources was sent a Twitter that shows the receipt of the Lollipop update and it appears that Samsung jumped on the issue right away and has resumed the rollout to the Galaxy S5.  The report is that the rollout is across all carriers, but it is only Lollipop 5.0, not the newest 5.0.2, which is shipping on the new Samsung Galaxy S6 and Galaxy S6 Edge.  Samsung assures that the OTA you are receiving does have the 5.0 bug fixes in it and if you received the first update, then you will receive a smaller OTA with bug fixes found and corrected in the second rollout. 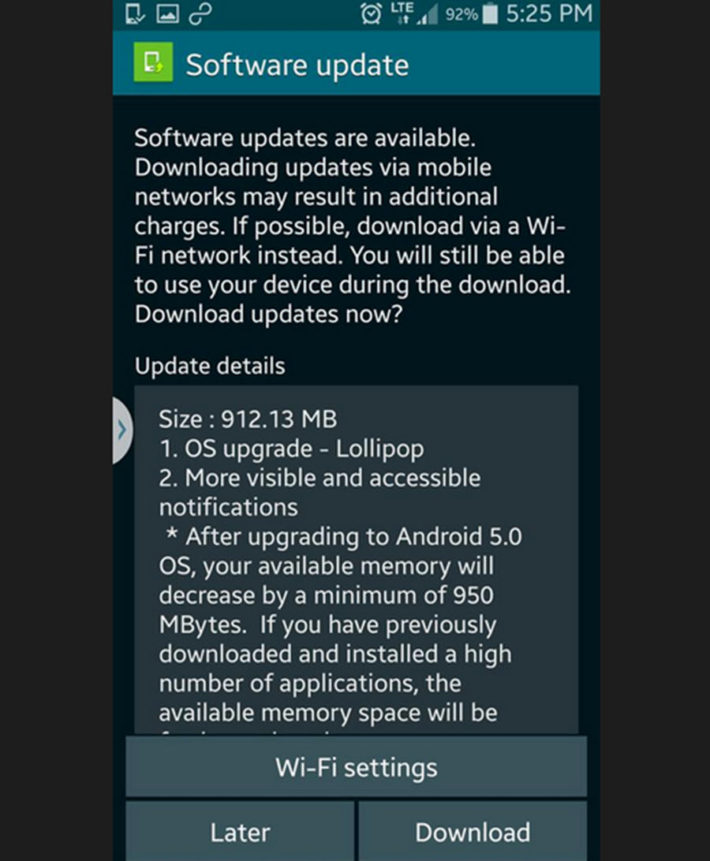