Skip to content
Trusted By Millions
Independent, Expert Android News You Can Trust, Since 2010
Publishing More Android Than Anyone Else
26
Today
122
This Week
253
This Month
7574
This Year
117529
All Time We’ve recently covered an impressive looking new smartphone from Chinese manufacturer, Lenovo, the K3 Note, just announced. The device is notable for having a low price, a little under $150, which is also combined with an impressive looking set of specifications. To recap, the device is based around a 5.5-inch, 1080p screen and an eight core, 64-bit MediaTek MT6752 processor clocked at up to 1.7 GHz. The processor is backed up by a respectable 2 GB of RAM and there’s 16 GB of internal memory plus a 3,000 mAh battery. As is common with many Chinese smartphones, the K3 Note is a dual-SIM device and features 4G LTE connectivity, a 13MP rear camera complete with a dual-LED flash, plus a 5MP front facing camera. These specifications look great, especially for the money.

It now appears that these numbers are backed up by a very respectable AnTuTu benchmark score of over 46,000 points. This puts the K3’s benchmark performance comparable with many of 2014’s flagship devices such as the HTC One M8, LG G3, OnePlus One and Samsung Galaxy S5. Admittedly, the K3’s MediaTek processor is a generation newer than most of the 2014 flagship model processors, being 64-bit capable, but it’s also important to point out that the MT6752’s 64-bit 1.7 GHz processor cores are the ARM Cortex-A53 unit, which are usually used as the high efficiency side of a big.LITTLE processor such as the Qualcomm Snapdragon 810 processor, if clocked at a lower speed.

It’s true that benchmarks have a tendency to flatter multi-core processors compared with their real world performance, because only a small number of applications are aware of more than one or two processor cores whereas a benchmark will load up all processor cores. It remains to be seen how the K3 Note performs in the hand rather than on a laboratory test bench. Nevertheless, that the K3 can show a similar benchmark score to devices that were three to five times as expensive is a credit to the advancements in mobile processor technology where in a relatively short space of time, a lower / mid range device is as responsive as a not-quite-replaced flagship device. 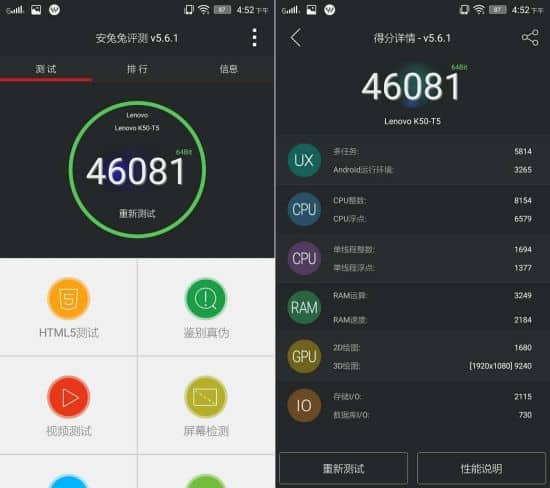