Huawei has been all over the news lately, not only did they announce their first Android Wear-powered smartwatch at MWC in Barcelona, but this company is also rumored as the possible manufacturer of the next Nexus device. Anyhow, Huawei is one of those smartphone manufacturers who also manufacture their own processors. Huawei’s SoCs aren’t nearly as well-known as Qualcomm’s, Samsung’s or MediaTek’s chips, but this China-based company is making really solid mobile SoCs.

That being said, some info surfaced regarding Huawei’s upcoming chips for 2015. Huwaei’s HiSilicon Kirin 930 octa-core chip is currently powering on the company’s flagships, and this leak brings us some info regarding the upcoming Kirin 940 and 950 chips. The Kirin 940 SoC is expected to arrive in Q3 2015, while the Kirin 950 will follow in the fourth quarter this year. Both of these chips are octa-core processors (quad-core Cortex A53 + quad-core Cortex A72), their clock rates are different though. Both of these chips come with support for a dual-channel LPDDR4 RAM (25.6GB/s) memory, will support 4K video encoding and will come with Tensicilica HiFi 4 DSP. As far as sensor hubs go, both of these chips will come with i7 co-processor (sensor hub + connectivity + security). The Kirin 940 will ship with ARM’s Mali T860 GPU, while the higher-end, Kirin 950, will come with ARM’s Mali T880 GPU. Dual-SIM category 7 LTE connectivity will be supported by the Kirin 940, while the Kirin 950 will come with support for dual-SIM cat.10 LTE connectivity.

There are plenty more information provided in the table down below, this is kind of an extensive leak, and the information seems quite credible. Huawei means business this year, the company is expected to launch a bunch of devices this year, starting with Huawei P8 which will arrive next month. We probably won’t see these two chips power on any of Huawei’s devices this year, but you can expect Kirin 940 and Kirin 950-powered Huawei-branded handset to launch in early 2015. That’s just a guess though, we’ll see. Let us know what are your thoughts here, are you looking forward to the announcement of any specific Huawei smartphone this year? 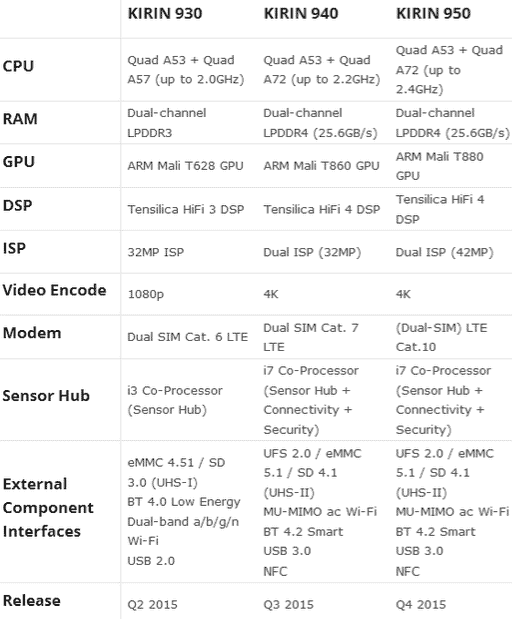