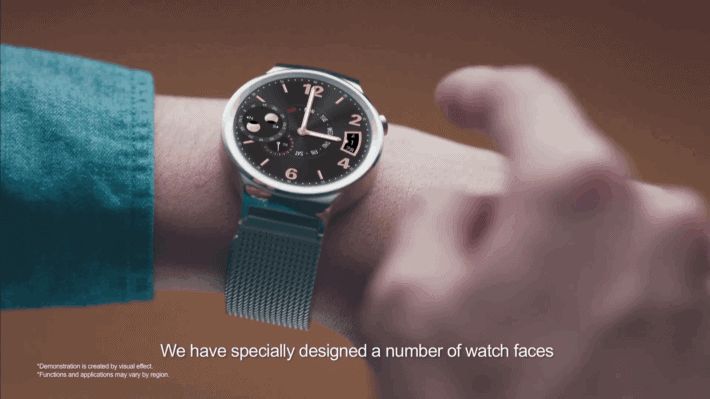 Yesterday during Huawei's Mobile World Congress 2015 Conference the Chinese powerhouse manufacturer unveiled their first Android Wear watch, and boy is it a beauty.  Motorola may have been the first to the round smartwatch game but it looks like Huawei may very well have the best design of all.  Featuring a similar round design to the Moto 360 or LG's G Watch R and Watch Urbane, the Huawei Watch is an elegant all-metal round Android Wear powered smartwatch with striking looks.  The Huawei Watch comes in silver, black and gold, all with unique bands that fit the color and style you're looking for.  The Huawei Watch also features an incredible looking 1.4-inch 400 x 400 pixel AMOLED display which registers in at 286 pixels per inch; higher than any other Android Wear watch on the market.

This clarity and screen quality is certainly one of the biggest selling features of the watch over others on the market, but what about the size of the battery on board?  Huawei is stating that it's only 300mAh, the same size as the Moto 360 and Samsung Gear Live, both watches that really only make it through one day at a time.  Compare this to the LG G Watch R and Watch Urbane's 410mAh battery and you might be a little concerned about what could be your new Android Wear smartwatch.  Let's consider this though, all Android Wear smartwatches feature the same internals except for the Moto 360.  Like the rest of the lineup the Huawei watch is powered by a 1.2GHz Qualcomm Snapdragon 400 APQ8026 chipsets, 512MB of RAM and 4GB of internal storage.  The Huawei Watch also features a heart rate monitor on the back, 6-axis motion sensor and a barometer.

With all these things running you might be concerned, but let's also consider the internals of the Moto 360.  Motorola is using an old Texas Instruments OMAP chipset, also found in the Galaxy Nexus, and has never been known for its great battery life as a chipset.  Considering that will get users through a day easily even with Moto Body constantly checking your vitals throughout the day via its biometric sensor there's little to worry about here.  Pair that with the AMOLED display that's going to have considerably better battery life than the LCD found on the Moto 360, even when Ambient or Always On display is on, and you've got a winning combination.