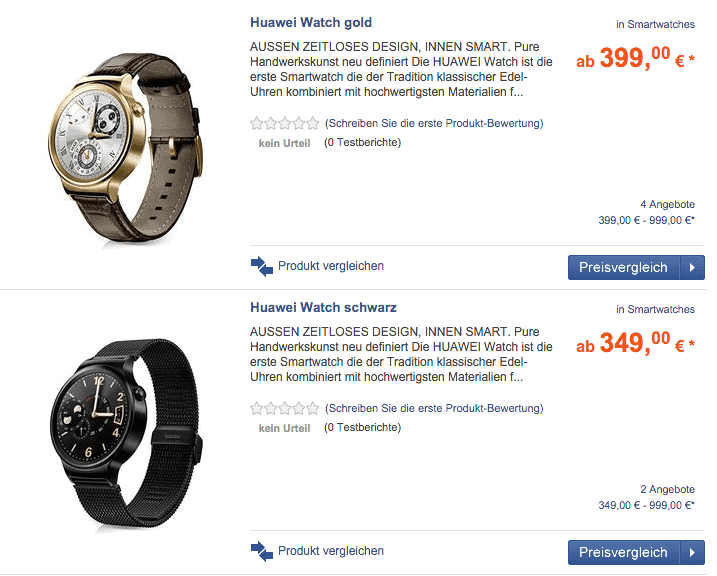 During Mobile World Congress in Barcelona, Huawei had one of the big surprises of the event, showing off their new Android Wear watch, something we thought couldn't come from someone like Huawei. The Android Wear watch was yet another circular affair, but it had a higher-resolution display than many others on the market right now and it's certainly a good-looking watch. It's been said that the Watch is the first of many devices to help make Huawei become a "more fashionable brand". There was one question hanging over everyone's head last week however, and that was just how much is the Huawei Watch going to cost?

We might have our answer to this question, if the prices put online by German retailer Billiger.de are to believed. The German retailer lists the Huawei Watch at â‚¬349 ($375 US) for the black metal with leather band, and â‚¬349 again for the silver with metal band. The prices jump to â‚¬399 ($430 US) for the gold version of Huawei's Watch. So, we now know that the Huawei Watch isn't going to come cheap, but then again it's still reasonably priced when you think about it. After all, the gold version of Huawei's Watch doesn't cost $10,000 and up.

It's important to remember that these are early prices, and they might not turn out to be final, as Huawei said it would be quite some time before the Watch even hits shelves. Also, conversions to the Euro aren't a reflection on how much it will cost when it hits the US or elsewhere, and shouldn't be trusted too much as the Euro is having some difficulties at the moment. Now, if these prices do turn out to be true, then it would make the Huawei Watch the most expensive Android Wear watch available. Whether or not it's worth that price remains to be seen, and hopefully we'll be able to put one through their paces soon enough.