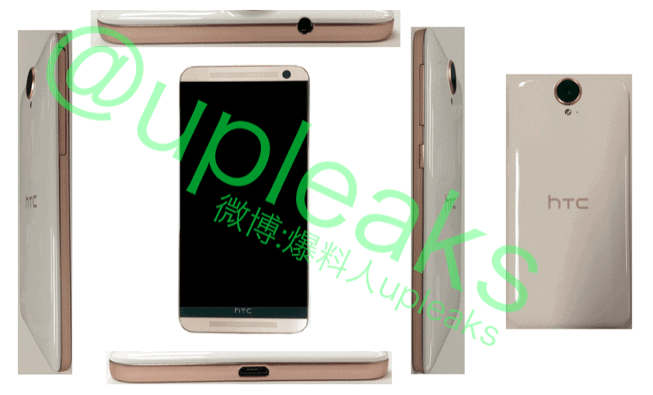 HTC One M9 is definitely the most talked about HTC-branded device at the moment. This is the company's new flagship which they announced earlier this month as part of the Mobile World Congress (MWC) in Barcelona. HTC One M9 is making its way to various countries around the world as we speak, and it's already available in the company's homeland, Taiwan. That being said, one of HTC's upcoming devices got certified by TENAA (China's equivalent to the FCC) earlier this month, the One E9 (A55) (HTC might name it One E9+ in the end). According to the listing, this will also be a high-end handset, though it will be powered by MediaTek's chip. We'll talk more about the specifications in a little bit.

We have some new info regarding the HTC One E9, its renders that is. As you can see in the provided image, this handset will be made out of plastic it seems, at least its back cover that is. BoomSound speakers will also be a part of the package here, and as you can see, the camera protrudes a bit on the back. Anyhow, according to TENAA listing, the One E9 will feature a 5.5-inch quadHD (2560 x 1440) display along with 3GB of RAM and 32GB of internal storage. MediaTek's MT6795 64-bit octa-core processor clocked at 2.2GHz will power on this handset and Android 5.0 Lollipop will ship with this device with HTC's Sense 7.0 UI on top of Google's operating system. 20-megapixel camera will be available on the back of this handset, and as far as the front-facing shooter goes, HTC will opt either for a 13-megapixel shooter, or a 4MP UltraPixel camera. 2,800mAh battery will also be a part of this package, and will keep this handset juiced up.

Judging by the specifications and the looks of the device, this will be HTC's MediaTek flagship, if we can call it that. This is a high-end devices no matter which way you look at it, though it seems like HTC opted for plastic materials here. The HTC One E9 is expected to cost around $480, and the reports say that it will launch at the end of this month in China.