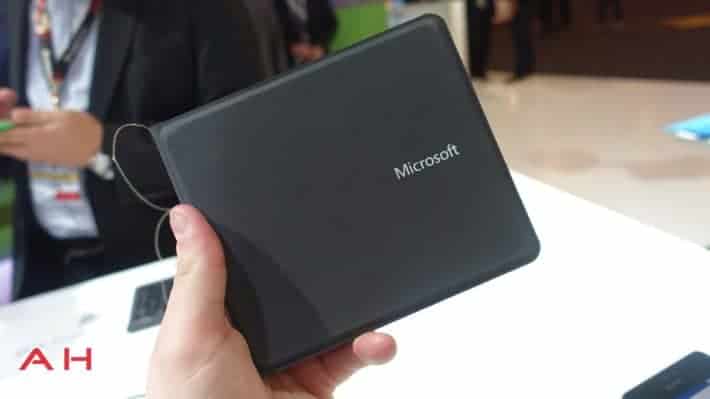 The above shot pretty much sums up what Microsoft were going for when they designed their latest mobile keyboard. Microsoft sure seems to have an obsession with keyboards as of late, and it's understandable why. After all, Microsoft has been producing PC hardware for years now, and there's a cult following around some of Microsoft's older mice and keyboards. The keyboard accessory for their Surface line of tablets is arguably one of the best out there for tablets and over the past year they've released Bluetooth keyboards that don't care which major mobile operating system you're using. This latest keyboard is sort of like putting a TypeCover in your pocket and using it with whatever you want.

The Universal Folding Keyboard is exactly what you think it is, it's a folding keyboard that works with everything you own – within reason – and it's held together by two magnets that keep it closed. There's a split down the middle which will take a little getting used to, but after a little while it'll feel like many other laptop keyboards in use. This is a nifty idea for a couple of reasons, not least the fact that you can take this with you and set it up on whichever device you want, but also because it's so simple to use. There's one microUSB port on the side to charge things up, and that's about it. You just connect it to your device, and you're good to go.

Bluetooth keyboards are two-a-penny these days and come in all sorts of designs, but none of them are as portable as this offering from Microsoft. A lot of keyboards offer a built-in stand for your tablet as well, but they often take up more space in our bags than we'd like. We don't know how long Microsoft's keyboard will last on a single charge, but we can't imagine such a small device is going to take long to recharge. Take a look at the gallery below and let us know what you think.