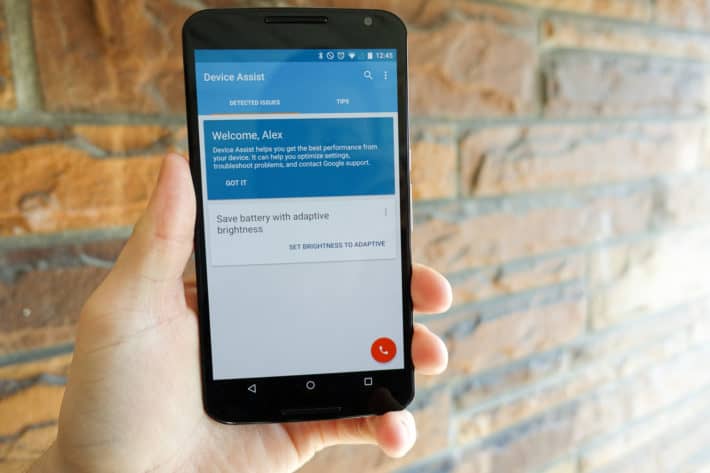 Many days we use our smartphones without issue, zipping around on the internet and using apps with the greatest of ease.  Some days though you might find yourself frustrated with your device, wondering why it's performing so slow, why the battery is draining so quickly, or why it's just "being stupid" in general.  This is when a helping hand could really relieve some of the stress in your day, and that's what Google has planned with its Device Assist app for Android 5 Lollipop.  Device Assist has been available for Nexus, Google Play edition and Android One devices running Android 5 Lollipop since early December and has likely helped out plenty of people since its release.  The biggest problem outside of requiring Lollipop to use it is that its only been available in a few countries from the outset, but today Google is changing that.

With these additions the number of countries Google gives live support to has risen to eight in total.  If you live in Canada, France, Germany, Italy, Japan, Spain, United Kingdom or the United States you'll be able to access the live support section of the app.  In addition to this you'll of course be able to use the app in the normal way, which means getting proactive suggestions with issues such as GPS, general connectivity, battery and more.  Among the more helpful suggestions the app can put out there you'll always find things that are a little more obvious than others.  There's even the often used turning it off and on again that can solve a lot of issues, but you might already be doing that on a normal basis in order to mitigate issues that appear every so often.

Google has been launching more and more of these types of apps to help with user experience, and it's something the company has needed to do for a while.  Google's Android is far from being the difficult to use experience it once was but there's always a reason customers might need help every so often.  Amazon has been on the pinnacle of this sort of support with their Mayday feature on Kindle Fire tablets for a while now, but it seems like Google may be playing catch up with Device Assist as it continues to expand its reach worldwide.