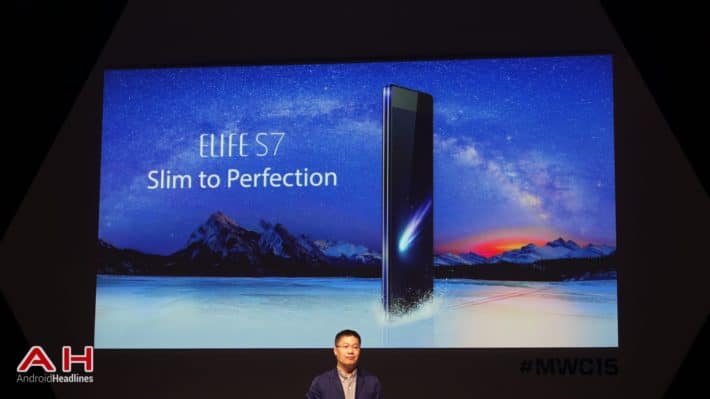 Today at Mobile World Congress 2015 Gionee announced their latest flagship, the Elife S7.  Folowing in the footsteps of previous devices the Elife S7 is among the thinnest smartphones on the market, with essentially only Gionee's other phone the S5.1 being thinner.  At 5.5mm thin this is 1.3mm thinner than even the Samsung Galaxy S6 Edge which was announced yesterday, which shows the level of engineering Gionee is working with.  The body of the phone uses an aluminum magnesium allow unibody to create a truly light and high quality frame, and the Gorilla Glass 3 front and back ensures that scratches and cracks are kept to a minimum to matter how rough you are with the device.

Inside of the phone you'll find MediaTek's brand new 64-bit 1.7GHz octa-core processor, as well as 2GB of RAM and 16GB of internal storage space.  The 5.2-inch screen pushes a full HD 1080p image, and dual-SIM capability ensures that users in countries with difficult coverage maps can get what they need from regional carriers.  What's even more incredible than the ultra thin frame on the Gionee Elife S7 is the massive battery Gionee has stuck inside of it.  At 2,750mAh this battery is 200 mAh higher capacity than Samsung's Galaxy S6 battery all while being 1.3mm thinner.  Gionee has been working on their photography game too, packing in a 13-megapixel shooter with brand new imaging software that it's been touting as the best they've ever made.  Among the achievements is a burst most that takes 6 photos in 1 second.  On the front of the phone you'll find a nice high-res selfie shooter at 8MP.

On the software front Gionee is packing a brand new version of it's skin, Amigo 3.0, on top of Android 5.0 Lollipop so users can experience the latest and greatest of Google's mobile OS.  Gionee is expected to launch the Elife S7 in India in April for RS 29,999 (about $484 or â‚¬434).  At Gionee's event they talked about how they've sold over 4+ million devices in India already and are looking forward to more successful phones in the country in the future.  Gionee is aiming to reach the top 5 mobile OEMs in India by the end of the year, and with more devices like this it may very well hit that mark or exceed it.