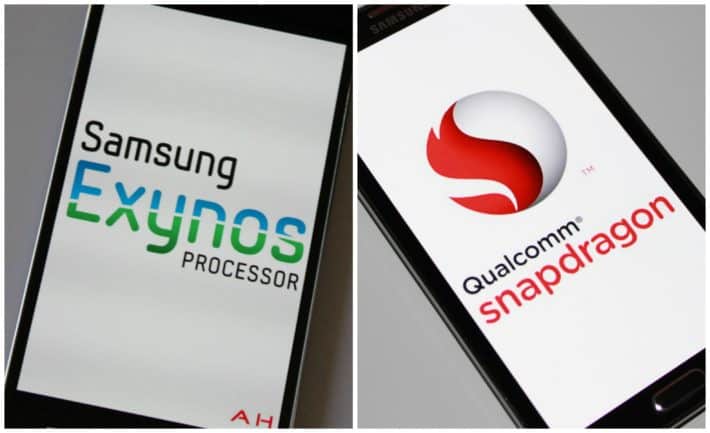 A little over a month ago rumors started flying that Samsung had ditched Qualcomm's newest processor, the Snapdragon 810, with their own brand-new Exynos 7420 processor.  After weeks of speculation and even an earnings call from Qualcomm that said they lost a major hardware partner in an upcoming device, Samsung did indeed announce on Sunday that it will be using the Exynos 7420 processor in a Galaxy S6 and Galaxy S6 Edge models.  This marks a change for the company as they've normally used Qualcomm's chips in LTE markets and their own Exynos chips in non-LTE markets, and while this isn't the first time they've used Exynos for the worldwide launch of a product it is their biggest launch with Exynos.

Besides reducing dependence on outside suppliers for components in their newest products it looks like Samsung chose to go Exynos for a number of reasons this time around.  First off it's built on a brand new 14nm FinFET manufacturing process, giving Samsung more room to pack the processor full of semiconductors and other components that increase the overall computational speed of the processor.  Then there's also the heat argument from those in the camp saying that the Snapdragon 810 was overheating for a long time.  With all this knowledge in tow how does Samsung's latest actually stack up against the Snapdragon 810, which is inside the HTC One M9?  How about Apple's latest processor inside the iPhone 6 and 6 Plus, the Apple A8?  Let's take a look at the Geekbench scores for an idea1.

As you can see from the benchmark results Apple and Nvidia's individual cores are stronger than what we're getting from Qualcomm and Samsung, but single core results are only so useful as many applications now support all cores.  With that in mind moving to any multi-core test shows that Qualcomm and Samsung's cores combined make a much faster processor.  Samsung's Exynos 7420 in particular absolutely trounces the competition in every single multi-core computing benchmark except for the memory test.  Interestingly enough both the Snapdragon 810 and Exynos 7420 score much lower than the Snapdragon 801, 801 and Nvidia Tegra K1 here, showing that there might be some sort of issue with the big.Little architecture used in both of these chips when concerning memory latency.  Lastly we look at gaming where the Tegra takes the cake every time, with the Snapdragon 810 and Exynos 7420 switching places depending on the test.  At the end of the day these are both incredibly powerful chips that will take anything you give them, chew it and spit it out like nobody's business, which means benchmarks aren't necessarily the be-all-end-all solution, rather just an idea of what to expect from real-world performance.  Check out the source link below for all the benchmark results.