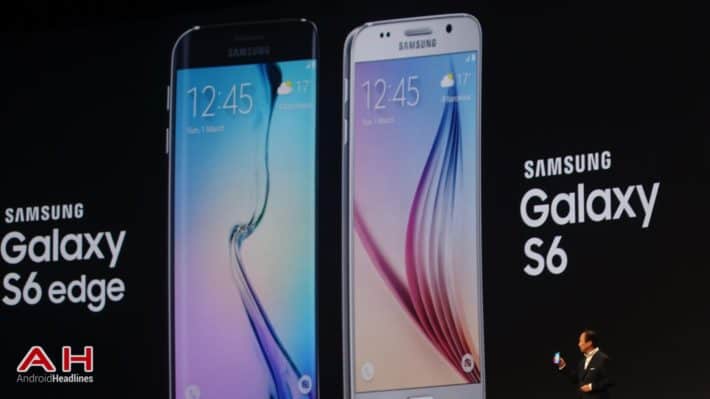 Second is the screen, with a huge amount of pixels.  The Galaxy S5 featured a nicely-sized 5.1-inch 1080p display, which has been upgraded to a QuadHD, 2560 by 1440 pixel, display on the Galaxy S6 and Galaxy S6 Edge.  The screen, which still uses the AMOLED technology, packs an impressive 577 pixels per inch, on the Galaxy S6 5.1-inch display. Samsung has long been adding features to Touchwiz, but this year, they have finally slimmed it down and off.  Touchwiz is now more slim, less power-hungry, and allows the newly-implemented Exynos 7420 octa-core 64-bit processor backed by a beefy 3 gigabytes of RAM.  The phone features the fastest internal storage hardware for the fastest access to your files.

Something the people have been complaining about for a while is internal storage constraints.  Since The Galaxy S5 had only 16 gigabytes of storage, the Micro SD card slot was oft-used by fans with lots of data, but now that the Galaxy S6 has no SD card slot or removable back, they've followed a new road.  The road took them to the memory expansion side of smartphones, giving customers the option to get a 32 gigabyte phone, as in the days of the Galaxy S III in 2012, but also a 64 and even a 128 gigabyte model, to store all your photos, songs, and movies. The camera, one of the main points of buying a smartphone nowadays, is also an improvement over the Galaxy S5 from last spring.  The Galaxy S5 featured a 16 megapixel camera with software-base image stabilization, but the Galaxy S6 obviously one-ups last year's model with a hardware-based optically stabilized image sensor, still packing 16 megapixels.  It features a new front-facing camera, now sized at 5 instead of 2 megapixels, both having real-time HDR preview of photos and f1.9 aperture glass so more light can come in and it can fire off shots faster than last year.

To wrap up the Galaxy S6 improvement over the Galaxy S5, is the battery.  The Galaxy S5 had a removable back cover and battery, as well as a water-resistant seal on it.  The Galaxy S6 and Galaxy S6 Edge feature a non-removable glass back cover, with a sealed-in battery that is, according to Samsung, supposed to be the best ever.  And, given that it integrates NFC, Samsung Pay, and wireless charging, as well as Samsung's own rapid-charge tech which can offer 4 hours of battery life in only 10 minutes of charging the device, it seems to be pretty accurate a description of the battery.  With the Galaxy S6 and Galaxy S6 Edge, users should expect better battery life, as well as better charging times and convenience thanks to Samsung's inclusion of wireless charging, which is compatible with most standard wireless chargers today.

The Galaxy S6 and Galaxy S6 Edge have become known, and with all they are in mind, do you think they'll succeed more than the Galaxy S5 did?  Did Samsung make bold moves in the correct direction, or did they play safe again and manipulate existing designs for smartphones?  Do you think you'll be picking up the Galaxy S6 or Galaxy S6 Edge, and if not which device will garner your smartphone-buying dollar in the next 12 months?  Let us know down below.