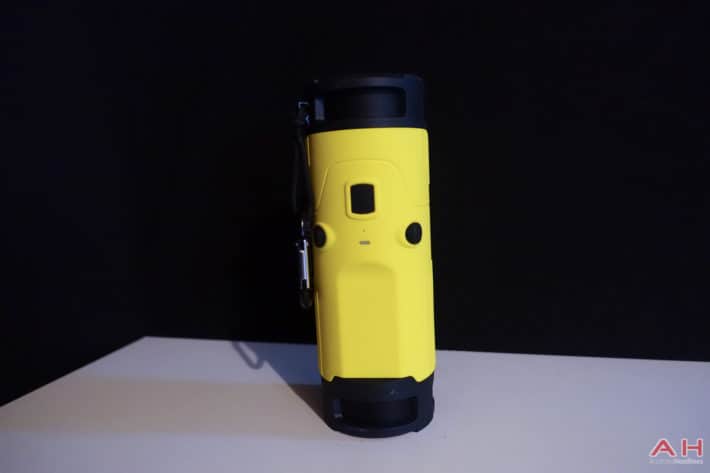 Scosche's BoomBOTTLE is a pretty interesting Bluetooth speaker. It's basically set up like a water bottle and meant to bring you about 10 hours of amazing sounding audio. It also includes a nice heavy-duty carabiner  so you can attach it to other items and places. It's about a $100, so let's see how well it's made, and if it's worth your money.

The BoomBOTTLE is water-resistant and rated at IP64. So it can withstand the rain and even the beach. The design of the BoomBOTTLE allows it to fit into cup holders in your car and even the bottle cage of a bike, which is where this would likely get the most usage. Scosche also has a nice volume rocker on the side, as well as a power button. On either end you have your speakers. So that you'll get great sound out of either end of the speaker. Additionally, we have 40mm drivers in either end of the speaker which bring you some pretty amazing music. There is a microphone inside so you are able to take phone calls from the speakers, as most Bluetooth speakers do these days.

My time with the Scosche BoomBOTTLE was quite good. I didn't have any issues getting devices paired with the speaker. For those wondering, I paired it with the Xperia Z3, Google Nexus 6 and the Moto E 4G LTE. All three worked perfectly with the BoomBOTTLE. I also found that the generous 10 hours of battery life was wrong. As I was able to get at least 12 hours on most charges. So it'll last you all day long. It also performed well in the rain, which we surprisingly got some here recently. All in all, I was quite happy with the Scosche BoomBOTTLE speaker, and I think all of you would be as well. Obviously it's designed for those who ride bikes, but it's also great for sitting on your desk, or in your cupholder in your car, and fits perfectly.

The Scosche BoomBOTTLE is available on Amazon at varying prices, depending on the color you choose. But it's around $100, for those interested in picking one up.