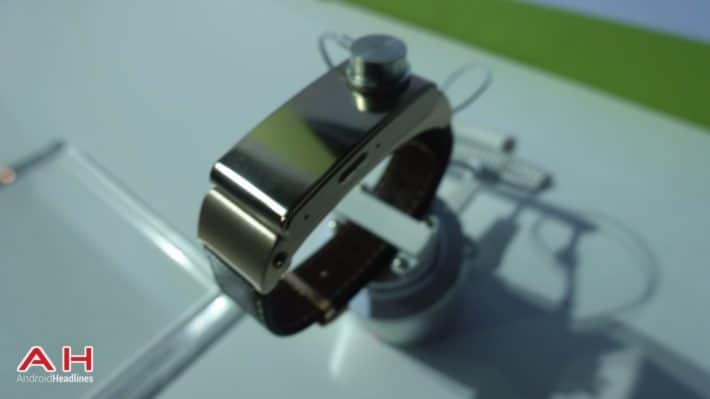 Mobile World Congress has officially opened its doors and we're able to mooch around the different booths and take a look at all the new gadgets that are on display throughout the Gran Fira here at Barcelona. We recently took a look at Huawei's new MediaPad X2 tablet-come-smartphone, and now we're taking a look at the two new fitness trackers that Huawei announced. The TalkBand N1 and TalkBand B2 are more like lifestyle products to extend the functionality of your smartphone, and in the case of the TalkBand B2, offer you a classy-looking fitness tracker.

We covered the news of these yesterday, along with lots of other news from MWC '15. We'll start talking about the TalkBand N1, which has to be one of the best products for those that listen to music while working out. They're essentially a pair of Bluetooth earbuds with 4GB of internal storage for workout playlists and such. They're IP54 water and dust resistant and you can easily hang them around your neck when you're not listening to anything thanks to the magnets that turn them into a sort of necklace. This is an interesting product, especially for those that enjoy listening to much when they're out for a run or something like that. These also feature a microphone for taking calls, and they weigh just 18g! Take a look in the gallery below.

On to the more advanced TalkBand B2, and as we said yesterday, this is a do-it-all fitness tracker. It can be worn on your wrist, and the display can show your goals, your step count or which activity you're currently doing; that sort of thing and it also doubles as a watch, too. The neat part is that you can unhook this unit from the strap and then use it as a Bluetooth earpiece, which is really quite nifty. The TalkBand B2 is an upgrade from the original B1 that launched last year, and they've definitely made some classy changes to their fitness tracker and you can take a quick, closer look in the gallery below.