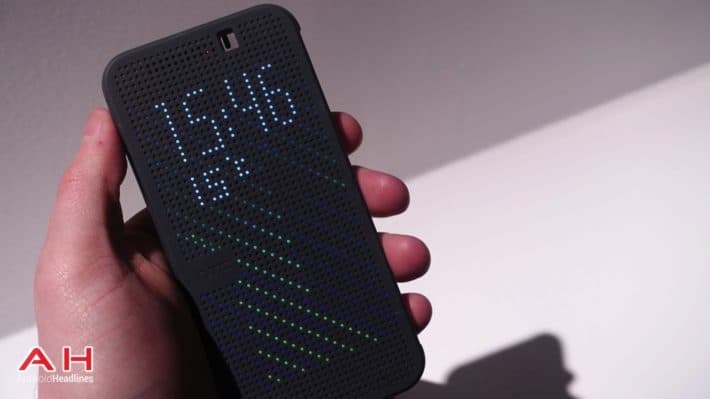 It wasn't long ago that HTC announced the HTC One M9 during Mobile World Congress in Barcelona, but we're already seeing it work its way to stores. Clearly, HTC is keen to get their new smartphone off the ground before Samsung does. In order to do that, it looks like HTC has been working on getting the One M9 into retail channels for some time now, as this sure looks like a coordinated launch effort by HTC. Carphone Warehouse, the UK's largest smartphone retailer was one of the first to announce that they would be carrying the phone and now, they've gone ahead and opened up pre-orders.

The UK retailer has the One M9 up for pre-order in either grey or silver and those that do so will get a free HTC Dot View case. This year, the Dot View case is even more advanced than previous generations and it's able to display more information than last year's model. Plans from Carphone Warehouse start from £43.50 with no upfront cost on Vodafone which gets you unlimited talk and texts, but just 4GB of data. O2 and EE start at similar prices a month, but they're asking for £59.99 upfront for the phone. No matter which plan you choose from Carphone Warehouse however, you're assured a free Dot View case, which is a handy accessory to have, that's for sure.

We've covered EE and Vodafone's pre-orders for the HTC One M9 earlier this week, and the general consensus is that this isn't what you'd call an "affordable" smartphone. Still, the One M9 is a lot of smartphone and while it's very similar to last year's model, HTC have made a number of improvements including the upgrade to Qualcomm's Snapdragon 810 octa-core CPU and further improvements to the camera and of course, those BoomSound speakers. That leaves just Three in the UK to announce pricing, but we're sure they'll be along soon enough. In the meantime, there are enough offers out there to consider, so let us know if the One M9 is for you or is it just too expensive?