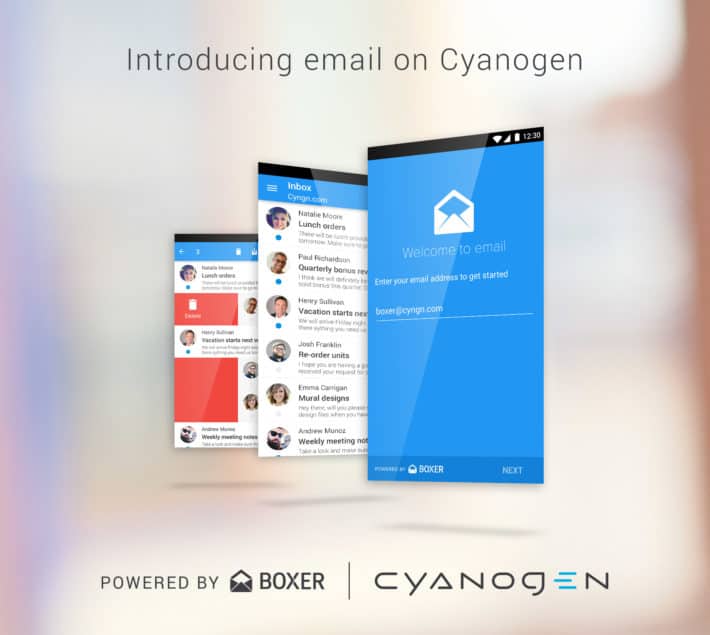 Today, Boxer along with Cyanogen, have announced a new partnership between the two companies to bring Cyanogen Mail to the OnePlus One, Micromax Yureka and the upcoming Alcatel OneTouch Hero 2+. The app will be pre-installed on future Cyanogen-powered smartphones. It's important that we note that this only applies to Cyanogen OS and not CyanogenMod. CyanogenMod is still open-sourced and has virtually nothing pre-installed.

"We're truly excited to be partnering with a company that shares so many of Boxer's core values. Mobile devices have become so prevalent in our lives, but with no two people sharing the same work habits, we believe it is critical that users are offered the option to customize. Phones come in all shapes, sizes, and even colors. With all the device options available in the market today, it is clear that one size does not fit all. We believe the email experience should be no different. Cyanogen shares our vision for customization and user choice. We couldn't ask for a better partner." Stated Andrew Eye, CEO and Founder of Boxer.

The Cyanogen Email app, is actually just the Boxer app, but with Material Design. Which is currently only available on Cyanogen-powered devices. Users will get all of the features of Boxer Pro, which the biggest feature in Boxer Pro is the ability to add in multiple accounts. So you've got Gmail, Microsoft Exchange, and just about every other email provider available. This is more important for those that use Microsoft Exchange. As most of you know, the AOSP email app isn't all that great. While Google's Inbox does support Exchange, you do still need an invite. Boxer takes care of all that, and you don't need an invite to use it. Just need an invite to buy a OnePlus One unless it's Tuesday.

Some of the other features that come with Cyanogen Email include the ability to customize swipe actions. So Cyanogen users can customize their left and right swipe actions, notification sounds, account colors for LED notifications and even create custom inbox folders. Cyanogen Email also brings integrated task management. So users can create a task, set a due date, priority level and even set an assignee straight from the inbox. Cyanogen Email users will also be able to integrate popular productivity apps which include Evernote, Box, Dropbox, Google Drive and others. All integrated into their inbox.

The update to Cyanogen Email should be rolling out to the OnePlus One and the Micromax Yureka in the next few weeks. We'll be sure to keep you updated as to when that happens.