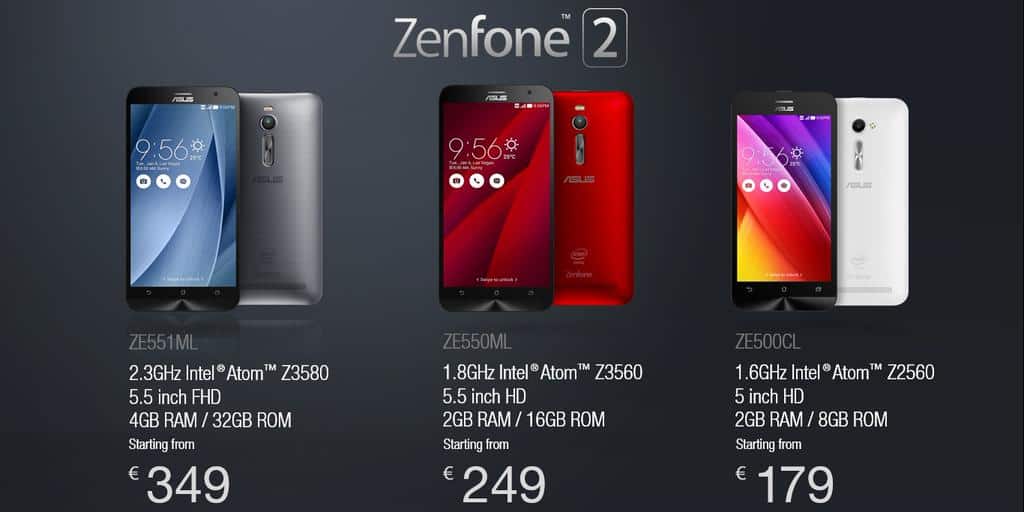 When ASUS launched the ZenFone 2 back in January during CES, many were amazed that the company could pack so much technology into such a small price tag. That's really what the ZenFone 2 line has already become known for; its excellent value for money. The original ZenFone line of devices were affordable, and featured fairly decent specs, but they were no match for the Moto G from Motorola. This year however, ASUS have a trio of devices that will appeal to different users and offer more powerful specifications than similarly priced devices.

Now, the ZenFone 2 is heading to Europe before hitting India, starting with France. ASUS is to sell the device in three different variations, including the new 5-inch model that wasn't announced back at CES in January. This 5-inch version, the ZE500CL starts at â‚¬179 ($190) and features a 1.6 Ghz Intel Atom Z2560, 2GB of RAM and 8GB of expandable storage. Moving up to the main even, the â‚¬249 ($270) ZE550ML features the newer, 1.8 Ghz Intel Atom Z3560, a 5.5-inch 720p display, 2GB of RAM and 16GB of expandable storage. During CES, we were shocked to see ASUS announce a budget-minded device with as much s 4GB of RAM. Of course, this version won't be quite as affordable, but at â‚¬349 (¢380) with a 5.5-inch Full HD display, 4GB of RAM and 32GB of expandable storage, this is not a bad price at all for an unlocked device. Plus, each ZenFone 2 device is running Android 5.0 Lollipop and ASUS' ZenUI on top is actually useful compared to other customization efforts out there.

Those interested can purchase the ZenFone 2 from Darty, CDiscount, the ASUS Shop and Auchan. To celebrate the launch of the ZenFone 2 line in France, ASUS is offering a limited discount on the 4GB ZE551ML for just â‚¬299 for a limited time. No matter how you look at the pricing of the ZenFone 2, this is a competitively priced smartphone, and one that many will struggle to find a matter deal on. Those in the US can already pre-order the device from Amazon, while we've reached out to ASUS UK to find out if they'll make it across the channel.