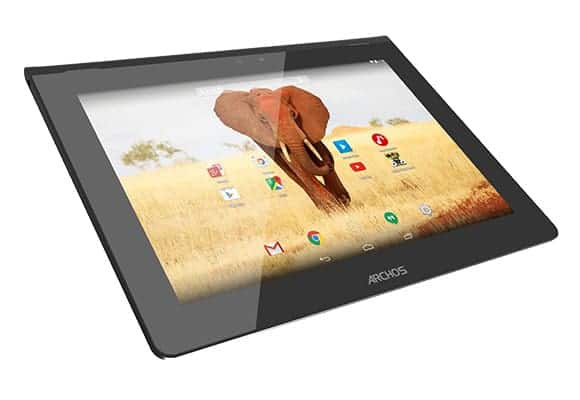 French manufacturer Archos have released a new range of tablets, the Magnus, using an innovative, memory-boosting technology called "Fusion Storage," which combines a MicroSD card with internal memory to form a single storage block. The range of tables include capacities up to 256 GB and three disparate models, the 101 Magnus, 101 Magnus+ and 94 Magnus. One potential issue that Archos hasn't addressed is what happens to the tablet if a MicroSD card is suddenly removed. Customers will be able to disable Fusion Storage function from with the device settings menu. Each of the new tablets will launch in April and, being an Archos, they benefit from their Media Center application.

The cheapest model in the range is the 101 Magnus, which is based around a 1.3 GHz, quad core MediaTek processor. It's backed up by 1 GB of RAM and has 64 GB of internal storage plus that MicroSD memory card. There's a 2MP rear camera, a VGA or 0.3MP front camera, WiFi and Bluetooth. There's a low resolution, 1,024 by 600 pixel, 10.1-inch display. Power comes from a 4,000 mAh internal battery and the device will cost $180, running Android 4.4 Kit Kat.

The next two models also run Android 4.4 KitKat and will both cost $350. Archos have given the 101 Magnus+ a higher performance Rockchip quad core 1.8 GHz processor, backed up by 2 GB of RAM. There's 128 GB of storage, a 5MP rear camera, 2MP front camera and a 1,920 by 1,200 pixel, 10.1-inch display. The battery size is also given a substantial bump to 7,000 mAh capacity. The highest capacity Magnus tablet is the 94 Magnus, which as you might expect from the name, uses a 9.4-inch display. This panel is of 1,280 by 800 pixel resolution. It has the same quad core 1.8 GHz processor as found in the 101 Magnus+ but it's equipped with less RAM (1.5 GB) but more internal storage, at 256 Gb of internal storage. There's a 5MP rear camera and a 0.3MP VGA front facing camera. The battery capacity is at 6,500 mAh. Both the 101 Magnus+ and 94 Magnus+ add stereo front facing speakers to the line up. What do you think to these tablets? There's a clear difference between the 101 Magnus and the 94 Magnus, 101 Magnus+ models both in terms of specification and price. Of the two higher end models, what do you think to the possibility of a tablet with 256 GB of storage plus a 128 GB MicroSD card? Let us know in the comments below.