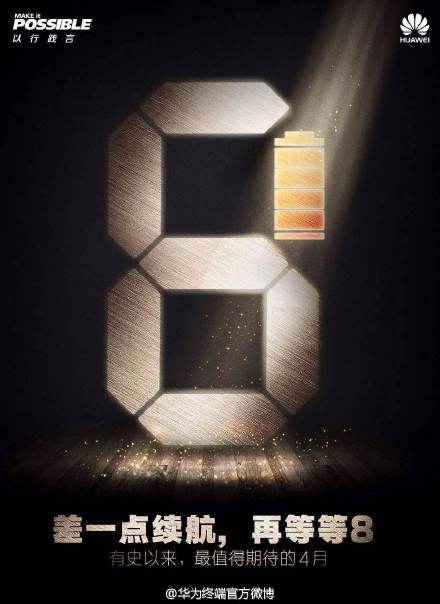 We've been hearing about Huawei P8 for quite some time now. This handset will be the company's next flagship, and Huawei themselves confirmed that the device will launch in April in the company's recent teaser. The company has released yet another teaser image on their official Weibo (Chinese social network) account, let's see what's that all about, shall we.

As you can see in a provided image, this teaser clearly shows the number 8, and also has a battery icon teased along with this number. This is probably Huawei's way to tell us that we can expect quite a substantial battery life of their upcoming smartphone. This doesn't necessarily have to mean the handset will ship with a large battery unit though, of course, especially considering the fact that Huawei's P line devices were always kind of thin. This quite probably means that they will optimize battery consumption and by doing that provide significant battery life to consumers, or perhaps include some sort of battery saving features, who knows.

The Huawei P8 is rumored to sport a 5.2-inch 1080p (1920 x 1080) display along with 3GB of RAM and 32GB of internal storage. Huawei's Kirin 930 SoC octa-core processor is expected to power on this device. 13-megapixel was also mentioned in recent leaks, along with a dual-LED flash and optical image stabilization (OIS). We still don't know the exact date of Huawei P8's launch, but the device will launch next month. Huawei will certainly release at least a couple of more P8 teasers before they actually launch the device, so stay tuned for that.

All in all, you can expect a rather thin device with really solid specifications and premium build. As a side note, Huawei left quite an impression at the Mobile World Congress (MWC) this year when they launched the Huawei Watch, the company's first smartwatch. Huawei is doing a great as far as the design goes lately, and the expectations for their products are really high at this point. What specifications do you expect the Huawei P8 to sport in the end? Let us know what you think in the comments.