Sony is trying to find the right path as far as their mobile business goes. This Japan-based company has been having issues keeping their profits up, as far as their Mobile division goes. The company had to cut costs in 2014, and they have also said that they’ll put more focus on the high-end market in the future. That being said, the company is expected to launch their new flagship, the Xperia Z4, in the coming months. As we’re waiting for them to unveil the Z4, it seems like the company’s current flagship has started receiving the Android Lollipop update.

The company has announced that the Android 5.0 Lollipop update roll-out has begun for the Xperia Z3 and Xperia Z3 Compact devices. Nordic and Baltic area will get the update first, and other markets will follow soon. Other devices from Sony’s Xperia Z series will begin receiving this update in early April. Sony has also shared some enhancements / changes that are coming with this update. Sony said that they re-designed the UI, adapted it to Google’s material design elements. Enhanced notifications and lock screen with fully customizable settings is also coming, same can be said about multi-user profiles and the guest mode. Android for Work support is also a part of this update, and you’ll also get a better storage control and customization.

If you take a look at the screenshot down below, you’ll notice that we’re looking at a firmware build 23.1.A.0.690. This particular screenshot was taken from the Xperia Z3 (D6603) device which received the update already. We’re talking about Android 5.0.2 update here with the 3.4 kernel. There you have it, if you’re living in Nordic or Baltic areas you might want to check if the update is available on your Xperia Z3 / Xperia Z3 Compact device. Keep in mind that it might take a while until the update is available on your device. Also, we’re talking about the unlocked version of these two devices, if you own a carrier-locked model of the device, chances are you’ll have to wait a while to get the update (until your carrier makes it available). 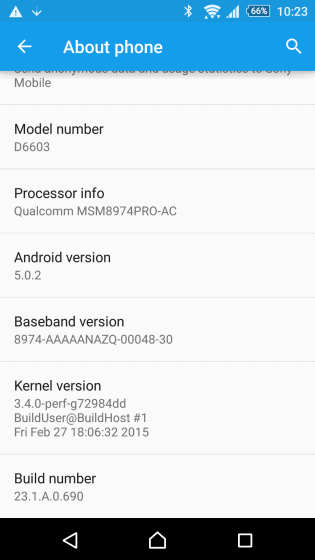