Skip to content
Trusted By Millions
Independent, Expert Android News You Can Trust, Since 2010
Publishing More Android Than Anyone Else
8
Today
54
This Week
499
This Month
499
This Year
118396
All Time Today, in San Francisco, Xiaomi held their first US-based fireside chat. Xiaomi talked to us about the history of the company, which was founded in April 2010. Also about their software, MIUI. Which is updated weekly, and they have over 224 updates over the life of MIUI (from 2010 til now). MIUI and Xiaomi is super popular in China and other parts of the world. MIUI gets a ton of new features each week, including auto upload that’s coming in this upcoming week.

Xiaomi has 5 of the most popular Android smartphones that are activated. That’s 5 out of the top 8. Pretty crazy, right? Xiaomi also is proud to say that their users spend more time in apps than Samsung and Apple users. Which is quite a feat, especially considering how many apps Apple has in the App Store.

When it comes to building the hardware, Xiaomi wanted to build high-performance hardware, with no compromises. Mi2 was the world’s first Qualcomm Snapdragon 600 processor smartphone. Mi3 was the first to have the Qualcomm Snapdragon 800. Mi Note was almost the first to launch with the Snapdragon 810, but the LG G Flex 2 beat them. Redmi is high-performance, but Xiaomi wants to keep it under 1000 RMB. The Redmi 2 is using the Snapdragon 410, along with a 8MP camera. It’s a decent smartphone that’s going for 699 RMB (or about $95). Components get cheaper over time, thus allowing Xiaomi to sell products cheaper and cheaper.

Xiaomi is huge on social media, for the Mi 4, they had over 4.89 billion views on Weibo (which is basically China’s version of Twitter). When it comes to “ads” on Weibo, they got over 2 million shares in just 24 hours for the Xiaomi Mi 4. Pretty amazing.

Xiaomi is #1 in TV’s tablets, smartphones and power bank categories. Which is pretty crazy.

Xiaomi is able to deliver 940,000 packages in one day, at peak times. Average delivery time is about 1.8 days. Takes about 43 hours. Pretty amazing considering how big China is. Xiaomi has been working on building their call center. They also have over 800 service centers across the country. Where they can go ahead and get service done on their Xiaomi smartphones.

Up next is Hugo Barra to talk software and hardware for Xiaomi. So what is MIUI? MIUI is an Android operating system that is completely Android based. It’s developed by users, for users. Hugo says they did not fork Android, they built services and features on top of Android. Similar to what Samsung, LG, HTC and others have done. They are completely Android compatible. MIUI started with a core base of 100 fans, first version came out in August 2010. Very simple and easy to use. 224 weekly updates overall, 225th update will be coming tomorrow (Friday). On their english forum they’ve gotten over 100,000 users for MIUI.en. Over 100 million users running MIUI right now. That is not just Xiaomi phones, but also Samsung, LG, HTC, etc. Flashing ROMs. 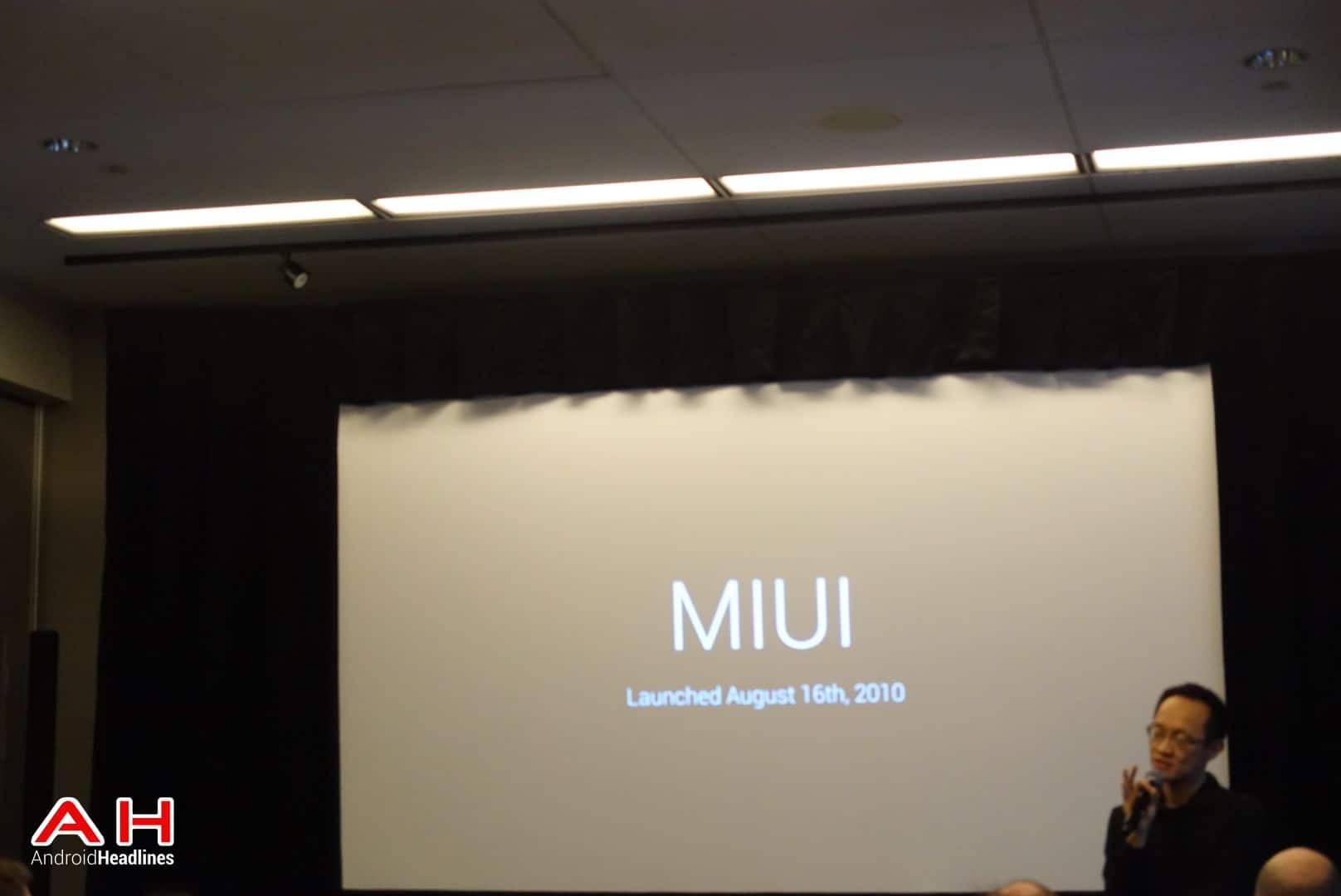 Xiaomi truly thinks that 100 million users is just the beginning. Development started in 2010, and focused on basic functionality. About 2 years ago, they started focusing more on building services. The goal was to build an operating system built for the needs of Chinese users. Optimizing T-9 for Chinese names. Also showing the location of the call based on the area code. There’s also a really sophisticated gender based and age based face  beautification feature in the front-facing camera.

The second insight they had in mind was to build features into their phones to make it easier to use everyday. Xiaomi was the very first smartphone company to implement a flashlight shortcut from the lock screen. Which was a fan suggestion, actually. There’s also a selfie timer, so you can look into the camera instead of looking at the screen. The timer is actually by the camera, so that you are forced to look at the camera.

MiCloud will sync call history, wifi settings, music, positions your apps were in, pictures, and much more. Similar to what your Google account does. But remember, Xiaomi is mostly in China where Google is blocked, so there is a need for them to do this. Cloud Dialer, brings cloud data into your dialer app. So if you get a phone number that’s not in your phonebook it will look it up. MIUI Directory is built into the dialer app as well. So you can access all of these features that are built into the OS. Use it to check delivery status, get train tickets, get a driver (aka Uber), etc. You can also buy movie tickets straight from the MIUI Directory, which is pretty sweet. You can also get in line at the bank before you get to the bank. Using the MIUI Directory.

The Mi App Store is only available in China (Again Google is blocked there, so no Play Store). There’s also the MIUI Game Center, and theme store. So you can go through and find themes for your phone. There are thousands and thousands of themes available. Over a billion themes downloaded last year. Over 9 million people use the Cleaner app, which knows what each file on your phone is for, and can clean out the cache, etc., Think Clean Master, but developed by Xiaomi and pre-installed on MIUI devices.

All Xiaomi phones shipped outside of China will have GMS, which means Google apps will be installed out of the box on their smartphones.

Onto the Mi Note and other hardware. Xiaomi thinks it’s the most beautiful smartphone they’ve ever made. They have a world class design team. It has curved Gorilla Glass 3, and aluminum alloy frame in the middle. We’ll be getting some hands on with this in a few minutes so stay tuned.