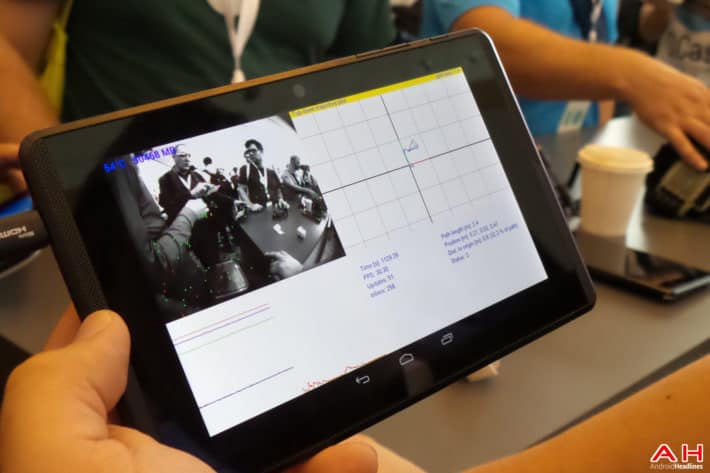 While most of the recent 'Project' talk has been around Project Ara, it should not be forgotten that this is not the only project Google are working on. Or not even the most daring. The folks over at Mountain View are also working on 'Project Loon' which looks to bring internet to places that aren't currently connected using balloons. On top of that, there is also 'Project Tango' which is probably the most interesting of the three. Tango is, in short, Google's attempt to make portable devices like smartphones and tablets more in tune and aware of their environment. To make devices more aware of their surroundings, Tango devices come equipped with a whole bunch of cameras, sensors and gyroscopes. These combined, result in the device's ability to make more than a quarter of a million 3D measurements as the device is moved. These measurements can then be translated (by the device) and used (by the device) to recreate the environment (or whatever the device is focused on) in 3D. It is also worth noting that these devices are highly depth perceptual too, meaning that they can also accurately note distance within their 3D renditions.

Well, if you were hoping to get your hands on any of these devices then you will have to keep hoping for now. It has been noted that Google with LG (who manufacture the devices) are planning to make them more widely available, although this is still some time off. Not to mention, that when they are released they are expected to cost in the region of over $1000 per unit. So, like Glass, they will not be cheap. That said, they are not meant to be cheap devices. Instead, these are intended to be more enterprise-based devices, which can offer multiple industries the ability to make real-world 3D reconstructed environments. As such, the limited (roughly 500) devices that have been released have all gone by invite to various businesses, developers, research institutions and universities.

The folks over at Business Insider have managed to get a bit of a hands-on with one of the prototype devices and needless to say they were impressed with what they encountered. The first two videos by Business Insider (below) show how the device functions. The first highlights how the device accurately maps an individual's face while the second video shows Tango mapping a room. Unfortunately though, according to Business Insider it does currently take the device about 5 minutes to map an entire room. As such, we only get to see a few seconds of the process in motion in the video. Furthermore, they also note that the current prototype requires a very steady hand, as any unsteady movements seem to currently affect the way in which the 3D reconstructions are presented "bits of chairs can end up looking like they're floating in mid-air". That said, the ability of the device is nonetheless impressive. What was also quite curious was that the BI folks managed to get a quick look at an example of what a 3D-environment based game could be like. Of course, this was in a very basic state and more so, only acts as a proof-of-concept more than anything else. Either way though, you can see what the possibility of 3D gaming might look like in the third video below.

If all this had got you that bit more interested in Tango, then as mentioned it will be some time before you get to see a real-life accessible version hitting a Best Buy near you. That said, we did see last week that Tango (like Glass) has 'graduated' from its early stages and moved offices in Mountain View which effectively symbolizes its independence as a Google entity. As a result, we are likely to see more development and news becoming more frequent over the coming months. The device BI got to grips with was the 7" tablet version (there is reportedly a smartphone version too) which came loaded with 4GB RAM, an NVIDIA Tegra K1 processor, infrared cameras and a 180-degree tracking fish-eye lens. So no messing about when it comes to specs here. Not to mention the device obviously comes running on Android. Take a quick look at the videos and click the source link below to find out more. And make sure to leave a comment letting us know what you think of Project Tango.