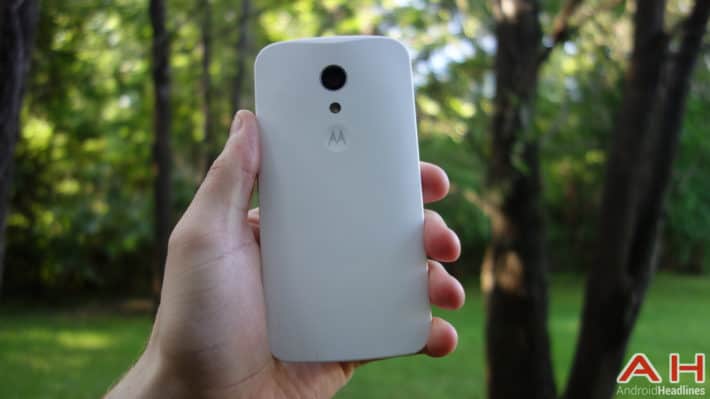 Motorola has quickly become known for their speedy Android updates on their devices, and while the Moto X (2014) was updated to Lollipop before pretty much anything else out there, the Moto G and the original Moto X have had to wait a considerable amount of time longer. Still, the updates to android 5.0.2 Lollipop are starting to roll out to the second-generation and first-generation Moto G devices, however up until now these updates have been sporadic, dotted around the globe with India being one of the first markets to see the update. Now though, we've been passed a tip (thanks Leuan!) that pretty much confirms the update to Android 5.0.2 Lollipop is starting to roll out in the UK, at least for the second-generation Moto G at the least.

We've been passed a couple of screenshots, with the most important one showing us Android 5.0.2 running on the Moto G with a build number of LXB22. The Motorola software version for this update is listed as 22.26.1.titan.retgb.retgball..en.GB.retgb and if you're interested the Kernel is listed as 3.4.42. We've been waiting to see the update to the Moto G hit parts of Western Europe, especially the UK where the original Moto G has proven to be a big success for the company, which is still waiting for the update to Lollipop as I write this. The fact that it's rolling out to the second-generation Moto G is a good sign though, and while Motorola continue to take their time with their updates, it does look like Motorola is ready to finish things up very soon.

Motorola's update to Android 5.0 Lollipop has been a bit of a strange one, as it seemed to stop then start again across the globe. It first hit the second-generation Moto X to much fanfare and then it took its sweet time to hit any variant of the Moto G and even then it was in markets like India and sporadic parts of Europe. The Moto E and the original Moto X meanwhile are still waiting for their update to Lollipop. While this is certainly frustrating for some users, it's often better to wait for a solid update, rather than jump on top of one that's been hastily put together.