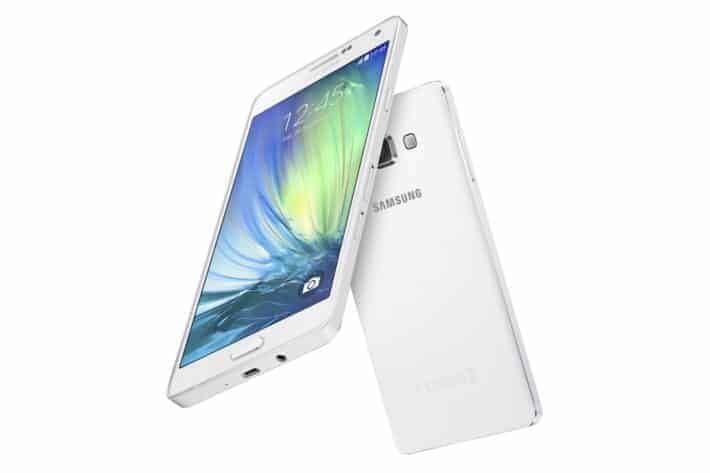 This week, the Samsung Galaxy A7 will become available for pre-order in Europe for â‚¬499 which is approximately $568. It is reported that the Samsung Galaxy A7 will be available on Amazon France as well as Amazon Germany. The phone will be available in black, gold, and white when the phone ships, however, the white version is listed at â‚¬600. With such a steep price hike for the white variant the black and gold versions of the Galaxy A7 are the better deal. When the phone was announced in January it certainly turned heads as Samsung's thinnest manufactured smartphone to date. The Samsung Galaxy A7 measures in at 151 x 76.2 x 6.3 mm which is even thinner than the Galaxy Alpha as well as the Galaxy S5.

While the Samsung Galaxy A7 flaunts a higher asking price than the Samsung Galaxy S5's current price it does offer a beautiful 5.5 inch 1080p display with plenty of power under the hood. The 5.5 inch Super AMOLED screen supports up to 16 million colors made from the latest Corning Gorilla Glass 4 for protection. At the Galaxy A7's heart is the Samsung Exynos 5 Octa 5430 processor supporting LTE, of course. Complementing the Exynos processor is 2 GB of memory with 16 GB of internal storage, expandable up to 64 GB with a microSD card. The 13 MP camera with 4128 x 3096 pixels will snap great pictures no doubt, with Samsung's latest camera software. The front facing camera is a fair 5 MP so you'll be able to take great selfies with this phone as well. To sum this all up the Galaxy A7 will run on a 2600 mAh battery all housed in a metal unibody and come running on Android KitKat.

With the Samsung Galaxy S6 and Galaxy S6 Edge on the horizon, the Galaxy A7 may not fair quite as well as Samsung is hoping.  However, for customers due for an upgrade and in need of a phone now the Galaxy A7 could have a lot to offer. A large screen with performance internals wrapped in a sleek, metal unibody frame make this a great choice if you can grab it at the right price.