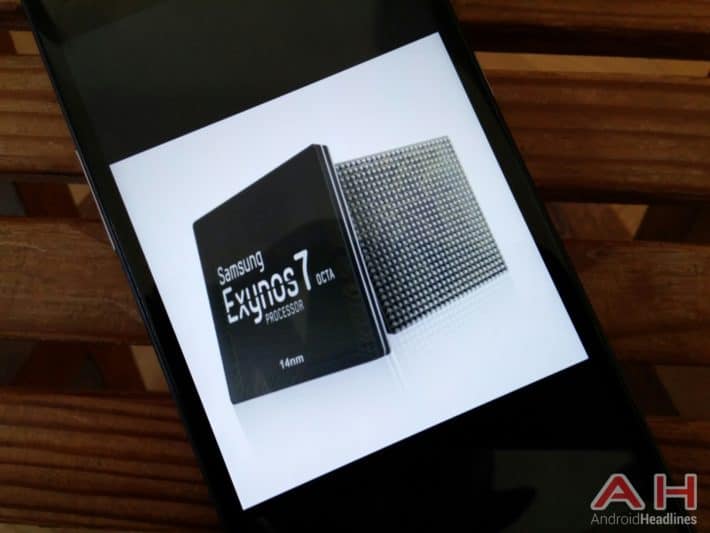 Basically everyone knows by now that Samsung will unveil their Galaxy S6 flagship at their Unpacked event on March 1st as part of MWC (Mobile World Congress) in Barcelona, though this event is technically being held before MWC starts. Anyhow, the Galaxy S6 Edge handset will appear next to the Galaxy S6 it seems, and both of those handsets will quite probably be powered by Samsung’s very own Exynos 7420 octa-core processor.

That being said, the benchmarks thus far revealed the power of Samsung’s chip, at least on paper, it remains to be seen how will it perform in real life, of course. What’s interesting about this chip though, is the fact that it’s built using 14nm technology, compared to the 20nm process that most other manufacturers used. This will be the first 14nm processor out on the market (implemented into a smartphone), and according to the provided data, its power consumption has been reduced by 30 to 35%, which is great of course. Mali-T760 GPU is included with this SoC, and will be there for graphics, of course. Moreover, this processor is made on three-dimensional (3D) FinFET transistor technology which is used to overcome the limitations of the regular, 2D Planar structure technology. This method has been used by Intel for quite some time now, but in their desktop SoCs.

Samsung is very proud of its newest chip, rightfully so, the processor seems really powerful and its power consumption is admirable apparently. As I already mentioned, it remains to be seen how will it perform in real life, but we’ll find that out soon enough. Samsung probably won’t manufacture the Snapdragon-powered variant of the Galaxy S6 handset, as many rumors have stated thus far. Qualcomm has confirmed that a “major company” has given up on the Snapdragon 810 and won’t be implementing it in their device(s). It all adds up, that’s too bad though, I’m sure many of you wanted to get your hands on the Snapdragon-powered variant of the device. This Exynos chip seems really, really powerful and I’m looking forward to see it in action though, what about you?