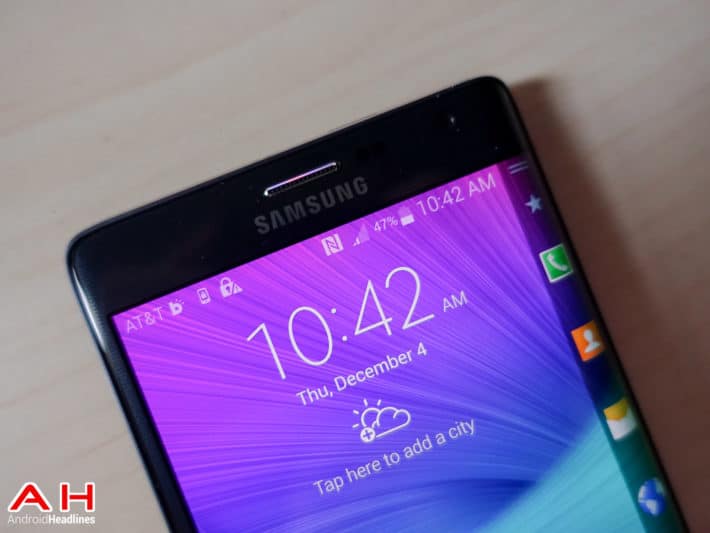 Samsung's Galaxy Note Edge (pictured above) was the company's first device to launch in mainstream quantities while using a flexible OLED panel. Granted, this is not the type of flexible display used in the G Flex 2 or Samsung's Galaxy Round, but the first time Samsung actually went for subtlety, and it seems to be working. The Galaxy Note Edge is never going to sell huge numbers, but as their first mainstream effort, it seems to be selling fairly well. We've heard rumors of Samsung looking to produce a Galaxy S6 Edge model, much like the Galaxy Note Edge, and now it looks like they've filed for trademarks.

As discovered by GalaxyClub, Samsung appears to have filed for the two trademarks with the Korea Intellectual Property Rights Information Service (KIPRIS) and both the Galaxy S6 and Galaxy S6 Edge are listed in the database as of two days ago. Interestingly enough, the Galaxy S6 Edge has the 'edge' in lower-case, but this could be a typo of some sort. The trademarks are indeed in the public database for anyone to take a look at, but there's no other information apart from the fact that the name has been trademarked. The Galaxy S6 Edge appears to be listed as just the "S6 edge", or at least that's what the image lets on, anyway.

Filing for trademarks might not mean all that much, but when we're talking about Samsung here, this is a pretty big deal. Just because Samsung made the Galaxy Note Edge, wouldn't necessarily mean the Galaxy S6 would follow suit, but this is is Samsung we're talking about, and the Galaxy Note and Galaxy S lines are often close to each other in terms of design and features. As for the mysterious Galaxy S6 Edge? Well, all we've heard so far is that it's to be the same sort of design as the Galaxy S6, but with curved edges on both sides, how that would work is beyond us for now, but it sure looks like we'll find out very soon. Especially if these trademarks are anything to go on.