Samsung’s Gear S, pictured above, is just one of the many Gear smartwatches that the company has announced over the last couple of years. While the company is often criticized for releasing too many wearables in too short a time span, it seems to be working, as Samsung continues to lead the smartwatch market by quite a large margin. At least, this is according to figures from the Smartwatch Group, an independent research group that has recently compiled a report of smartwatch shipments for 2014, and it would seem hat looks do matter, very much so.

At the top of the list is Samsung, shipping 1.2 Million units throughout 2014, which is a pretty large number considering that their Gear line of devices only work with Samsung devices. Following Samsung is Motorola with the Moto 360 specifically, having shipped 500,000 units in 2014. Closely following Motorola is LG, with the G Watch line and the Lifeband Touch, shipping 420,000 units in 2014. While Pebble shipped more units than both Motorola and LG, they only managed to secure fourth place, as a result of their market volume of $91 Million, which pails in comparison to Samsung and Motorola’s $300 Million and $125 Million, respectively. 2014 was an interesting year for smartwatches, that’s for sure, with Google finally throwing their hat in the ring with Android Wear and Samsung launching the Gear S, the first smartwatch to function as a phone without the need of one nearby.

Sadly though, Android Wear didn’t quite take the market by storm, but it shipped a respectable number of units. Announcing the Moto 360 along with the Gear Live and G Watch, yet not selling it ’til much later in the year probably didn’t help the initial launch much. Neve mind all that though, 2015 looks set to be a massive year for the smartwatch and wearable technology in general. Pebble have already kicked things off with the Pebble Time campaign, and there’s word that HTC is to launch a new wearable device during Mobile World Congress 2015. You can take a look at the full table from the Smartwatch Group below. 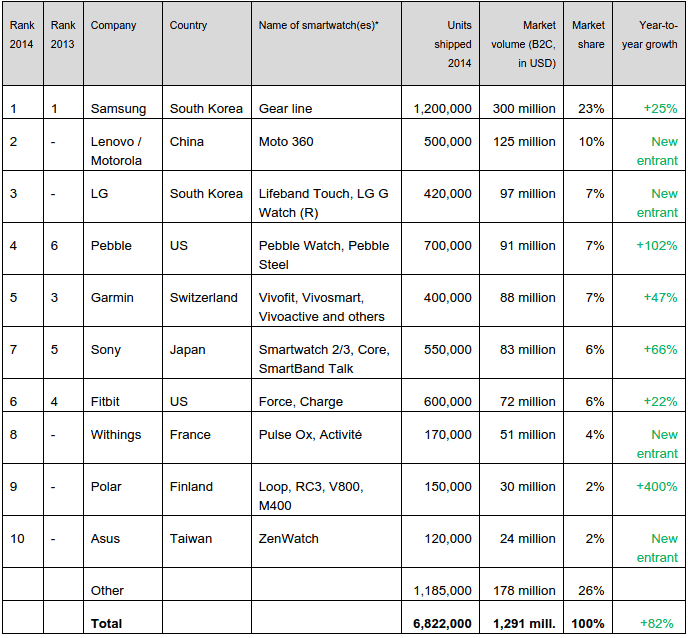