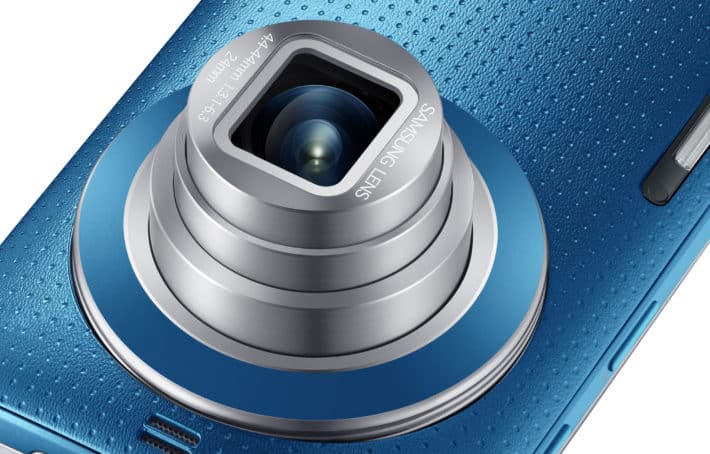 With a new year upon us and new Samsung flagships on the way, it could also mean that we're due to see a new version of Samsung's Camera focused smartphone, which in this case is the Galaxy K Zoom in its latest iteration. According to these patents discovered by SamMobile and found over at Patently Mobile we might be looking at a tweaked design for the Galaxy K Zoom smartphone which launched last year. The patent design looks fairly close to the current Galaxy K Zoom design except for a slightly altered back shape and some more square lines for the front display.

Other than that we can't really fish out too many details as the drawings only show what the potential new variation of the device could look like. As such, there are no details here about the specs or hardware either, nor any information about a launch date or launch regions. The design is distinctively Samsung with the home button we have come to know from the brand, and we can see on the bottom edge there's an inclusion of a dedicated camera button for taking pictures instead if having to manipulate the snapper with the on-screen touch based controls. As this is seen on many regular smartphones from other OEMs, it only makes sense for Samsung to keep it included in a smartphone that focuses on being more of a camera than a smartphone.

SamMobile points out the possibility of an S Pen slot on the top, right in the center of the device. This is one potential scenario although it could also just be the 3.5mm audio port for headphones, which to us seems more likely. We can see from the image of the Top and Bottom views that there is no other port on the bottom except the microUSB port for charging the device, and there are no visible ports on the sides for a pair of headphones, and this would have been an odd placement anyway. With that being said we think it's safe to say that the round open port on top is just your standard 3.5mm audio jack, although an S Pen certainly would have been cool in a new Galaxy K Zoom. It also appears that speakers are to be situated on the top of the device, as opposed to on the bottom which is where we usually see them in other handsets. Keep in mind that these are just patent drawings and are not indicative of a final design, so things are subject to change, this is also assuming that Samsung puts out another "Zoom" series smartphone.