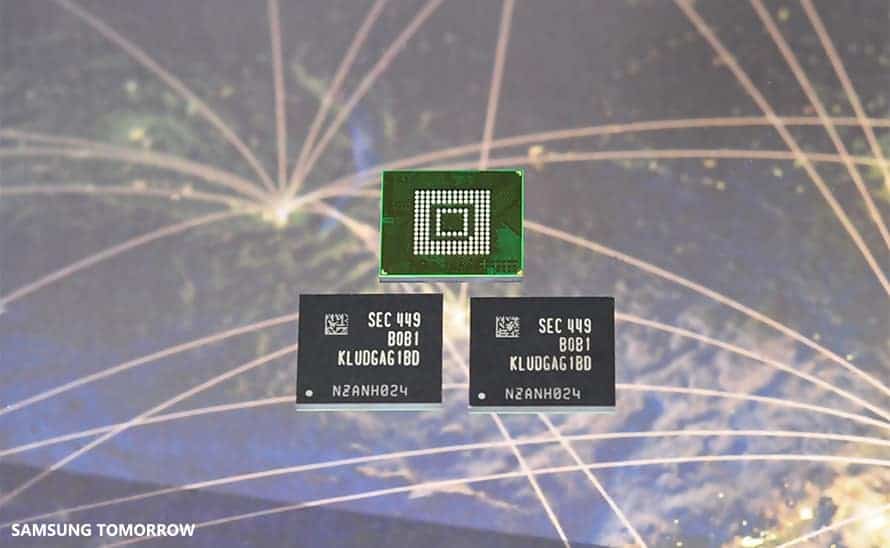 As we're waiting for Samsung to announce their newest flagship(s) at the company's Unpacked event in Barcelona on March 1st, the company keeps on releasing new tech. Samsung has announced via the Samsung Tomorrow blog that they developed yet another great mobile device component, the ultra-fast 128GB flash memory. This memory is based on UFS 2.0 standard and is 2.7 times faster than eMMC 5.0 which is currently being used in smartphones. This new storage option will reportedly be able to processor 19,000 input / output operations for random reading per second, thanks to the UFS' "Command Queue" technology.

These are really great news, no matter which way you look at it. 128GB of storage which you can fill up and don't worry about any sort of slowdown or anything of the sort, sounds great, doesn't it? 128GB of storage won't be the only option, of course, the source says that 32GB and 64GB variants are also available. Now, the question remains, will this memory ship with the upcoming Galaxy S6 handset(s) or not? Well, it might. Samsung did say that the flash storage is now available, that they're mass producing it, which more or less means that they could easily implement it in the Galaxy S6. Samsung's teasers have also been pointing in that direction, promising a lightning fast performance, we thought the teasers were touting only the Exynos 7420 processor, but this flash storage might be the part of the picture as well.

Anyhow, the Galaxy S6 will launch on March 1st and we'll get all the necessary details then. We'll be at the scene in Barcelona and will do our best to provide as much information as possible when it comes to Samsung's new devices, so stay tuned for that. We've seen a ton of Galaxy S6 leaks, and it is more than certain that the device will sport a quadHD display, be made out of metal and that the 14nm Exynos 7420 64-bit octa-core chip will power on the device. That being said, do you think the Galaxy S6 will utilize Samsung's new flash storage, or not?