Samsung is usually pretty good at keeping their devices under wraps when it comes to leaks, but they that doesn't mean they don't see their fair share. We've already seen a few alleged leaks of Samsung's new upcoming flagship device, the Galaxy S6, which is thought to be getting unveiled at the upcoming Mobile World Congress 2015 event that happens on March 1st in Barcelona. Samsung has even put out their own invitations to their event being held on that day which tease the public with something that looks like a curved edge display similar to that of the Galaxy Note Edge. We've also heard rumors of a possible Galaxy S6 Edge too, which is becoming more and more believable.

The latest leak gives a little bit of insight on what sort of dimensions we might be able to expect from the Samsung Galaxy S6, as a source in the Korean media seems to have stumbled upon and put out what looks like design schematics of the phone. The image(shown below)lists that the Galaxy S6 will be 6.91mm thin, which is quite the decrease in thickness compared to last year's Galaxy S5 which measured in at 8.1mm thin. The images also show that the Galaxy S6 will be 70.81mm wide, which in contrast to the Galaxy S5 at 72.5mm is actually not as wide on the top and bottom of the device.

When it comes to the height of the Galaxy S6 according to these schematics, we'll be looking at 140.3mm, in contrast to the Galaxy S5 which was 142mm tall. When it comes to the display, excluding the bezels, this schematic shows that the display will be 107.32mm tall on the sides and 64.36mm wide on the top and bottom. The front facing and rear facing cameras are also displayed in the image along with the LED flash on the back and the multiple sensors on the front face. All the ports are displayed too as are the power button, home button, and volume rocker, which seem to all be in the same spots as what we've seen from leaks of the body of the phone. We don't know for sure if these dimensions are correct, and we won't know for sure until Samsung themselves unveil the device, presumably in a few weeks. If they are correct however, what do you think? 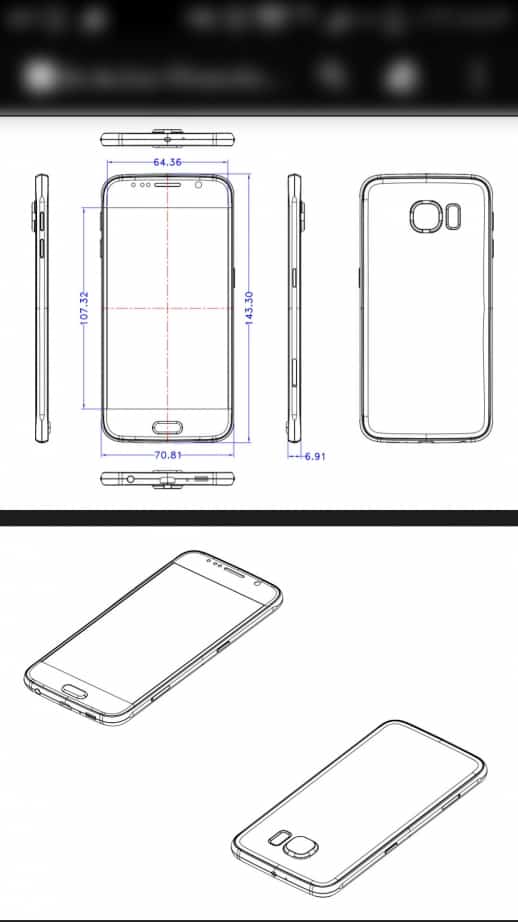