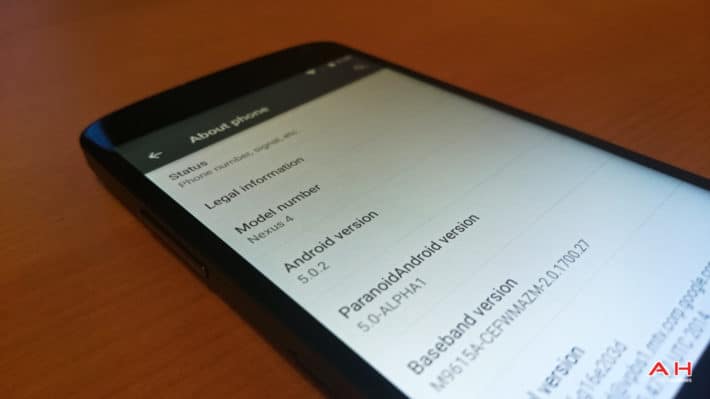 Paranoid Android has taken a little bit of a break it seems these past couple of months, or at least that's the way it seemed because we've been so used to them being open and active on the Google Plus community. On the contrary though they were on anything but a break as they were hard at work getting the first official PA lollipop build ready for our consumption. Early this morning the Paranoid Android team announced that they're finally back and they have released the Paranoid Android 5.0.2 Alpha 1 build for those who run the PA ROM and were waiting to have some Lollipop goodness come our way. I myself am one of these people even though I don't use my Nexus 4 as my daily driver anymore.

There are some things you'll want to make note of if you're looking at downloading and installing the Alpha build of PA 5.0. This is an Alpha build, so even though the PA team has deemed this software stable enough for release to the public, it may still have some inconsistencies and bugs(I haven't come across any as of yet but I've only been on it for the better part of 30 minutes or so)and you'll want to be prepared to come across those. Secondly is that it is absolutely recommended that you do a complete wipe and factory reset before switching to this ROM build.

One more thing is that since you have to do a factory reset, you'll probably have to go and download Gapps again as with all PA ROMs the Google apps like the Play Store, Gmail, etc. don't come installed with it. I recommend you do a quick Google search for Gapps 5.0 or 5.0.1 before you start the installation process of this ROM. As for the changes here, besides all of the Lollipop goodness you can expect like the new status panel up top, the Material Design, and the animation heavy transitions and such, PA has listed that the major shift is the update of the baseline to AOSP Lollipop 5.0.2. They have also included the ability to disable the heads up feature completely among other enhancements to it. You may or may not notice the quick unlock feature that was added in, but it is there in case you should want to enable it.

CM12 Theme engine has also been added for those who like to customize there PA experience with a theme. Lastly, you can use the volume rocker to switch between songs when the device is locked, the power menu has been extended, and the volume panel has been animated in a more material manner. Everything so far feels fluid and smooth, so for those wondering how it runs even on an older device like the Nexus 4, it's as buttery as it can be. Mind you I have next to no apps installed on my device at this point so that is likely contributing to the speed. If you want to get this installed on your own device, head to the source link below and grab the link from PA to their main page where you can select the correct download for your device.