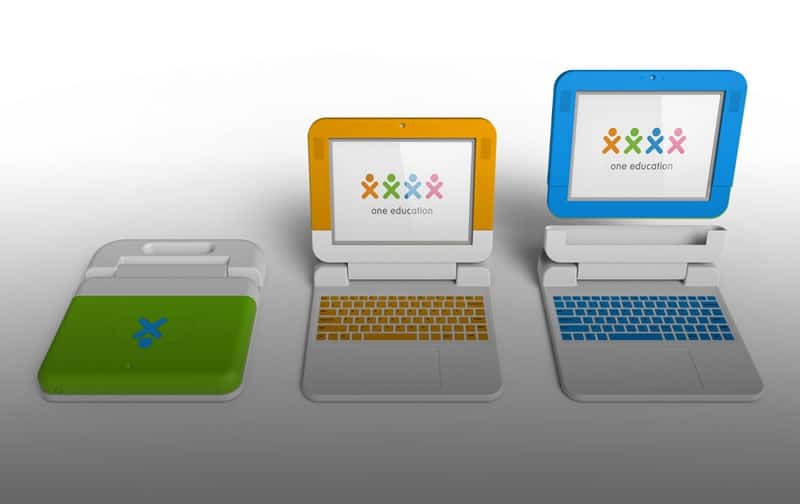 Meet OLPC, which stands for One Laptop Per Child.  They manufacture laptops meant for education that run a specialized suite of education software and have special software additions to make them prime for education's rigorous tasks and demands.  You may remember one of their products; it was a white laptop that had little antennae-like things that swiveled up on either side, and the accent color was this rather froggy-looking green.  With that in mind, why is a laptop manufacturer important, especially if it's not Google and their Chromebooks?  Imagine Project Ara, the modular phone system, applied to a laptop.  that's why OLPC is relevant.

The company is set to release a new iteration of their XO education-focused laptop, and this one will be called the XO Infinity.  As tired of the word 'infinity' as some might be, this one might deserve the name.  So, imagine a chunky, well-built education-centric laptop.  Then imagine that that laptop's display can undock from the keyboard and be used as an education-centric tablet.  That's what's confirmed so far, through leaks and sneak peeks of course, about the XO Infinity.  but, we have good reason and proof of the idea within OLPC to bring an Ara-like modularity to this interesting device.  So, the pictures are at the bottom, with the modular ones being renders or proof-of-concept images from OLPC's website.

So, the idea of an education laptop is nothing new, because Apple has marketed its iPad as such, as well as Google marketing its Chromebooks similarly and succeeding to a greater degree.  But OLPC's approach may get another piece of the market that neither Apple nor Google, nor any other manufacturer of this type will get: the modular, replaceable parts laptop.  A few images have come up that, if correct, could give away that OLPC plans to make the XO Infinity with removable parts.  In the images, you'll see the expected battery module, a Wi-Fi or wireless card for Internet access, a camera (likely front-facing) if in need of web-camming, and a possible (and highly probably) processor, RAM, and storage module as well.  Since those are removable, we can assume that there will be options, but we have no real clue what they could be except improvements over the base part(s).

OLPC has had a rough time getting its items to market in the past, given its failure to launch a followup to a previous device, as well as the not-so-successful follow-through on the low price of another previous device.  Do you think that this idea, the modular laptop, would be one that might influence some degree of change?  Or is it, like Project Ara may end up being, just a fad and attempt at new technologies?  Let us know down below.