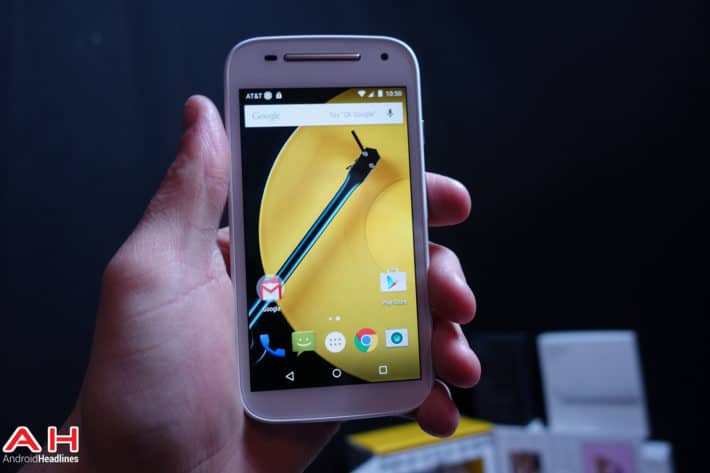 The Moto E 4G LTE was announced this morning, with a rather interesting press conference. But now it's time to talk specs. We've got all the specs you could ever want here in one post. The Moto E 4G LTE features a 4.5-inch qHD (960×540 resolution) display which also uses Corning Gorilla Glass 3 and an Anti-Smudge coating. We've got the Qualcomm Snapdragon 410 running the show. Which is a 1.2GHz quad-core processor, with an Adreno 306 GPU. The 3G model is running on a Qualcomm Snapdragon 200 processor which is also a 1.2GHz quad-core processor but with an Adreno 302 GPU. Both are running at 400MHz. On the Memory side we've got 1GB of RAM and 8GB of storage. But Motorola has included a microSD card slot. For the battery, Motorola has thrown in a nice 2390mAh that should get you about 24 hours of usage. For the camera, there's a 5MP camera on the back which does f/ 2.2 aperture, Quick Capture, Tap anywhere to capture, 4X digital zoom, slow motion video, burst mode, auto HDR, Panorama and Touch to focus. On the front, there's a VGA camera for selfies.

We're looking at Android 5.0 Lollipop here. As Motorola says "all the features of Android without all the Bloat". Dimensions are 129.9 x 66.8 x 5.2-12.3mm (based on the curve). The Moto E 4G LTE weighs in at about 145 grams. It is a single micro SIM card slot, instead of dual. That will likely come later. Other connectivity includes a micro USB port, 3.5mm headphone jack, Bluetooth 4.0 LE, WiFi 802.11 b/g/n, 2-mics, loudspeaker, but no NFC. For location we have GPS, AGPS, and GLONASS. Sensors included are the Accelerometer (there's actually two of them), Ambient Light, Proximity and sensor hub.

The Moto E comes in black and white. But the band around the phone is removable and comes in yellow, turquoise, blue, raspberry, purple and red. Motorola is also selling their grip shells in yellow, charcoal, turquoise, blue and raspberry. It does feature a water resistant coating and supports GSM, GPRS, EDGE, HSPA and 4G LTE networks. Below are the bands it supports by model: