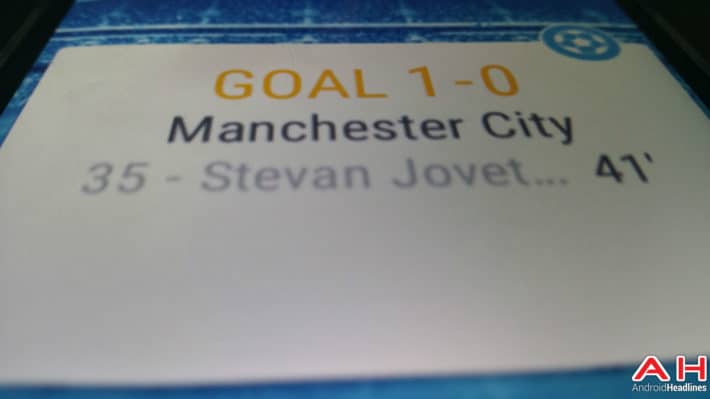 If you are into your football (by football we are talking about Soccer for the U.S. folk out there) then you will know that right now we are in mid-season. The January transfer window just closed and it is now time to see who's purchases will pay off and who's will not. Man City spent a bucket load on bringing in Wilfried Bony from Swansea while Crystal Palace finally bought Wilfried Zaha from Manchester United. He never really was a Man U player though, was he?

Anyway, if you are into your football then you might be interested to know that as well as spending the most on any player in this transfer window, Manchester City are now also accredited with being the first Premiership league (any league actually) to bring to the Play Store their own Android Wear app. 'CityMatchday Wear' as it has been dubbed, is your one stop shop to everything City and is designed to give you a matchday feel on your smartwatch. If for whatever reason you cannot attend a home or away match, then the app will bring you all the details of all live games as they happens. These include notifications on goals scored, goals conceded and of course, any own goals that might unfortunately happen.

As well as the standard in-game notifications, the app will also offer Wearers match statistics including fouls, possession and any bookings or cards awarded. Not to mention you can check out who the man of the match was. Text commentators is also possible and you can get to read the best of the City fan tweets as they come in. If you fancy giving the app a try, then it is now available to download for your smartwatch via the Play Store. The first real test of the app will be tomorrow when Man City take on Hull? Are you going to the game? Will you be giving the new City Wear app a go? Not a City fan? Would you like to see your team bring out their own Wear app? Let us know your thoughts and who will win tomorrow?