There have been smartwatches available in the market for some years now, but they are still considered to be something of a niche product. The signs are that this will change in 2015 when the Apple Watch launches (brace yourselves, it’s coming). I also suspect that Android Wear will be considered as having also been launched in 2015, despite some reasonably encouraging sales numbers in 2014. I might be wrong, but the Apple reality distortion effect is a great way of getting customers to part with ever increasing amounts of money. Allied Market Research have written a report detailing where they believe the smartwatch market is going given what we have seen so far and what we believe will happen.

The headline figure is interest: Allied Market Research believe that the global smartphone industry has the potential to reach almost $33 billion by 2020, which will be somewhere around one tenth of projected global smartphone revenues. One-third of this will be from the United States of America and the rest from across the world but with a bias towards Asia Pacific and China. However, they are also expecting a number of changes within the industry and the biggest is a switch from the current “extension smartwatch” device to a “standalone smartwatch.” Most devices sold today, including all Android Wear units, are intrinsically linked and dependent on our smartphone (or tablet) for the data connection: the research points towards an increasing proportion of devices being sold that have their own independent connection to the Internet. We’ve already seen some movement in this respect thanks to the Samsung Galaxy Gear S and some Android Wear smartwatches having features not currently supported by Android Wear (such as the Sony Smartwatch 3 having a WiFi radio).

Let’s also not forget the ongoing work and advancements when it comes to the Internet of Things, where individual devices will have their own identity alongside their connection to the Internet.

The report details the market share between the operating systems preferred by smartwatch manufacturers and it’s expected to be similar to the smartphone arena. We’ll have Android, iOS and “others,” which will include independent or proprietary operating systems and also-rans such as Microsoft Windows. And as with smartphones, it’s the developing markets – chiefly in the Asian Pacific region including China – that’s expected to drive sales, too.

What brands can we expect to see? Samsung and Apple feature prominently in the reports; Samsung are likely to replace all of their Android-powered wearable devices with Tizen, which we already know is to be their operating system of choice for Internet of Things products. The Apple Watch, as yet unreleased, is probably going to make a significant impact on the market. Some of the early businesses into the market, such as Pebble, will need to invest in research and development to remain current. We’ve covered some of Pebble’s comments here at Android Headlines recently, raising an eyebrow at their dismissal of the relevant of Google Now.

$33 billion is a large enough market such that the major smartdevices players will not ignore it, but in the context of smartphone revenue it is not enormous. I expect some manufacturers to decide not to compete, given the stiff competition and high risks. Others may launch products in 2014 and 2015 and then retreat. I don’t believe we’ll see the smartwatch becoming a ubiquitous tool as the smartphone has. However, tell us your thoughts in the comments below. Do you think that the smartwatch will revolutionize how ordinary people use technology, or will it remain something of a niche product? 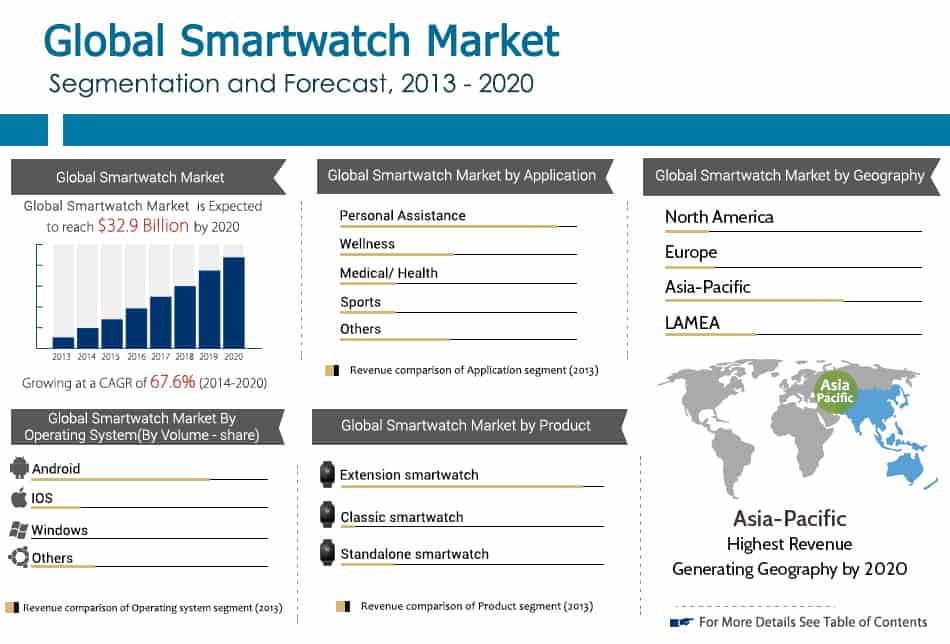