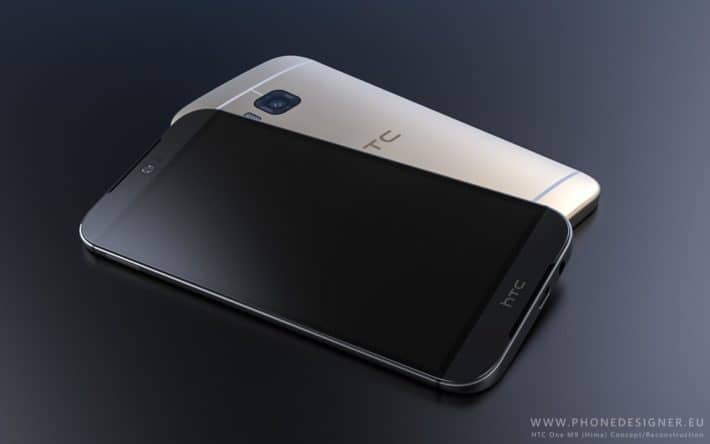 Earlier today, we reported on a render of the BoomSound speaker from a concept design of the HTC One M9. It now turns out that sneak peek was part of a larger set, put together by Phone Designer on Facebook. The whole set of photos look brilliant and have been put together using information dotted around the Internet on what the HTC One M9 looks like. Using leaked blueprints and such, Phone Designer has put together an excellent collection of 3D concept renders and while these could miss the final mark by a country mile, they look brilliant regardless.

When HTC first released the HTC One, which we now know as the M7, they did so with a striking new design that focused on delivering one device you could pretty much use for everything, hence the HTC One moniker. Its metal build and curved back were great and gave the One an excellent feel in the hand (even if it was extremely slippery). Last year, the HTC One M8 built on that design language and delivered something a little curvier, something a little more elegant and gave use a more rounded look and feel. This year, HTC seem set to further build on the One design, but declutter everything and offer a cleaner overall look. That's what these concept renders from the Phone Designer are designed around, and if the final product looks anything at all like this, I'll be impressed.

These are of course just renders once again, and they're not live photos taken of the device itself, but rather a sneak peek of what could be the next HTC flagship. Either way, it's just nice to take a look at some good-looking phone design. A lot of consumers – myself included – with think more about what their smartphone looks like rather than its features and software. Luckily for me, my Xperia Z2 is a good-looker as well as being gifted with some great software features. If this is what the HTC One M9 looks like come Mobile World Congress, then I might have to rethink my upgrade strategy.