We're just a couple of weeks out from HTC and Samsung's big press conferences, actually it's less than two weeks from now. We will be there to see what the two have to show off. But in the meantime we're getting leaks left and right for the HTC One M9 and the Samsung Galaxy S6. Both of which will be announced on March 1st in Barcelona.

The HTC One M9 is looking like it might be pretty similar to the M8, except it'll have a much higher megapixel camera. We're hearing a 20.7MP camera from Sony. Which is the same camera that's in the Motorola Droid Turbo, Xperia Z3 and Xperia Z2. And it's a great camera. Now, Upleaks has posted a screenshot of all the APKs that are going to be on the HTC One M9 as part of the system dump. Through a quick glance, I don't see anything interesting in there that might lead to some new features, but we can see that both Facebook and Twitter will be pre-installed. Which isn't much of a surprise, most manufacturers have those two apps pre-installed these days.

It may seem like there's a lot of APKs here that will be pre-installed on the HTC One M9, but it's important to remember that a lot of these work in the OS, and will not be in the app drawer. They are needed in Sense to make things work, like the wifirouter.apk. So while there's 132 apk's listed here, I doubt we'll see more than about 50 apps pre-installed, and that includes all of Google's apps and stuff like the calculator, Alarm/Clock, etc.

March 1st just can't come soon enough. How many of you are excited to see the official HTC One M9? We're hoping it can continue HTC's trip back to profitability, they got close in 2014, and hopefully they can continue that road in 2015. 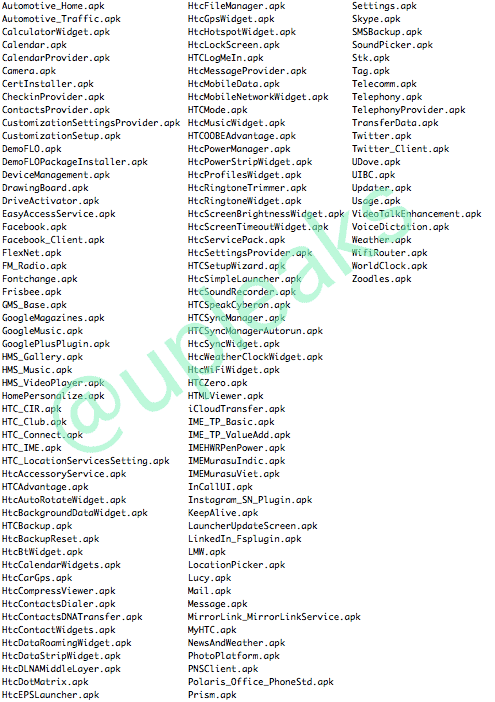