For the third year in a row, the Google Play Store has more developers creating apps than Apple’s App Store. In 2014, for the first time ever, the Google Play Store has more apps than the App Store. The App Store is still growing, don’t get me wrong, but Google has pulled ahead in two important categories. Google is now hosting apps from almost 400,000 developers, and the Play Store has over 1.43 million total apps. Google also added more new apps in 2014 than Apple did. You should no longer be hearing anyone talk about how developing for Android is a bad idea. The numbers show more developers than ever are creating great Android apps and putting them on the Play Store.

Last year, over 128,000 new iOS apps were added to the Play Store. Google hit almost 150,000 new apps placed in the Play Store. The fastest growing categories for Android apps were Games and Photography, which is more proof that Android has caught up to iOS on the hardware and the software side. Android cameras are better than ever, and the hardware can handle more intense graphics that make for a better gaming experience. The Play Store also hit 388,000 developers, beating out Apple with 282,000 devs. “With the most apps and largest developer community, Google Play is starting the new year with a kick,” says this report from appFigures. “Market fragmentation and varying device capabilities don’t seem to detract developers from making Android apps. But, with the upcoming Apple Watch, Swift, and a larger screen, Apple is giving developers a lot to be excited about.”

The report also looks at the number of apps and developers in the Amazon Appstore, which trails as a distant third behind Google and Apple’s offerings. The Amazon Appstore still grew by significant numbers year-over-year, hitting 293,000 total apps. By percentage, Amazon added just as many developers are Apple did last year. Google had more developers release apps for the Play Store than Apple and Amazon combined. That’s some serious growth and will help devs with android app monetization. Head over to the appFigures blog to read the full report. 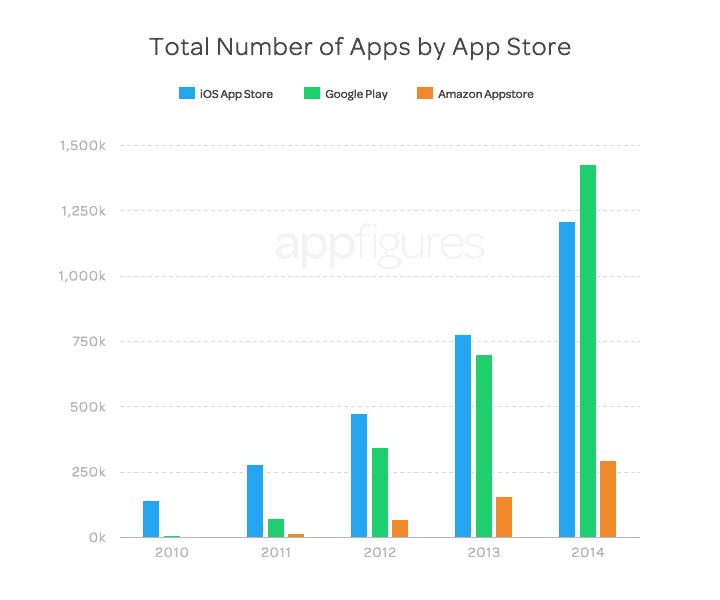