Skip to content
Trusted By Millions
Independent, Expert Android News You Can Trust, Since 2010
Publishing More Android Than Anyone Else
1
Today
61
This Week
816
This Month
3814
This Year
121424
All Time It appears that Android enthusiasts using the Firefox browser are now blocked from accessing the Google Play Store. Upon trying to enter the store, they are prompted with a “browser no longer supported” message, and they’re advised to access the Play Store via the official application instead. No other browsers are currently showing this issue.

This is probably an attempt from Google to redirect some more users to use their app in order to collect data from them. Another theory is that this is just a temporary issue which will be fixed, but it came pretty sudden and it wasn’t as a result of a software update. There is a workaround: simply visit the Google Play Store with the Firefox browser and select ‘Request Desktop Site’ from the drop down menu in the right corner. This will access the website as if you’d be visiting it from a desktop computer. 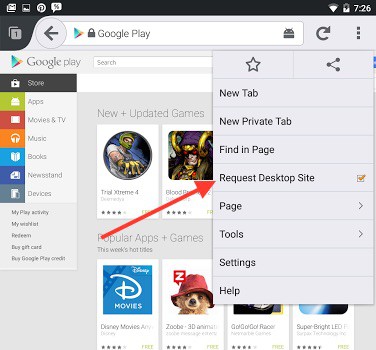 No problems have been reported on other browsers like Opera or Chrome (Google’s own browser), so it might be an issue with Firefox itself. There is a noticeable user reaction on the Hacker News forum, so Mozilla or Google will have to respond soon in order to make sure that this issue doesn’t escalate.

Firefox Mobile is definitely the only blocked application from accessing Google’s store, and some users are claiming that this is because the tech giant implemented some features that aren’t available on Firefox, though this is unlikely – why would Google implement anything that isn’t supported by Firefox Mobile? It might be that Google is trying to discourage the use of browser for the Google Play Store in order to improve it, but their service could definitely do with some improvements, some of which we’ve detailed in a previous post.

It’s worth noting that Firefox Android does have a marketplace built inside the app which gives you access to FirefoxOS apps that can be used as full Android Apps. These apps are serious competition, and it’s just another reason why Google might be trying to get Firefox users to use the Play Store instead. Again, the reason why the service is blocked on Firefox Mobile is unknown and is subject to speculation at this point.