It was only last month when we reviewed Lenovo’s Yoga Tabet 2 in our dual review of both the Tablet 2 and Tablet 2 Pro. So you might be wondering why we are reviewing it again. Well, the last review of the Yoga Tablet 2 was of the 10 inch version. Since then, we have managed to get our hands on the slightly smaller 8 inch version and so we thought it would be worthwhile letting you know how this one stacks up. A point to note though, much of the 8 inch version is identical to the 10 inch option and as such you will here a lot of comparisons between the two. That said, time to crack on with our thoughts on the Lenovo Yoga Tablet 2 8-inch Tablet.

Editor’s Guide: This is the ‘Lenovo Yoga Tablet 2’ but for ease of reading we will simply refer to the device as the “Tab 2” during the rest of the review. In terms of usage, the review is based on a two-week testing phase. 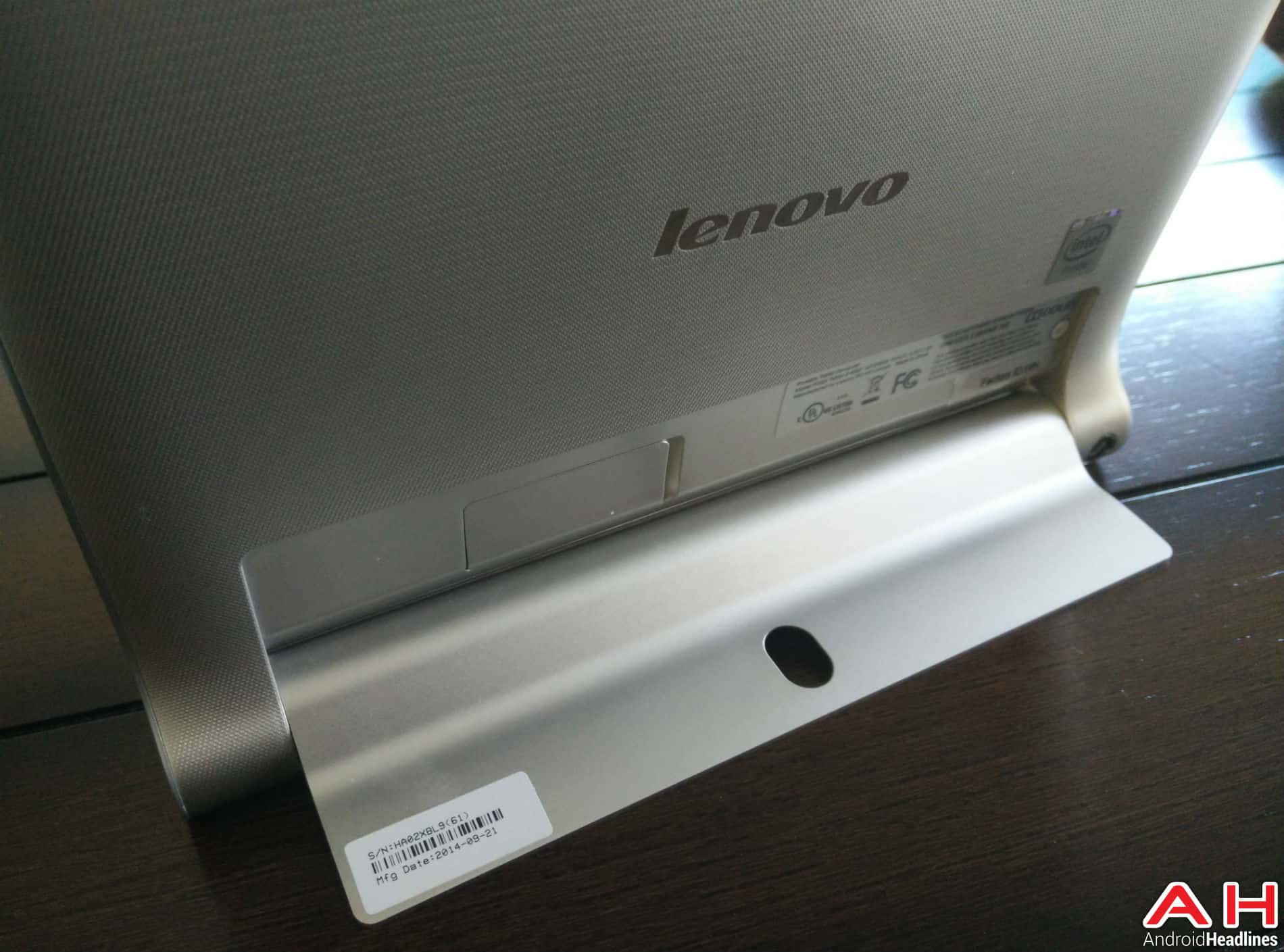 To all purposes, this is an identical looking device to the Tab 2 10 inch version with the same aluminum design running throughout. Once again, the device is almost entirely aluminum based with the exception of the glass screen. The front of the screen comes with the same front facing grill speakers while on one side of the device is the power button, volume controls and micro USB charging slot. The other side simply offers the single entry 3.5mm jack socket. The screen itself (technically) is identical to the 10 inch version with the same FullHD screen. That said, due to the slightly smaller size of the display, the resolution does feel that little bit sharper than on the bigger version. Thanks to the combination of a tighter-sized screen coupled with the same 1920 x 1080 resolution, watching movies or game playing is excellent. If there was a complaint on the screen, there is an element of noticeable glare from the display and as such when watching movies you will be noticing your reflection looking back at you, more so than on other tablets. That said, it is a minor criticism compared to the quality and clarity of the display in general.

Moving on to the back of the device, once more the 8 inch and 10 inch versions are identical. As we have come to know, the big selling point of the Yoga is the stand. After all, it is this multi-positional stand that effectively gives the device its ‘Yoga’ name. Compared to the previous version (Yoga Tablet not Tab 2 10 inch), the stand adjusts to a much greater degree. Instead of only the three setting adjustment, this one allows for a much greater and fluid level of adjusting. The stand itself its a little tough to adjust and does require more force to rotate into place then you might expect. On the upside though, this need-of-force does at least suggest the stand is built to last. 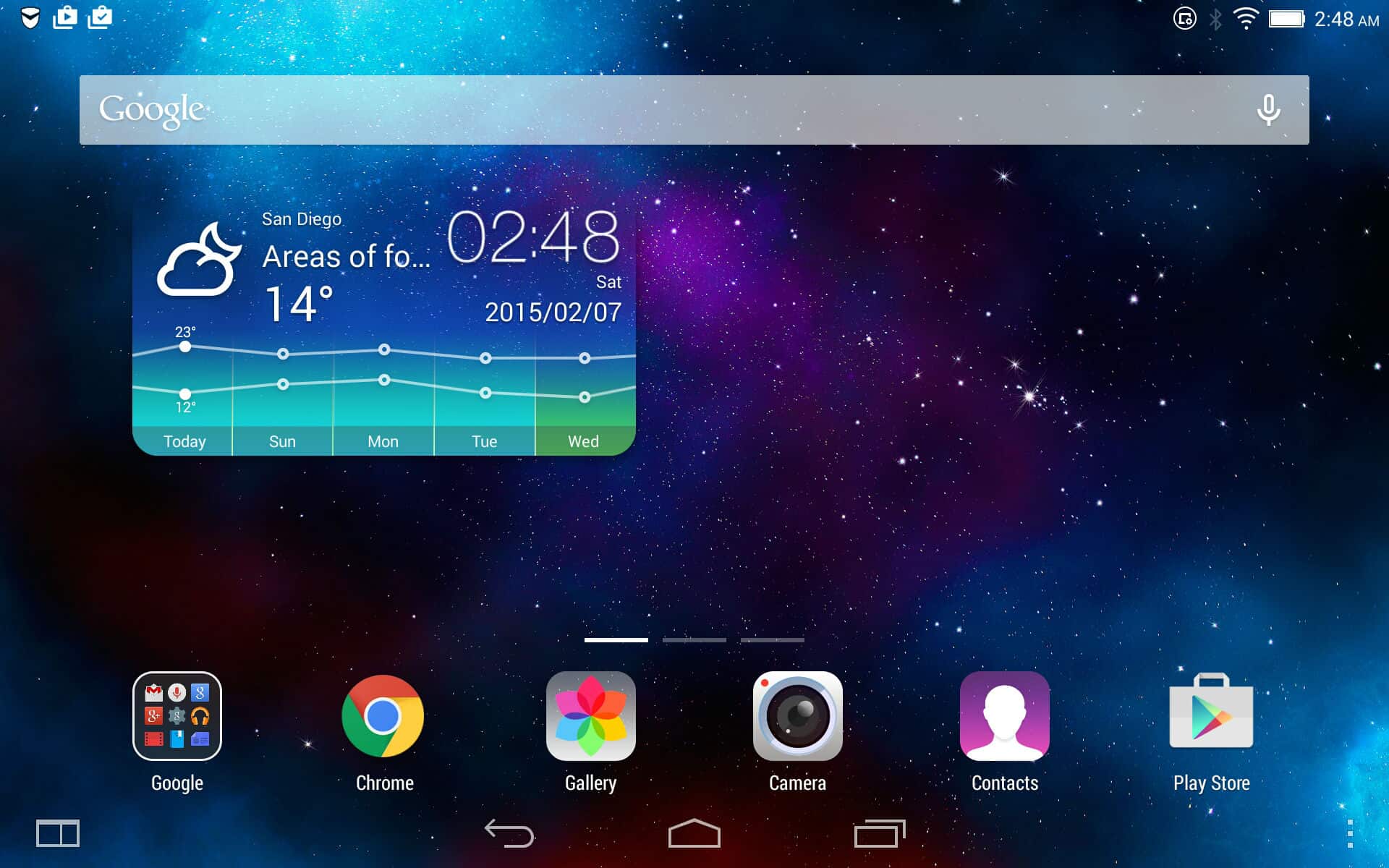 In terms of software, there is no noticeable differences between the 8 inch and 10 inch versions. The same software is in place on both sized devices and as such, the 8 inch Tab 2 suffers in the same respects. The software is certainly the weakest aspect of the Yoga tablets. In fairness, the software is greatly improved from the predecessor Yoga Tablet and is more fluid and less sluggish. That said, it is still far more sluggish than you would see on a Nexus, Samsung or other major manufacturer’s offering. The software feels slow and moving between menus is unfortunately, less responsive than one would like. On a positive note there were no major issues noted with the speed to which apps would open or close. 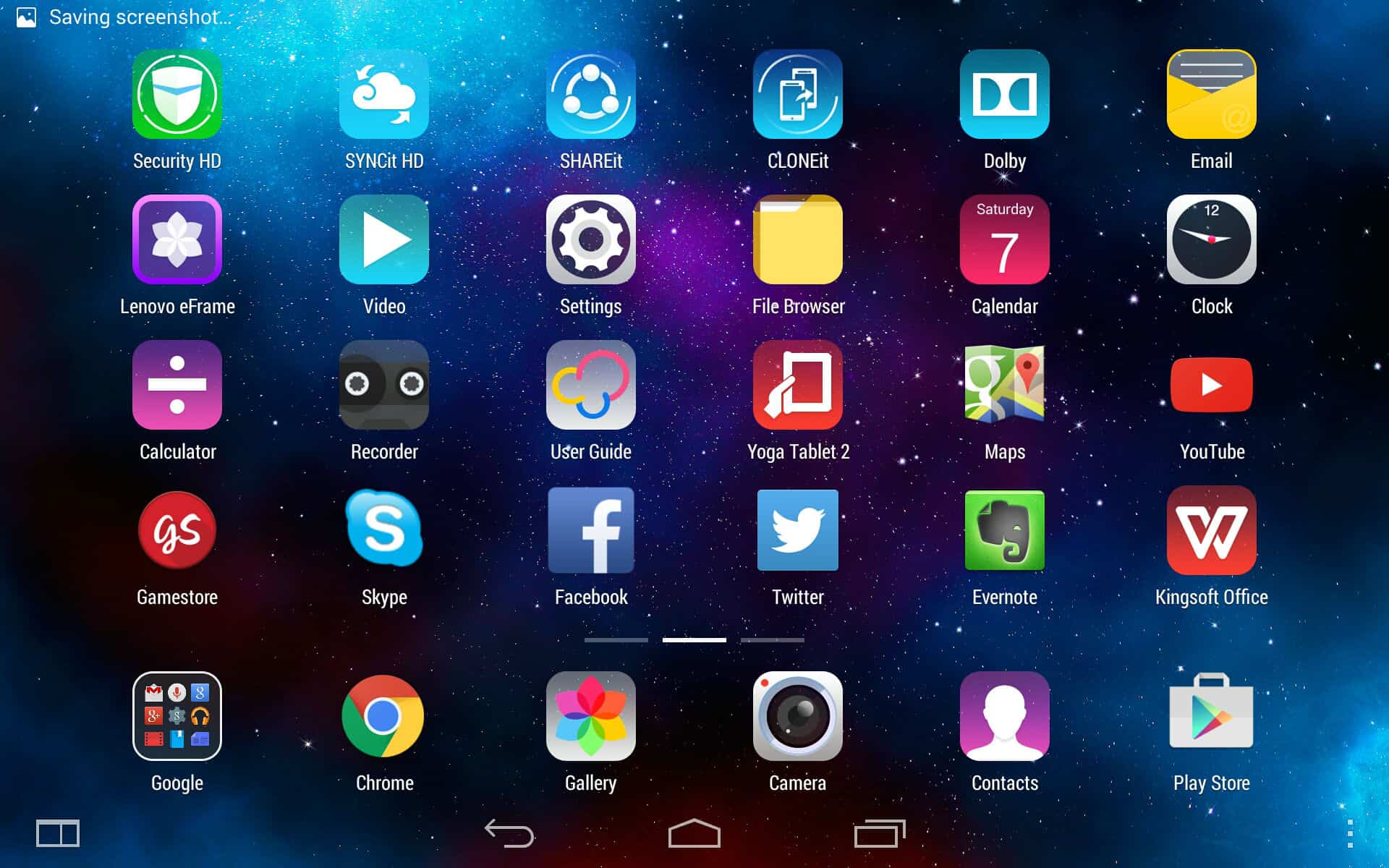 Moving on from the speed and response of the software, just like the 10 inch version, this one also is far more iOS like then one would expect. If you have never used a Chinese OEM device and moved directly from Apple to the Tab 2 you would feel right at home. The settings menu is pulled up from the bottom and there is no app drawer. All apps are always present on the main screen with no ability to hide them away in your drawer as you would expect with android. Not to mention the general layout of the settings menu is clearly highly iOS influenced. 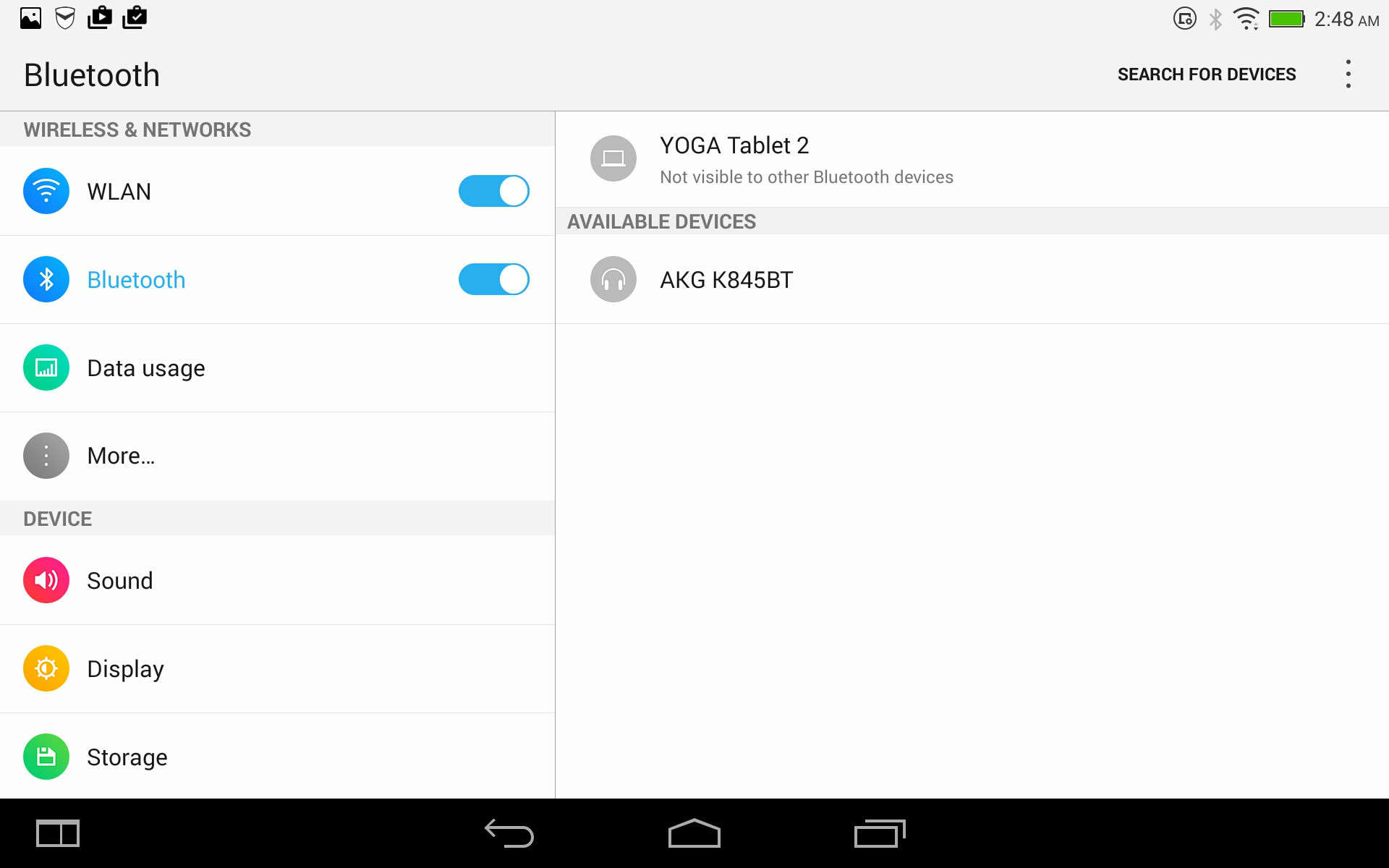 In terms of bloatware, there were no major issues in this respect. There is of course, a number of Lenovo based apps like Security HD, SYNCit HD, SHAREit and CLONE it and these do become unnecessary evils. After opening once, there did not really seem to be a time when they were used again and instead sat in the app tray untouched. However, compared to what you might find on an average Samsung device, the level was minimal. The device also comes preloaded with a number of your more generic offerings like Facebook, Twitter, Evernote, Kingston Office, Amazon Kindle and Gapps.

Compared to the last edition of this device (Yoga Tablet), the introduction of the multi-window feature is a neat feature and does occasionally come in handy. That said, the response, use of feature and general feel of multi-window was not to the level we see from Samsung. What’s more as the screen is smaller on this Tab 2 compared to the 10 inch version, this feature felt a little less useful. Especially when you consider the slight sluggish nature of the software. 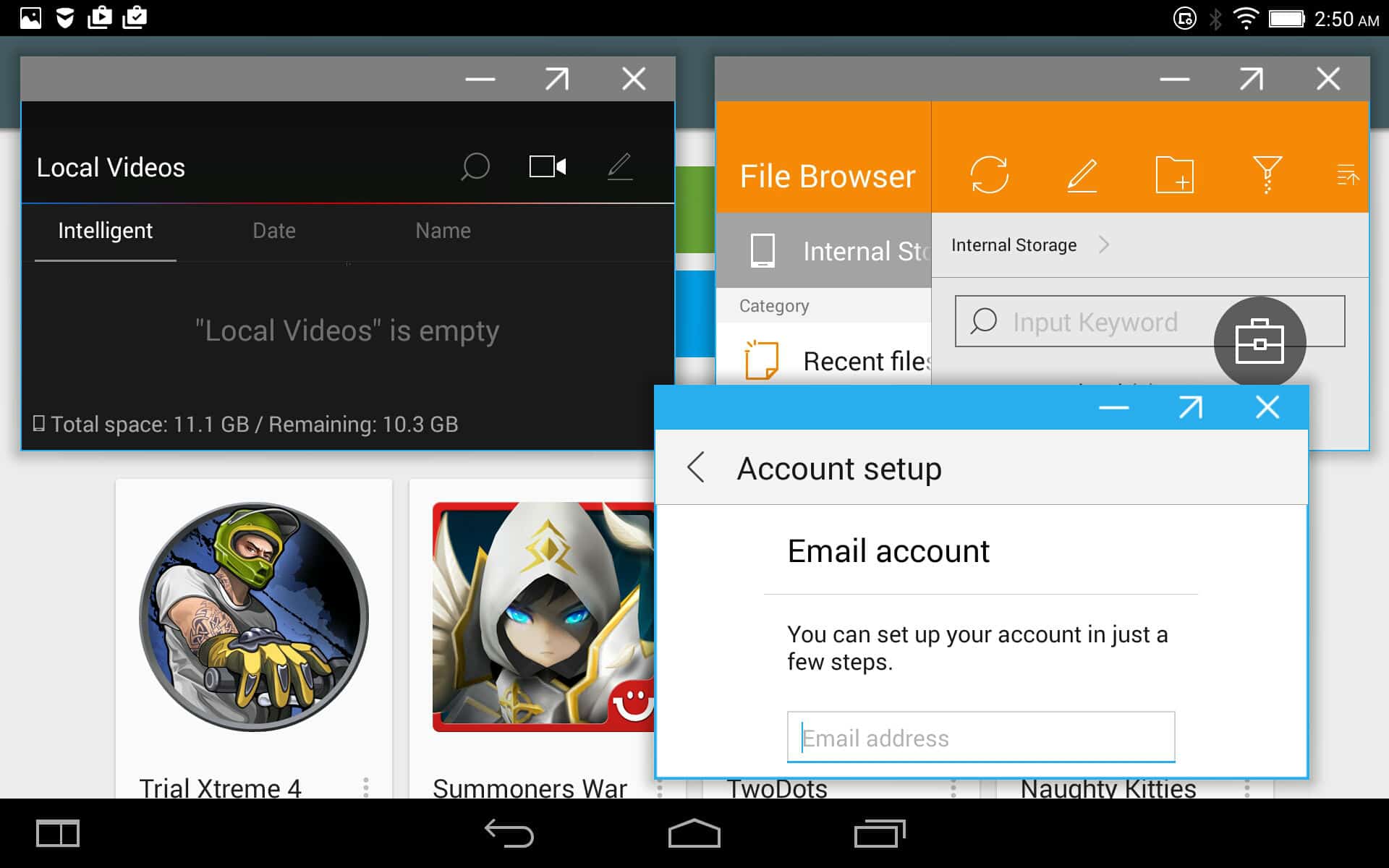 On a positive note, it does have to be said, that game playing on the Tab 2 was excellent. This is where the software excelled compared to other tablets. A number of games were played over the review period and there was never any noticeable lag or sluggishness noted. In fact, during Crazy Taxi, the gaming experience at times felt almost too fast. Although, that cannot really ever be a bad thing. 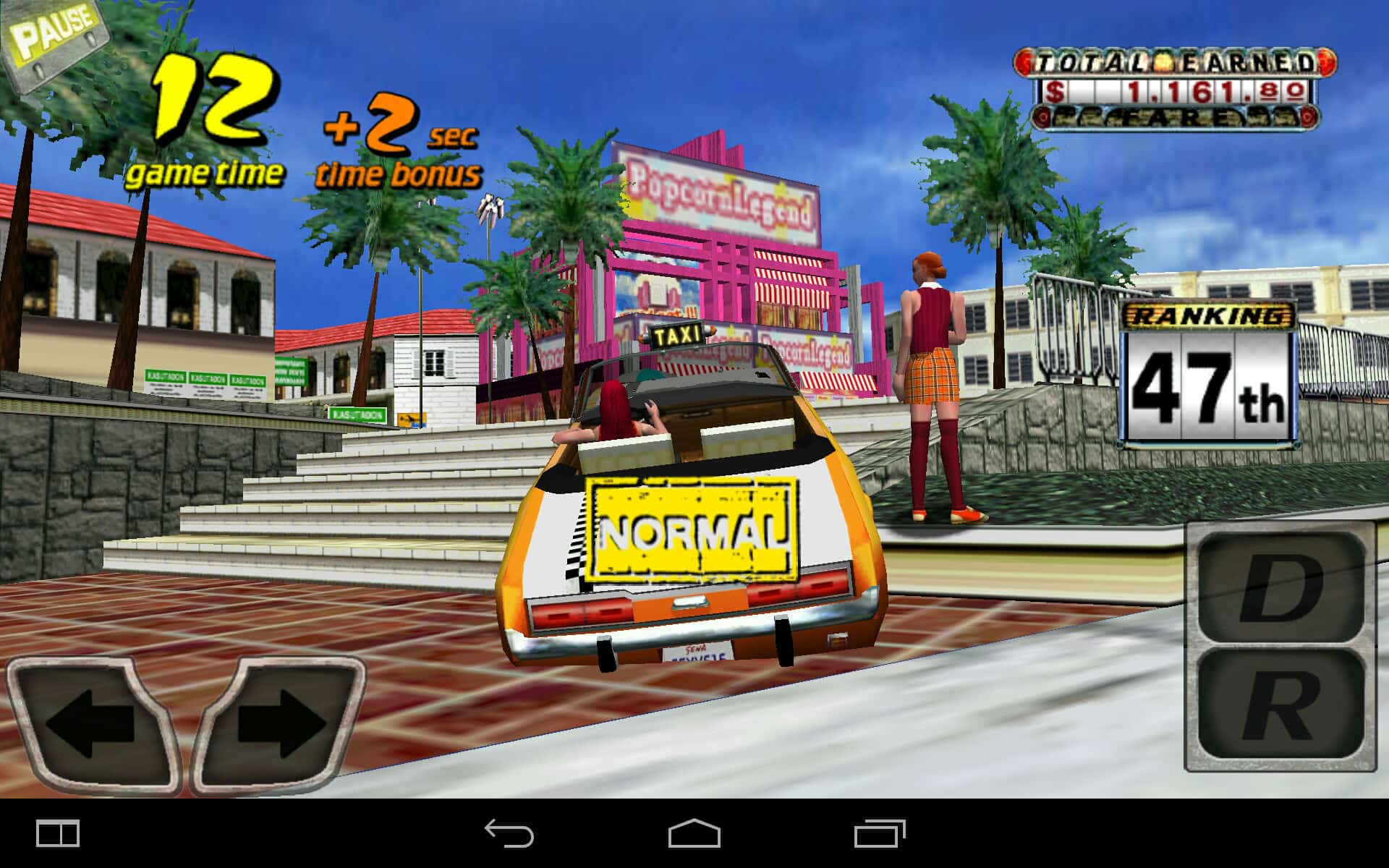 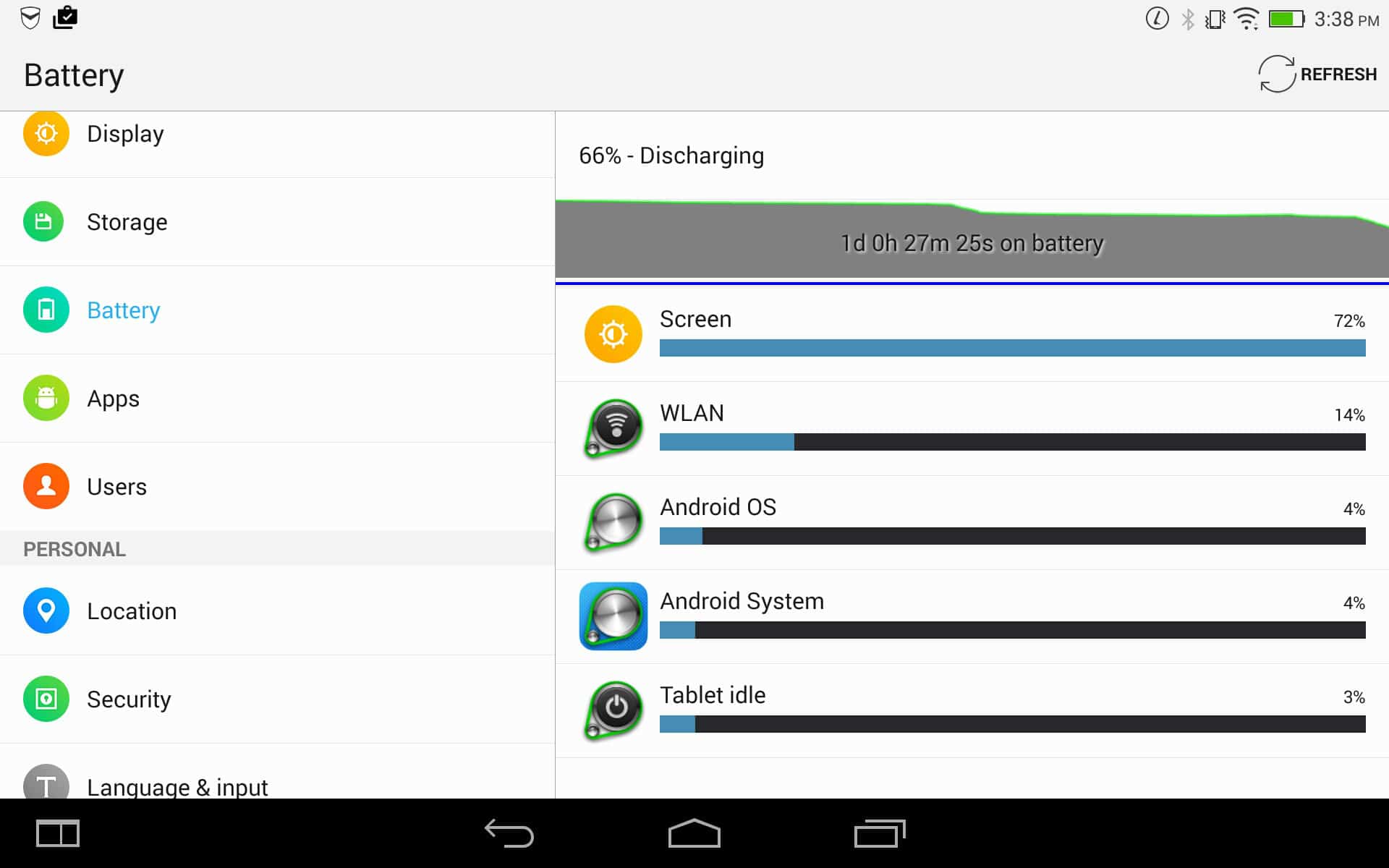 As we have come to expect from the Yoga range of devices (and as we previously discussed in the last review), battery life is excellent on these devices and this was no different for the 8 inch version. The Yoga tablet simply lasts and battery life was never an issue. The device can be left on standby on an almost indefinite basis. As long as you charge your device at least once in two weeks than standby will not kill off the Yoga tablet. When being more heavily used battery life was still sufficient with a similar level noted with the 10 inch version. Screen on time typically consisted of an easily achievable five/six hours of more heavy usage (YouTube/gaming). 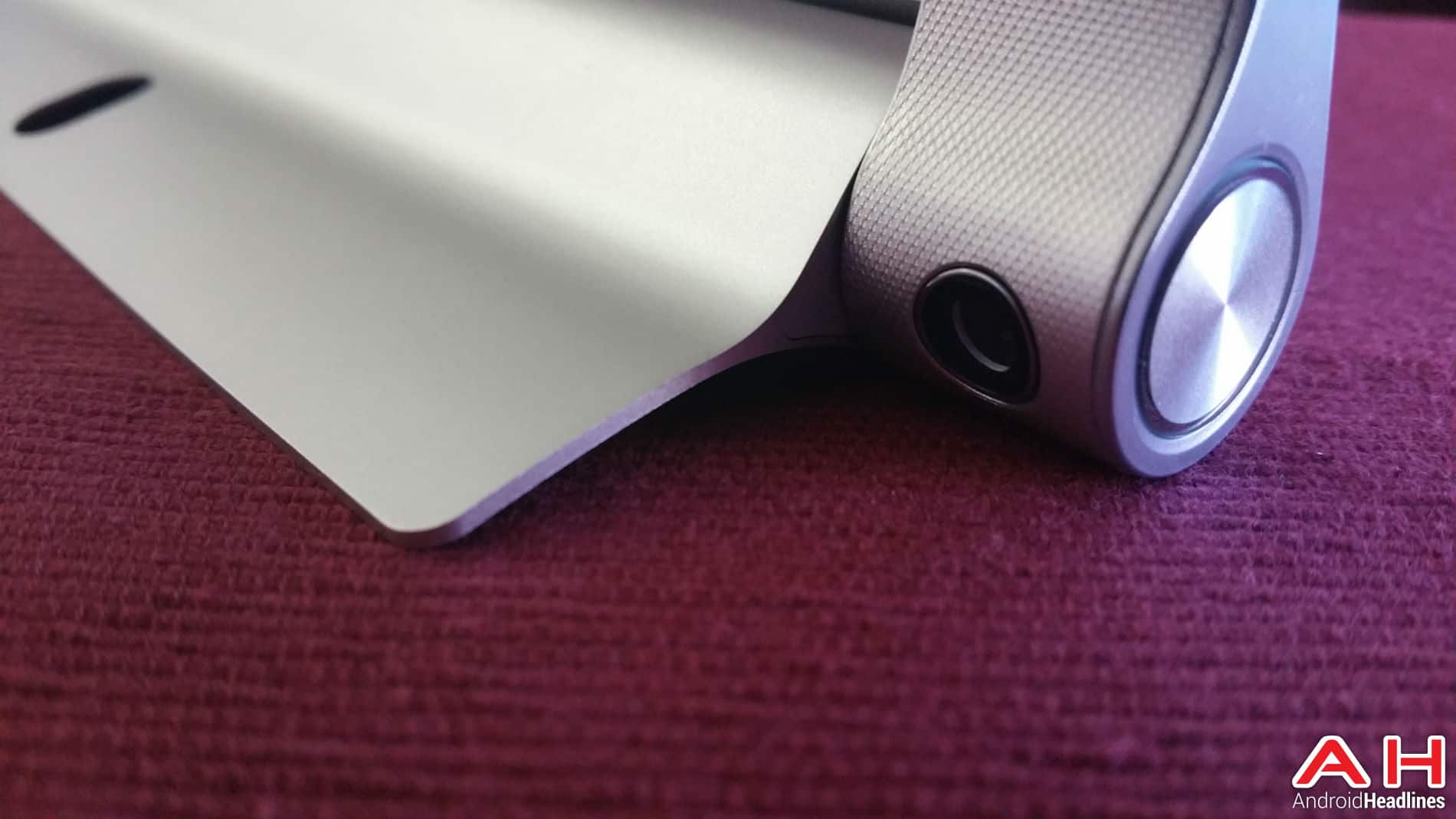 Just like the software, the camera was a sore point for the Tab 2. First up, there is a massive elephant in the room which needs to be addressed, before we get to the actual quality of the images. The positioning of the camera on the Tab 2 just seems wrong. The camera is unnaturally positioned on the rear of the battery (stand) and as such sits where your fingers naturally sit when holding the device. On the most superficial level, this results in your fingers always in the way when preparing to take an image, before remembering you have to rotate the device (upside down) before you can take a decent image.

In terms of the actual cameras, the device does come with an 8-megapixel real shooter but the quality of the shots are minimal. Some will argue that tablets no longer need a decent camera on the back although, personally would disagree. Any device which is intended to be portable and does actually come with a camera, should place a greater emphasis on camera ability. This is definitely an area Lenovo still need to work on with the current Yoga range. Selfie-wise, the camera performs a little better in this respect with a 5-megapixel camera on offer, which did takes some fairly decent self-shooting images.

You can check out the quality of the main 8MP rear camera images taken below. At The End Of The Day… 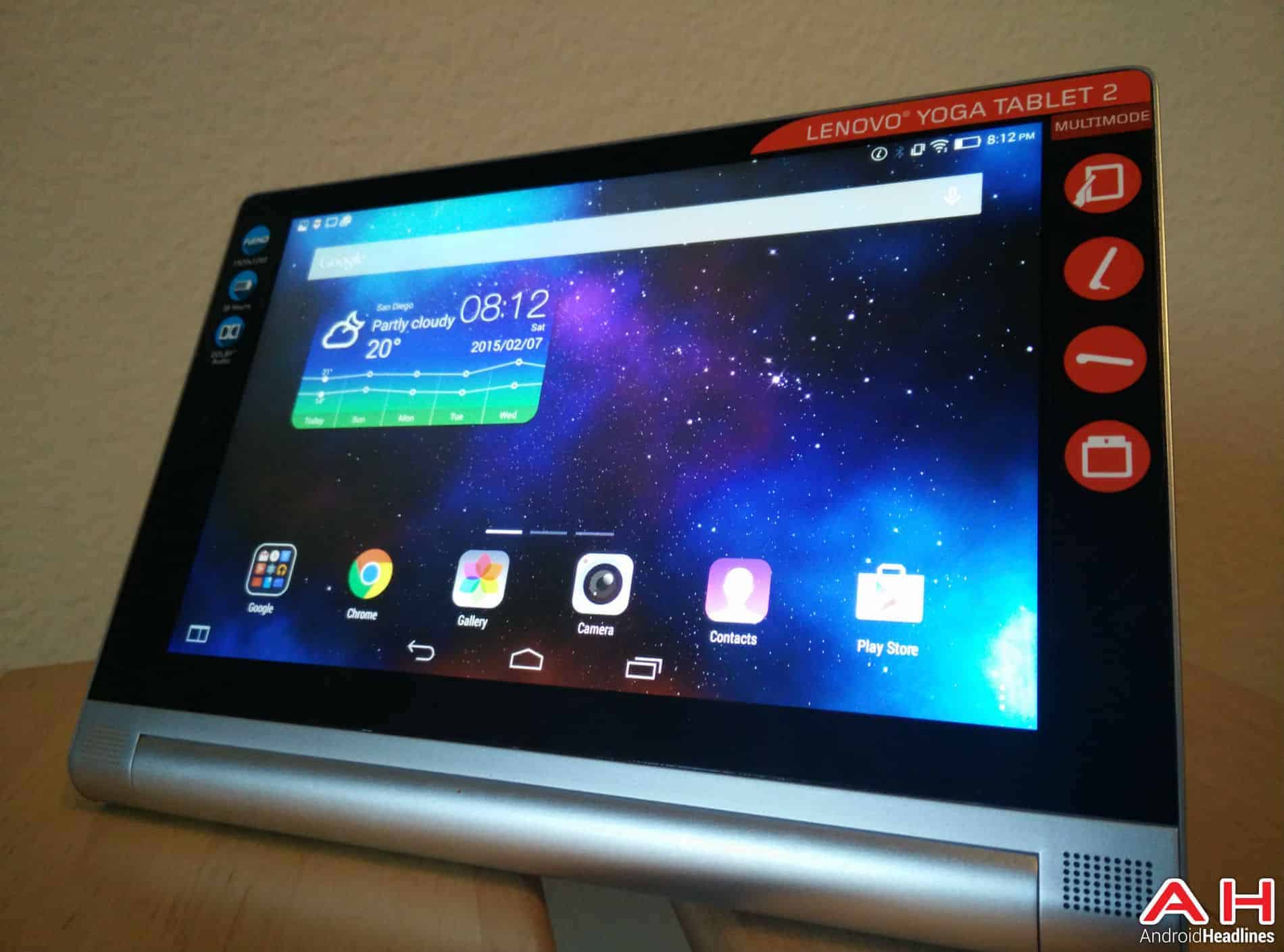 …This is a Yoga Tablet and as such there are things you can expect to be in place which you will get. The multi-function purpose of the tablet is the big selling point. If you want a tablet which can be adjusted in multiple angels, used in multiple ways and for multiple reasons, then the Tab 2 fits the bill. In actual fact, the Tab 2 works really well as a stay-at-home unit and would easily fit in, in your bathroom, kitchen, office or bedroom. That said, do we buy tablets to be a stay-at-home product? As a more portable option, it lacks significantly. The design of the unit means it is not the easiest to carry. The camera is of a minimal quality and lacked any notable features. Not to mention, the positioning of the camera just feels fundamentally wrong. In terms of performance, the software has improved but is still not to the same level as what is offered by other manufacturers. Should you buy a Tab 2? Depends. For the $250 price tag, for a stay-home unit, sure. For a cutting edge device which you can bring everywhere and use for multiple purposes, probably not.